For many years, the formula of the LEGO games released has remained unchanged. You fight your way through various franchise levels from the Marvel universe about Lord of the Rings, Star Wars and Co. and continuously collect items. It's also quite fun and I don't want to speak badly. However, the actual meaning behind the originally created LEGO bricks has been eclipsed.

The developers of ClockStone and their publisher Thunderful Publishing probably saw it in a similar way and therefore thought of a new trick for their LEGO Bricktales game, which was released on October 12, 2022. The focus should be placed primarily on creative building. Stefan Ibels

Our inventive grandfather needs help. Thus begins the adventure into which LEGO Bricktales throws us. After getting himself into a mess in his workshop, we need to get him out of it. A small, helpful robot, which is our companion during the game, appears and explains the mechanics and the controls to us briefly and compactly. So we manage to free our grandfather without any effort. He then takes us to his run-down amusement park, which is in danger of being closed down by the LEGO authorities. Of course we don't allow that and help him to get the amusement park back on track.

We do this by traveling through a portal to five different worlds with our robo-companion "Rusty". If we help the residents there, we'll get a lucky crystal at the end, which we can use to repair the broken attractions. 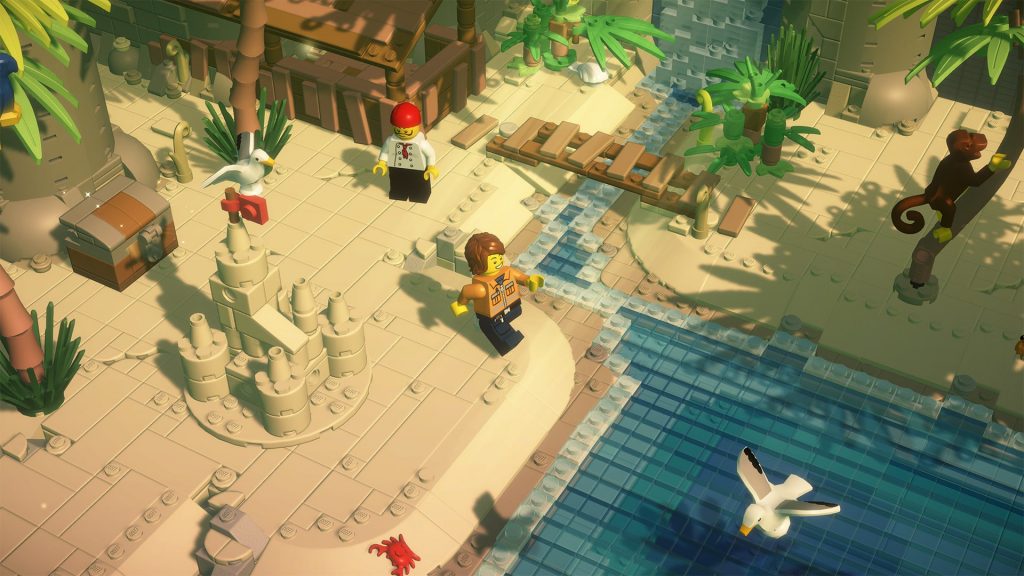 LEGO Bricktales manages to completely avoid violence. So you never have to fight. The focus is on the construction: In the different worlds, which are all built like beautiful dioramas, you build different objects. You often build bridges or crossings, for example to get to the other side of a gorge to continue the story there. For each building you get a small collection of stones that you have to use to complete the task.

You don't have to use all the stones. You always have a goal that absolutely must be fulfilled. How accurately you do this is entirely up to your creativity. So if you build a bridge, for example, a test robot has to cross it at the end without the bridge collapsing. Only then is the task considered completed and you can cross the bridge in the respective world yourself. After completing the respective task, a sandbox mode is unlocked, in which you can decorate your building even more beautifully. However, tasks do not always only consist of stable buildings, there are also sorting puzzles or beautiful building tasks waiting for you, such as beautifying the royal throne room with free buildings from given stones.

On the upper world you walk through the beautiful worlds, meet people who need your help, collect animals and solve smaller puzzles to get a certain currency, which differs from world to world. With this you can buy new equipment for your character from a merchant ghost that hides in every world. However, this is only of a cosmetic nature and will not help you in the game itself. 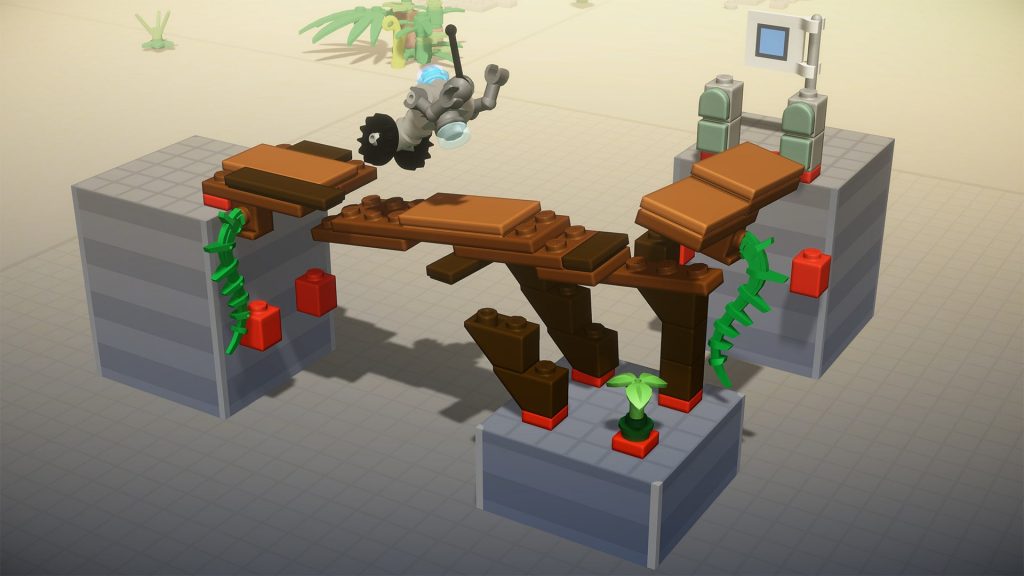 The small puzzles and the search for treasure chests all have a little The Legend of Zelda flair and are quite fun, even if they are never too demanding.

Each world also grants you a new ability that will allow you to solve more puzzles and find more treasures to satisfy your need for the full collection. The new skills are always nicely integrated into the story and are always needed at exactly that time. If you have learned a new ability, it is also worth taking a look at the worlds that have already been completed in order to complete the remaining collection tasks there. Like in a small Metroidvania, it's not possible to collect everything in one go. It's nice that the developers let us see statistics for each world, how much of which collector's item is still in the world. So you always have the full overview. 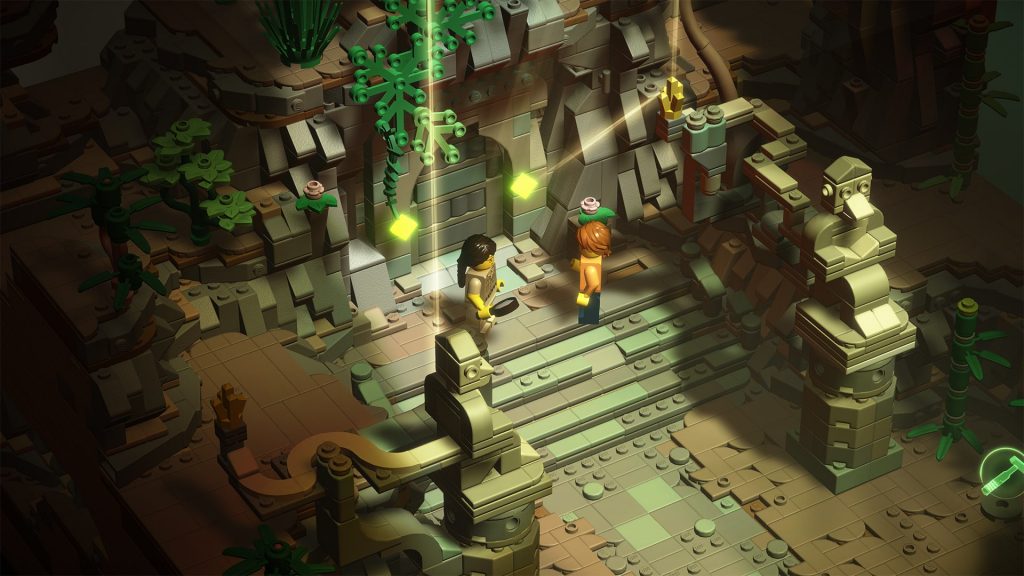 How are the LEGO techniques?

As already mentioned, the visuals of the game are very nice and well done throughout. The worlds, on the other hand, should be a fair bit larger; but they are very lovingly designed. In addition, the diorama in the pause menu also offers another opportunity to find secret passages and thus discover hidden chests.

Unfortunately, as a game itself, LEGO Bricktales falls short with some shortcomings. For example, the camera is often too close, so that the overview in the world is a little lost. In addition, the camera cannot be rotated freely, which means that you occasionally go down a path on the off chance and only realize a few seconds later whether it is a secret passage or a dead end. 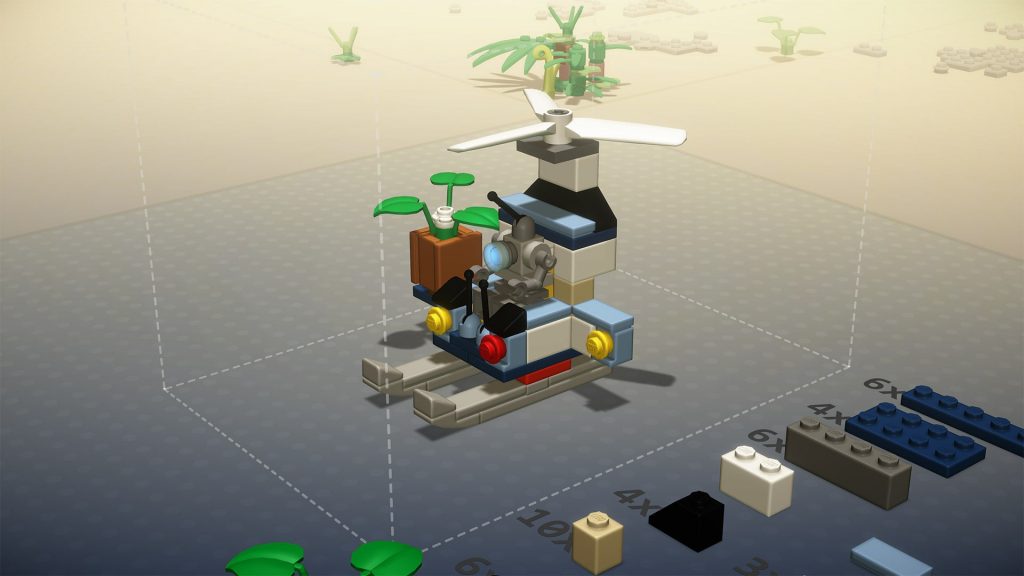 The build editor was the one that pissed me off the most when I tested it. Of course it is in the nature of things that tinkering together virtual bricks is not that easy, but the construction editor is much too cumbersome for my taste. The camera can be moved more freely here, but it is still quite awkward to control, which means that stones are unfortunately placed in the wrong place. Here I would have wished for a much more comfortable and fluid handling. The hotkeys and markers help a little with control and orientation, but the help is a bit too meager for me.

However, it is nice that I can actively shape the world with my buildings, vehicles and bridges. Since you only have the specification of a goal, but not the specification of a specific look, buildings can be designed according to individual wishes. This hits the core idea of LEGO building blocks better than any other game before. 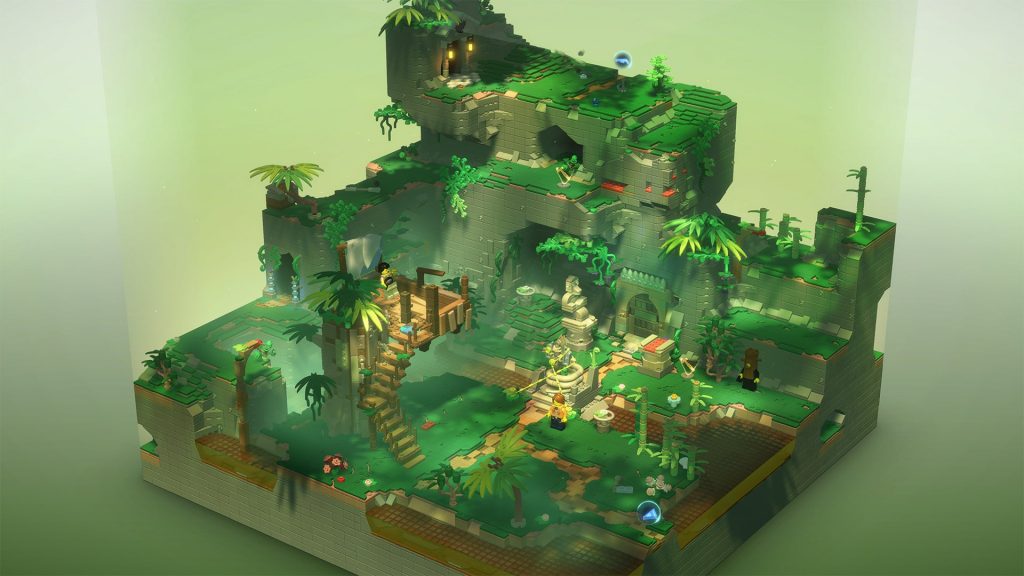 Unfortunately, there is no voice output – all dialogues are in text form. The typically subtle, childlike LEGO humor is also present here and also makes one or two adults smile. There is not much to say about the sound. The music is rather meditative and hardly noticeable, the sound effects are appropriate and neat.

At around seven to nine hours of gameplay, LEGO Bricktales is fairly short and quickly feels like an attempt at play rather than a full-fledged game. At a price of EUR 29.99, this is not a major point of criticism. LEGO Bricktales has been available for the Nintendo Switch, PlayStation 4 and 5, Xbox One, Xbox Series and PC since October 12, 2022.

The developers of ClockStone have delivered a nice little building block adventure with LEGO Bricktales . Even without large licenses and completely non-violent, you will be entertained here for a few hours and even as an adult you can have fun with creative building, which is absolutely the focus of LEGO Bricktales . However, the story and accessibility, as well as the puzzles and anticipated structures, are clearly aimed at a younger audience. The collection tasks are limited and the new skills and Metroidvania approaches fit well into the game.

However, the controls and camera work still deserve a bit of potential for revision and the dialogues deserve a soundtrack. Otherwise, LEGO Bricktales is a great game for kids or adults who want to relive some old childhood feelings for a short time.