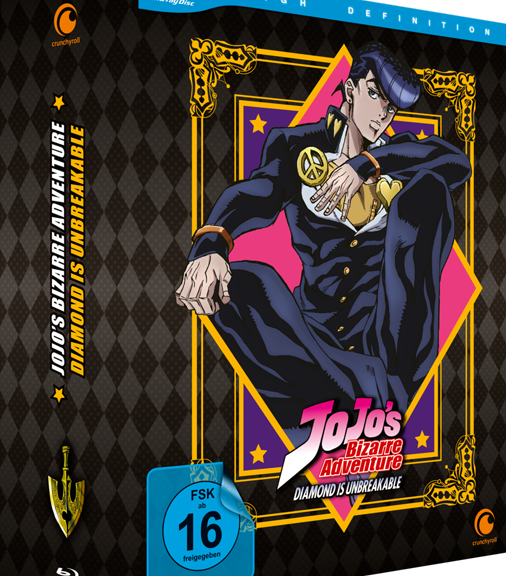 Three months ago, Crunchyroll (formerly KAZÉ Anime) announced the licensing of the 39-episode third season of Jojo's Bizarre Adventure (we reported ). Meanwhile, there are more details about the planned disc release.

The home video release of JoJo's Bizarre Adventure: Diamond is Unbreakable will be in three volumes as an HD Keep Case in O-Card on DVD and Blu-ray. Volume one is expected to be available on September 15, 2022 with a slipcase. In addition to the first 13 episodes in German and Japanese, there is a booklet, stickers, a poster, an art card and the clean opening and ending as extras.

It will continue with Volume 2 on October 20, 2022 before concluding Season 3 with Volume 3 on December 15, 2022. All volumes can now be pre-ordered via Amazon.

Diamond is Unbreakable is the fourth installment of Hirohiko Araki's original manga series of the same name and was created by Studio David Productions and directed by Naokatsu Tsuda. With a total of 39 episodes, the third season ran from April to December 2016 on Japanese television and on Crunchyroll with German subtitles in simulcast.

KAZÉ Anime has already released the first two seasons on DVD and Blu-ray with German and Japanese voice acting. 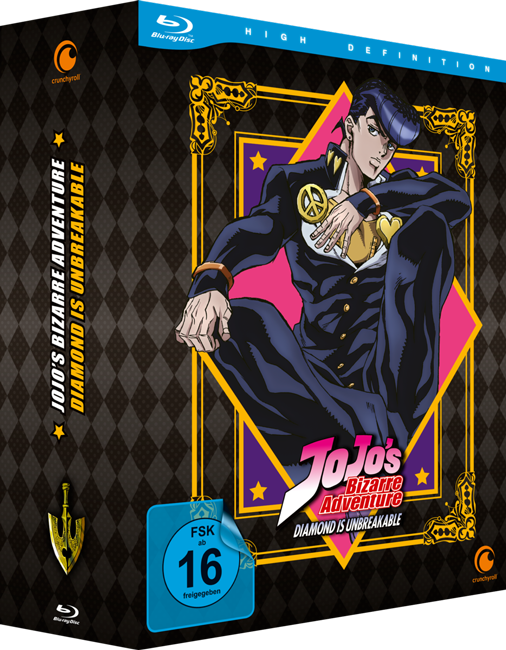 This is what JoJo's Bizarre Adventure is about:

We are in England at the end of the 19th century. Jonathan Joestar nicknamed "Jojo" is the only son of a wealthy family and leads a tranquil life. But this calm is over in one fell swoop when the young orphan Dio Brando arrives at Joestar's house. The ruthless Dio has declared it his goal to make Jonathan's life hell and will stop at nothing to do it. When a mysterious stone mask falls into Dio's hands, disaster begins. With a blood sacrifice, this ancient Aztec mask gives its wearer immeasurable power, but the user loses his humanity. Despite the high price, Dio applies the mask, becoming a seemingly unstoppable monster. Can Jonathan stop Dio before he plunges the world into ruin in his lust for power?