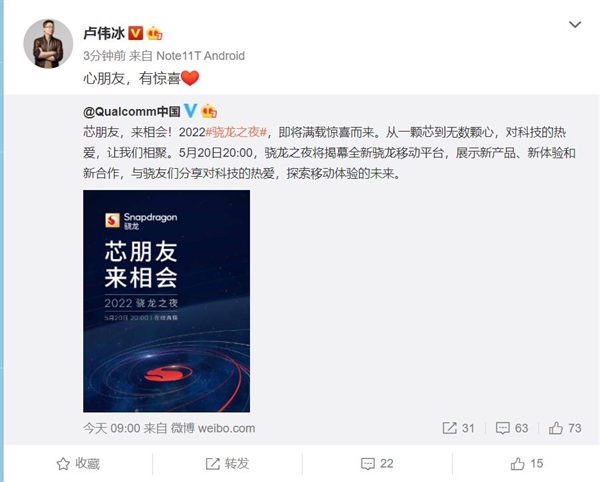 Xiaomi and Qualcomm have been working hand in hand for some time. In general, Xiaomi is usually one of the first brands to make use of the latest from the processor manufacturer and this will apparently also happen with the Snapdragon 8 Gen 1+ .

As confirmed by the CEO of Redmi himself, a new high-end terminal will be announced on May 20 , which will make use of the new Snapdragon 8 Gen 1+, which could be presented that same day as the most powerful smartphone processor. From the market.

We could be before the Redmi K50 Ultra

Although at the moment Xiaomi has not confirmed which device will be in charge of debuting the Snapdragon 8 Gen 1+, everything indicates that it could be a new member of the Redmi K50 Series , specifically the Redmi K50 Ultra .

In addition, this new Redmi K50 Ultra would not only incorporate the Snapdragon 8 Gen 1+, but also other high-end components that would make it the most powerful and advanced Redmi in history , whether at the screen, photography and/or autonomy level. .

This new device would in turn take a new name in the Global market, either becoming a new member of the POCO F4 Series or, more likely, the most advanced model of the Xiaomi 12T Series .