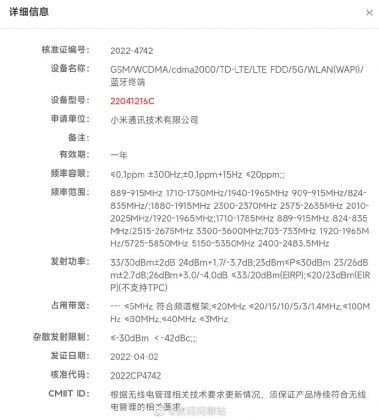 Although the Redmi Note 11 Series has just landed on the Global market, Xiaomi already has its new Redmi Note 12 ready and has also obtained its first certification , which reveals the first details of this new mid-range.

Let us remember that in general, at least in China, Xiaomi usually renews its Redmi Note Series twice a year, so the Redmi Note 12 could debut at the end of this same 2022 , giving way to a new generation.

First details of the Redmi Note 12

As we can read through Gizmochina , the Redmi Note 12 has obtained its first certification, thereby revealing that its model number will be 22041216UC . This opens the doors for us to follow up from here to its launch.

In addition, it is a device equipped with 5G technology. Something normal if we take into account that Xiaomi has decided not to launch more mid-range devices only with 4G, at least in its native country of origin.

Beyond that, everything remains a mystery around this Redmi Note 12. Even so, it is rumored that it will bring very similar characteristics to the Redmi Note 11 Pro+ , equipping a powerful fast charge and a processor probably from the hand of MediaTek .