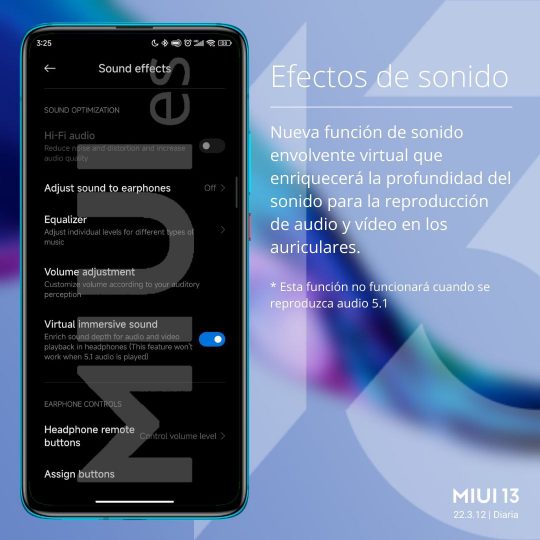 Xiaomi does not stop updating and adding new MIUI features. Although, a few days ago we revealed the latest update to the Control Center , this time the firm has incorporated a new setting that will improve the sound , especially that of the headphones that we have connected.

As they tell us from MIUIes , Xiaomi has incorporated a new option to the MIUI sound effects, which allows us to generate a virtual surround effect , improving the sound of our headphones instantly.

As we can see in the following image, the MIUI sound effects section has expanded its possibilities in the latest beta , specifically in the V13.22.3.12 week, which for now has only been deployed in China.

This new option, called Virtual Surround Sound, will be able to improve the sound of our headphones instantly, enriching its depth when playing audio or video .

Thanks to this new option we will be able to emulate a 5.1 audio effect , that is, to virtually place sounds in space in order to recreate a scene. One more small adjustment, which ultimately expands the possibilities of MIUI once again.