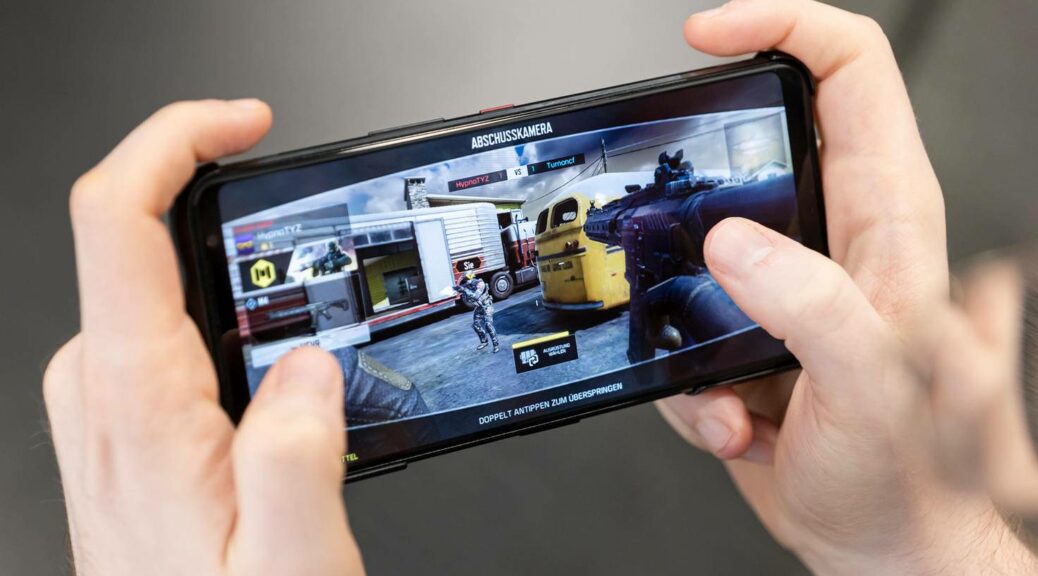 There is all sorts of technology in a smartphone – from the battery to the display to the processor. Today we're targeting cell phone sensors: We'll tell you which sensors are in cell phones and what they do.

Your cell phone can measure the air pressure. This works using a tiny, thin silicon membrane with embedded stretch marks. However, this sensor is not used to predict the weather. Rather, the barometer complements other sensors, such as the GPS receiver, by providing altitude information. This not only makes navigation more accurate, but also information such as calories burned while hiking, since the smartphone can take ascent and descent into account.

The acceleration sensor, together with other mobile phone sensors, determines the orientation of the device. Image:

The acceleration sensor is one of the better-known mobile phone sensors. As the name suggests, the sensor detects acceleration in three directions: sideways, up/down, forwards/backwards. So he has the task of recognizing a change in the situation. If the orientation of the device changes, the direction from which gravity acts on the smartphone also changes. Together with the rotation sensor (gyroscope), the acceleration sensor enables the screen to be rotated automatically.

It also helps to improve accuracy when navigating, for example when driving through a tunnel when the phone has no GPS signal for a short time. It also forms the basis for the pedometer function. The accelerometer is good at registering movement, but doesn't know the exact position of your smartphone.

"Please smile!" What you probably still had a digital camera with you ten years ago, you can now do with a tap on the smartphone display. Thanks to the photo or image sensors. These are chips with a light-sensitive surface that convert the light captured by the camera lens into pixels. The image quality depends crucially on the sensor size and the relationship between resolution and sensor size. To put it simply, you can remember: the larger the sensor, the more light can be captured. This has a positive effect on the image quality.

Today, most Android phones have fingerprint sensors integrated into the display. Image:

Fingerprints are unique. This is why they are also used by smartphones for security-related applications – for unlocking the display and authorizing purchases, for example. Three different types of fingerprint sensors are used in mobile phones: optical, capacitive or ultrasonic sensors.

Optical sensors work in a similar way to a camera and can be tricked very easily. Capacitive fingerprint sensors are slightly more accurate, comparing a change in electrical charge as you charge your finger. The charge only changes in the area of the finger grooves. However, fingerprint sensors work most precisely with ultrasound. These use sound waves to detect the ridges in your finger. All of these sensors then compare the recorded data with the stored fingerprint and only release the display, payment or similar if they match.

By the way: Fingerprint sensors that are integrated into the smartphone display use optical or ultrasonic methods.

GPS, short for Global Positioning System , is certainly one of the best-known mobile phone sensors. A receiver in the smartphone receives signals from at least four GPS satellites in space and can use them to determine the position on earth and the speed of movement. To put it simply, it works in such a way that the smartphone measures the time it took for the satellite signals to reach the receiver and uses this to calculate the distance to the satellites. In order to be able to determine the position even more precisely, the mobile phone uses additional data from mobile radio transmitters and WLAN access points in the reception area.

The gyroscope or the rotation sensor supports the acceleration sensor in determining the smartphone's orientation. It makes it possible, for example, to control mobile phone games by movement. In addition, it makes spatial positioning via GPS even more precise and supports technologies such as image stabilization when taking photos.

The rotation sensor is a few millimeters small and detects rotations around three axes using the Coriolis force and the so-called tuning fork principle: Changes in vibrations during rotation are recorded and the orientation of the mobile phone in space is determined.

A three-dimensional map of the face is created using an infrared sensor. Image:

If your smartphone does not have a fingerprint sensor, it may use an infrared sensor for face recognition. One of these is used in current iPhones for Apple's Face ID function . This technology uses infrared light to create a three-dimensional map of your face. Numerous small dots are projected onto your face and captured by an infrared camera. Unlike a regular camera, the infrared sensor also works in poor lighting conditions. The recorded data is compared with the stored model of your face and the smartphone display is released if there is a match.

With the help of the magnetometer, your mobile phone can find out where magnetic north is. It is therefore a digital compass that uses the earth's magnetic field to determine the cardinal direction. Together with the acceleration sensor and the rotation sensor, the position of the smartphone in space can be determined. This is useful, for example, when navigating on foot: Thanks to the magnetometer, the cell phone can not only show you the route on the map, but also the direction in which you are currently looking.

Sure, the microphone in the cell phone is needed to be able to make phone calls. However, there are other possible applications. Other apps use this mobile phone sensor to measure ambient noise, for example for use as a baby monitor or for room monitoring. Voice recorder software or voice recognition services such as Google Assistant or Siri also need access to the microphone.

The proximity sensor disables the touchscreen when on the phone. Image: © Samsung 2022

The proximity sensor in the cell phone detects when something approaches the smartphone display. To do this, it emits invisible infrared rays and registers their reflection. For example, if your ear approaches the display to answer a call, the proximity sensor ensures that the display is deactivated from a certain distance. This prevents you from accidentally touching the touchscreen while making a call. If you take the smartphone away from your ear again, the screen is activated again.

The smartphone display does not have to shine as brightly in the dark as it does in direct sunlight. Auto screen brightness is a handy feature that comes thanks to the ambient light sensor. The sensor usually contains a light-sensitive element that detects the brightness of the environment, as well as a color filter that also registers the color temperature – i.e. the red, green and blue components of the ambient light. This data is used to automatically adjust the brightness, contrast and color saturation of the screen. Pretty handy, right?