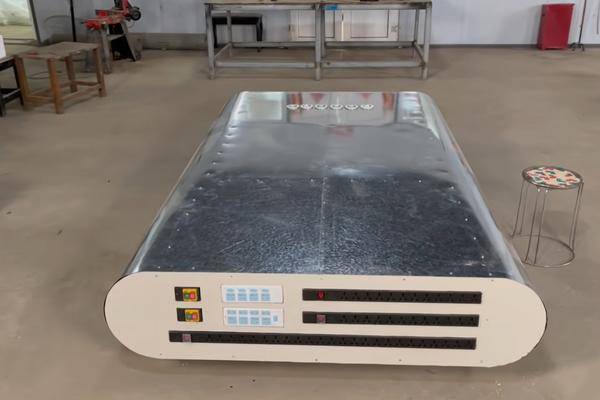 The YouTuber Handy Geng has taken the capacity of power banks to a new level in his current do-it-yourself project. The hobbyist screwed together a power bank that offers an incredible capacity of 27 million milliampere hours. And in a way, it's even portable.

Power bank based on an electric vehicle battery

Geng uses a battery from an electric vehicle as the basis for his power bank. In a video, he packs these in a self-made housing made of wood and sheet metal. The hobbyist rewired the vehicle battery connections and distributed them to a total of 60 socket locations. In the end, the final device actually looks like a power bank, except that it is about the size of a dining table.

Geng has also made sure that his power bank can be transported with relative ease. It has rollers attached under the housing. He can also take his mega power bank with him when he goes fishing, as he demonstrates in his video.

According to Geng, the capacity of the power bank should be around 27,000,000 mAh. Actually, with such a dimension, one should rather speak of 27,000 Ah, but Geng prefers the smaller unit of measurement because the capacity can be better compared with typical power banks.

The mega power bank can be used for pretty much any electrical household appliance, as Geng demonstrates. Its power bank can charge more than 5,000 smartphones with a battery capacity of around 3,000 mAh. Alternatively, it can also charge small electric scooters. When fishing, Geng uses the power bank to run a TV, washing machine and electric cooking pot. So a perfect power bank for camping, if only it wasn't so bulky.

Handy Geng is a DIY YouTuber known for his absurd projects. Inventions such as a wheelchair lawn mower or a safe refrigerator have already been seen on his channel. When building his devices, the focus is basically on having fun and entertaining the viewers; there is often no real reason for his inventions to exist. This also applies to its oversized 27 million mAh power bank.