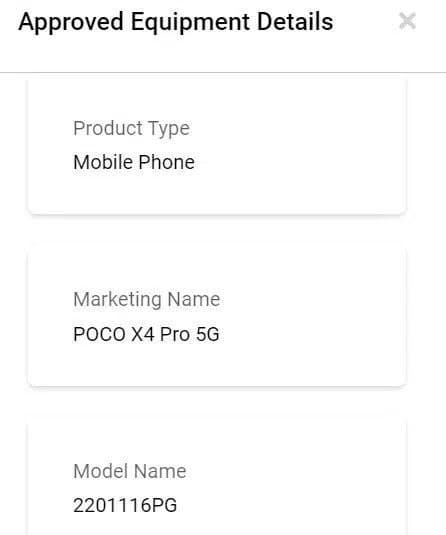 The POCO X4 Pro 5G has shown signs of life again, obtaining a new certification and thus revealing not only its imminent launch, but also its model number, which is very similar to a terminal that we already know .

Without going any further, the POCO X4 Pro 5G has been certified under the model number 2201117PG , thereby revealing features very similar to those of the Redmi Note 11 Pro 5G , not only in terms of processor, but also in terms of battery and photographic section.

This will be the new POCO X4 Pro 5G

According to the latest Equal Leaks post , the POCO X4 Pro 5G will feature a Snapdragon 695 5G inside. This makes us think that this time power will be sacrificed in favor of incorporating a better camera, as well as a better screen , as we will see below.

In addition, this expected smartphone will apparently have a 6.67-inch AMOLED screen , probably capable of reaching 120Hz. In turn, it will add a 5,000mAh battery with 67W fast charge and a 108MP main camera .

Beyond that, everything remains a mystery, although the POCO X4 Pro 5G will probably debut with MIUI 13 pre-installed in the middle of this month of February , both in India and in the Global market, that is, in Europe and Latin America.