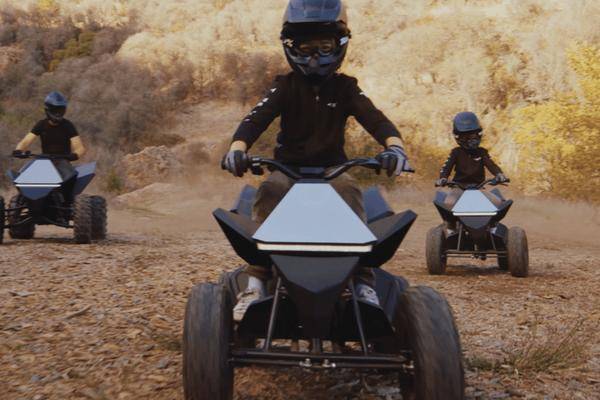 It will be a long time before Tesla's Cybertruck finally appears. But parents can at least make their children happy with the Tesla Cyberquad. The electric All Terrain Vehicle (ATV) is electrically powered and can travel up to 16 km / h.

The angular design of the Cyberquad is directly reminiscent of Tesla's much-anticipated Cybertruck. In fact, the ATV is a mini version of the electric quad that has already been seen on the back of a cybertruck. Although the Cyberquad is actually intended for children, the tweet from Tesla's chief designer Franz von Holzhausen proves that the ATV is also from
(light) adults can be driven.

Tesla currently only sells the Cyberquad in the USA and it is already sold out there, reports WinFuture . A release in Europe is currently not planned. American parents who want to make their children (and themselves) happy with the Cyberquad, however, have to dig a little deeper into their pockets. The ATV costs a whopping 1,900 US dollars.

But the quad also has a lot to offer. The range of the vehicle is up to 20 kilometers, depending on the terrain. A full charge of the battery takes about 5 hours. The Cyberquad offers a total of three speed levels. On the fastest, it reaches up to 16 km / h, the other two are 8 km / h each forwards and backwards. The Cyberquad has a sturdy steel frame and weighs around 55 kilograms. The maximum load capacity of the ATV is 68 kilograms.

A foretaste of cybertruck and large quad bikes

The little Cyberquad is certainly a nice idea for Tesla fans with children. It will be a while before the adult version of the ATV and the futuristic Cybertruck appear. The two electric vehicles were originally scheduled to hit the market at the end of 2021. Persistent bottlenecks in the availability of electronic parts, however, cause delays in the release.

If you want to get the design of the cybertruck home at least once, you can alternatively try to order the official Cyberwhistle from Tesla in the USA.