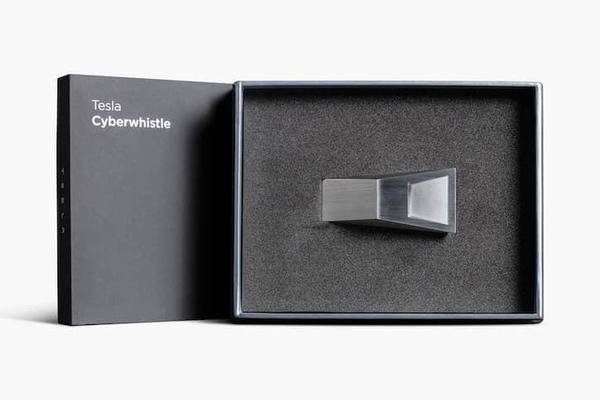 The automobile company Tesla sells a metal pipe for 50 US dollars in the United States. The so-called Cyberwhistle with its angular design is similar to Tesla's Cybertruck. The action is not meant to be taken seriously, however, but rather to be understood as a swipe at Apple's overpriced polishing cloth.

On Tuesday, Tesla boss Elon Musk praised the "innovative" new product on Twitter. "Blow the whistle on Tesla!", He wrote there, which translates as "Verpfeif Tesla!" means. Underneath, Musk posted a link to the Tesla shop , where fans could secure the collector's item for $ 50. Immediately below the tweet, Musk made it unmistakably clear that the action was not meant to be taken seriously and that the company wanted to kidnap Apple.

"Don't waste your money on the silly Apple polishing cloth, you better buy our pipe!" Commented Musk under his own tweet. He is alluding to Apple's official polishing cloth, which the Californians presented together with the new MacBook Pro models in October. The polishing cloth from Apple costs 25 euros, is compatible with all Apple products and even has an Apple logo. At this price for a polishing cloth, it is actually difficult not to fire a snippy comment in the direction of Apple. It's just surprising that Elon Musk comes around the corner so late.

Anyone willing to pay 50 dollars for the Cyberwhistle will get a pipe in the angular cybertruck look. As the description in the shop reveals, the pipe is made of medical stainless steel and has a polished surface. There is also an integrated fastening function, which makes the Cyberwhistle even more versatile. And of course it can also generate whistling sounds.

The Cyberwhistle in the Tesla shop is now completely sold out. But if you were quick enough, you could even pay for your order with Apple Pay. Tesla has not yet revealed when exactly the collectibles will reach buyers.