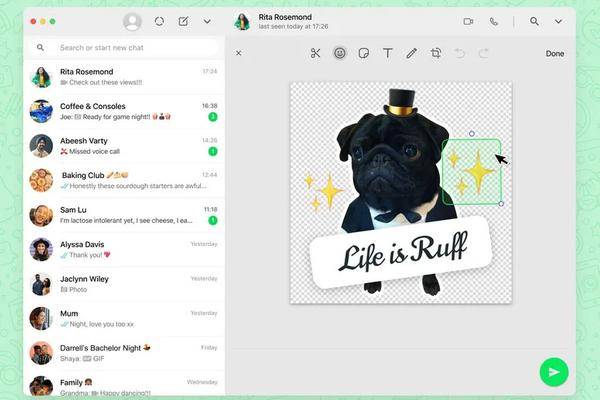 Anyone who likes to communicate with stickers in WhatsApp will be particularly happy about the current update from WhatsApp Web. From now on there is a so-called "sticker maker" with which you can design your own stickers. The editor will also be released for the desktop app next week.

As the website The Verge reports, you can now create your own stickers in the web version of WhatsApp. Stickers are a popular alternative to emojis and GIFs that you can use to express your reaction to something. Until now, you could only get stickers from ready-made packages or you had to create them in third-party apps.

Embellish and text stickers in the editor

If you use WhatsApp in the web version, you can already diligently design your own stickers. To do this, click on the paper clip and then on the sticker symbol. Then a window will open in which you can upload your own picture.

You can then cut out the picture and embellish it with simple tools. For example, you can insert text or emojis, paint it with pens or cut it further. When cutting, however, only square formats are possible. After creating your sticker, it will be saved in your collection and you can use it again and again.

The creation of your own stickers in WhatsApp is actually not new. Even before the editor for the web version, there were numerous third-party apps with which you could create your own stickers and then import them into WhatsApp. The sticker maker in WhatsApp Web is likely to be far more convenient, as users can use a mouse for design that is much more precise than touch control on a small screen.