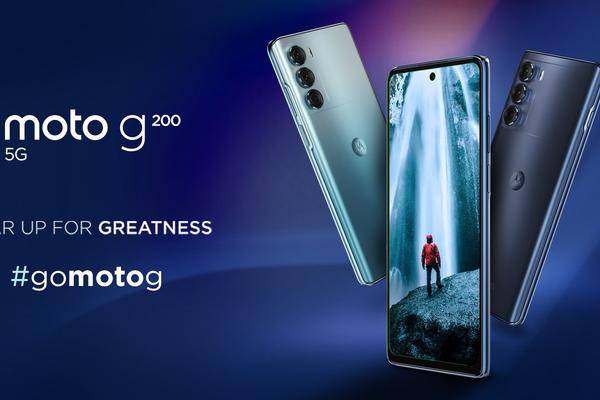 Motorola has introduced the new Moto G200 5G. The smartphone has strong high-end hardware, but is comparatively cheap. The highlights of the phone include a Snapdragon 888+, a 108 megapixel main camera and a 144 Hz display. The Moto G200 5G can therefore be called a real "flagship killer".

In terms of computing power, the Motorola G200 5G doesn't have to hide from current flagships. The Snapdragon 888+, currently Qualcomm's fastest Snapdragon processor, is supported by 8 GB LPDDR5 memory and fast UFS 3.1 memory, optionally in 128 or 256 GB. Motorola wants just 450 euros for this, reports GSMArena . And the other specs of the Moto G200 5G are also impressive. There are only minor compromises in terms of the display and housing.

The display of the Moto G200 5G is 6.8 inches and offers a resolution of 2,460 x 1,080 pixels. In addition, a fast frame rate of up to 144 Hertz is offered and HDR10 is also supported. The only thing that could bother smartphone enthusiasts on the Moto smartphone is the built-in display technology. Motorola relies on an LC display instead of an OLED display.

The camera module of the Moto G200 5G also makes a good impression at first glance. A 108 megapixel sensor is used as the main camera. This should also make videos with 8K resolution possible. Also on board: a 13-megapixel ultra-wide-angle sensor and a depth sensor with an as yet unknown resolution. The selfie camera has a resolution of 16 megapixels and is housed in a hole in the display.

The battery built into the Moto G200 5G has a capacity of 5,000 mAh, which should ensure long runtimes. In addition, the battery can be quickly recharged with 33 watts. The frame and the back of the smartphone are made of plastic. The Moto G200 5G is also certified to IP52 and is therefore protected against splash water.

The Motorola G200 5G is to appear in Europe in the next few weeks and costs 450 euros in the cheapest variant. The smartphone runs with Android 11 from the factory, but Motorola has already promised an update to Android 12.