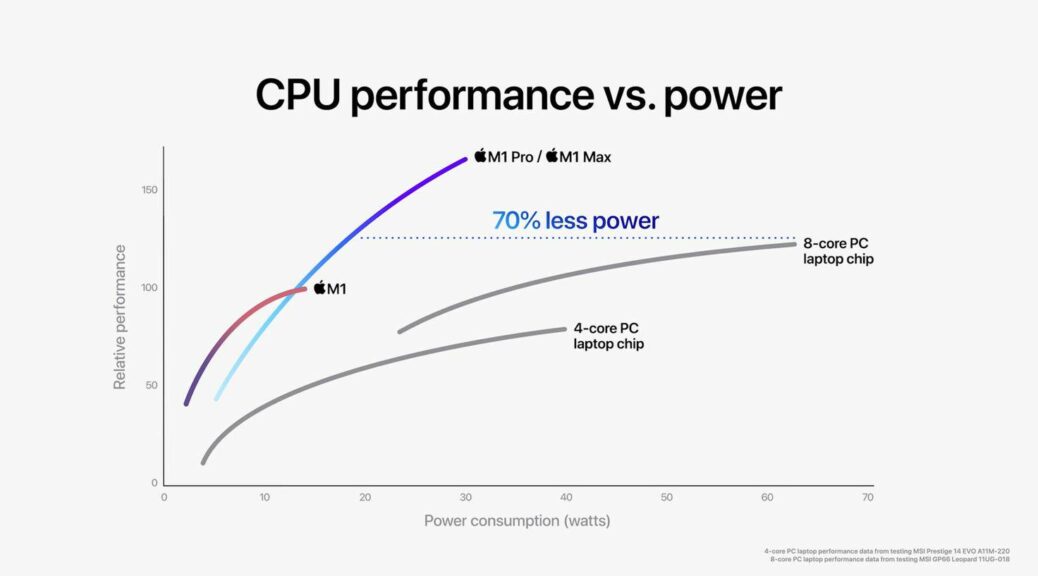 Apple has announced two new chipsets for the new MacBook Pro: the M1 Pro and the M1 Max. The chips are quite similar in structure, but differ in their performance. Here you can find out who is suitable for which Apple chipset.

When Apple presented the new MacBook Pro at its October keynote, two chips in particular were the real stars: the Apple M1 Pro and the Apple M1 Max. These are further developments of the M1 chip, which was first introduced in the MacBook and Mac mini was installed.

If you take a look at the technical data of both chips, you will notice numerous similarities:

M1 Pro vs. M1 Max: These are the differences

Despite the significantly higher graphics performance, the energy consumption is on a low level. Image: © Apple 2021

The energy requirement is up to 70 percent lower than that of similar chips in PCs or notebooks. The main memory is a maximum of 32 GB RAM with a memory bandwidth of up to 200 GB / s – more than sufficient for most applications. The M1 Max also has a 10-core CPU like the M1 Pro, but offers significantly greater graphics performance with up to 32 cores – and thus up to four times faster graphics performance than the M1. If you need 64 GB of RAM, you have to use the M1 Max.

One thing is clear: both chips are powerful enough for complex video editing. You can render complex timelines in Final Cut Pro X around 13 times faster with the M1 Max than with the M1. Of course, the M1 Pro is also ideally suited for complex work – only with the M1 Max it is still a tad faster. And the maximum of 32 GB of RAM for the M1 Pro should be more than sufficient for the vast majority of users. Only for really professional tasks, such as complex 3D modeling or time-consuming scientific calculations, 64 GB can make sense – and therefore the choice of the M1 Max.

Both the M1 Pro and the M1 Max are oversized for normal surfing, some image editing and other simpler tasks – the M1 continues to do a very good job here. Those who place the highest demands on their MacBook choose a device with an M1 Pro. Only absolute professional users who carry out highly complex tasks on their notebook need the M1 Max.