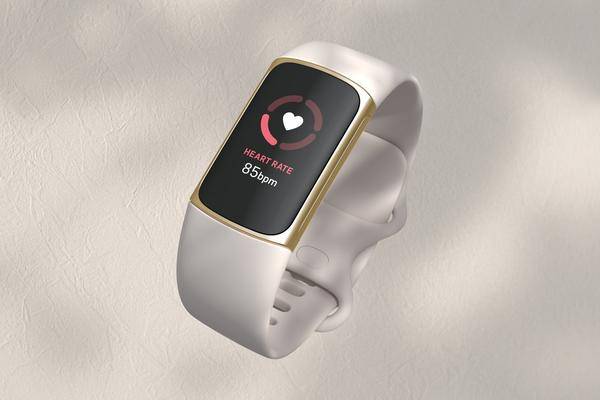 The fitness tracker manufacturer Fitbit presented a new wearable for the first time after the takeover by Google: the Fitbit Charge 5. The fitness tracker has a lot of sensors and can, among other things, create an EKG, measure the stress level of the user and even Detect atrial fibrillation.

The Fitbit Charge 5 is the manufacturer's first fitness bracelet that has an EKG function, according to the Google Blog . So users can get very detailed information about their heart health. If the wearer presses their finger on the metallic frame of the bracelet for 30 seconds, the device should even be able to detect atrial fibrillation, a cardiac arrhythmia. However, this function should not be available at the launch and will only be activated later.

The health data should also be able to be downloaded as a report and can then, for example, provide important information on the health of the wearer when talking to a doctor.

The EDA sensor, which measures the electrodermal activity of the skin (formerly called galvanic skin reaction), is also brand new. From this data, the Fitbit Charge 5 can calculate the stress level of the wearer. Conveniently, the bracelet also offers more than 300 meditation exercises with which the stress level can be reduced.

In addition to the new functions, the Fitbit Charge 5 can of course also measure classic fitness values. These include oxygen saturation (SpO2), heart rate, breathing rate, skin temperature and, as usual, the bracelet also analyzes the wearer's sleep.

On the technical side, Fitbit has given its latest bracelet a few upgrades: Instead of the gray-scale OLED display from its predecessor, the Fitbit Charge 5 now has a 1.04-inch AMOLED color display that is protected with Gorilla Glass 3.

According to Fitbit, the battery life should be around seven days. However, the runtime is shortened when the always-on display is switched on, multiple data measurements and GPS tracking is activated. It takes around two hours to fully charge the Fitbit Charge 5.

Since the bracelet is water-repellent up to a depth of 50 meters, the Fitbit Charge 5 is also suitable for swimmers and divers.

The purchase price includes a premium membership with Fitbit for six months. This includes additional functions such as a daily form index, which determines whether the user is fit for training or should recover, a stress management index and the normal ranges of fitness and health values for the last 30 days. Audio coaching, recommended activities, mindfulness exercises and virtual competitions are also included here.