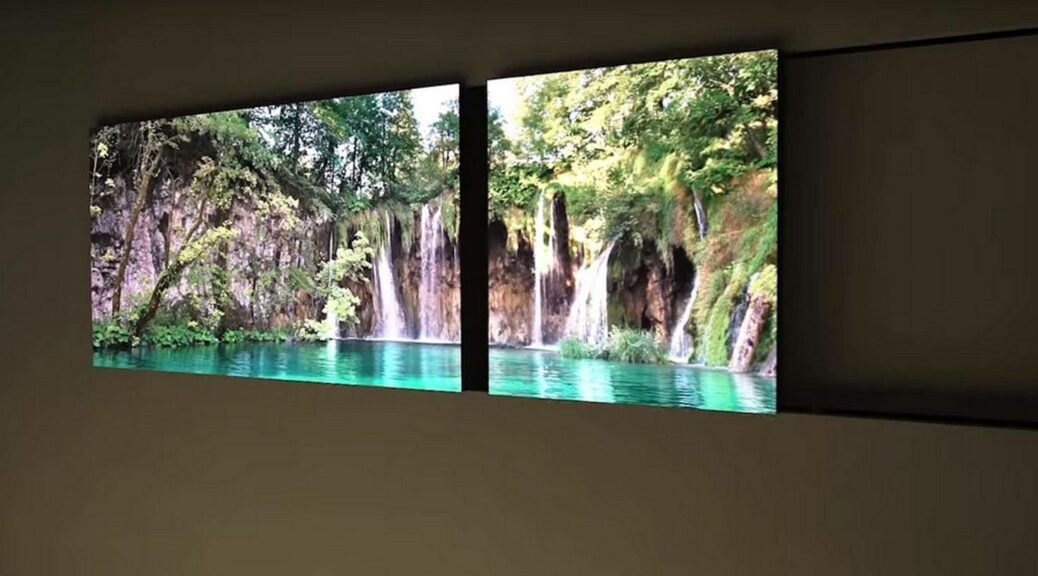 Micro-LED televisions could replace other technologies such as LCD or OLED in a few years. We explain the advantages of the new technology and which hurdles still have to be overcome.

For years, OLED TVs have been considered to be pretty much the coolest thing in the living room. But slowly but surely, Samsung is preparing to overtake OLED technology with so-called micro-LED screens. But what is actually behind micro-LED, why should this technology be even better and when will you be able to buy the corresponding TVs?

What is micro LED? The technology explains

In fact, micro-LED technology has been haunted the rumor mill for several years. So far, however, no manufacturer has managed to get these really ready for series production and to set up mass production of the corresponding panels. In short, the television with a micro-LED display should function similarly to a gigantic light panel made up of millions of tiny LED lamps. Every pixel, even every subpixel, is its own little LED lamp that lights up on its own.

Micro-LED technology thus shows great parallels to OLED technology. Even with an OLED panel, each subpixel is a small light-emitting diode that can light up independently. The biggest difference is actually the material used. Because while the light-emitting diodes in the OLED consist of an organic carbon compound, they are completely synthetic in the micro-LED panel.

Micro LED TVs are not to be confused with current LED TVs, because despite the similarity of names, they are two completely different technologies. Current LED TVs are nothing more than the well-known LCD TVs. Instead of fluorescent tubes, however, they use LED lamps for the background lighting. And it is precisely this background lighting that is the crux of the matter: While the micro LEDs light up by themselves, the liquid crystals on the LC display have to be illuminated from behind.

Would you like to enjoy the very highest quality picture quality on your television? Then a calibration by a professional could be the right thing for you.

SATURN now offers the TV calibration service – directly in the store or at your home. A professional will calibrate your TV the way filmmakers intended. With the help of the Calman software, highly regarded by the film and television industry, and a professional colorimeter.

The advantages of micro-LED compared to LCD technology

The advantages that a micro LED TV has over a classic LCD TV are largely the same as those that an OLED TV can boast and have already been explained in an earlier article . In short: By eliminating the backlight, micro-LED TVs can display a significantly higher contrast ratio than LCD devices, and the displays can generally be made slimmer and even flexible. Since the LEDs light up by themselves, richer colors can also be produced. In addition, the panels are extremely stable in terms of viewing angles compared to liquid crystal displays.

The advantages of micro-LED compared to OLED technology

But as already mentioned: The advantages mentioned above also apply to OLED TVs. However, there is one point where micro-LED televisions even have an advantage over OLED devices: their light-emitting diodes are not organic.

The organic light-emitting diodes of an OLED TV have a limited shelf life due to disintegration processes, which makes it necessary to recalibrate the panels after a few years of use and also generally limits their service life. In addition, due to their chemical structure, they have a limited luminosity.

However, these two disadvantages do not apply to micro-LED displays. Because of their purely synthetic composition, they are not exposed to the same disintegration processes and can develop a higher luminosity. The bottom line is that a micro-LED TV could offer the same advantages as an OLED TV, but without its disadvantages. For this reason, many experts consider micro-LED technology to be THE display and TV technology of the future in the long term.

The television is becoming modular and flexible

The current micro-LED TVs, which Samsung is presenting at various trade fairs and which are already being offered in limited numbers for major customers, are made up of several small LED panels and can even be modularly expanded. This could one day make it possible for users to assemble the television themselves from individual panels or even to enlarge it by adding new panels.

This makes it possible to change the display format as required – for example 16: 9 for TV series and 21: 9 for movies. This is of course still a long way off, but thanks to the micro-LED technology, such scenarios are now conceivable.

The big disadvantage: the technology is quite expensive

Of course there is a sticking point somewhere with every technology and with micro-LED this is currently mainly the complex manufacturing process, which results in very high prices. The manufacturer cannot yet address the mass market with the first devices. In the medium term, however, micro-LED TVs will have to compete with OLED televisions if they really want to establish themselves on the market. This is likely to be the greatest challenge for manufacturers for the time being.

So it is not yet clear whether it will really be possible to transform the potential of micro-LED displays into mass-market products. In any case, the cost factor should not be underestimated. Samsung will take the next step in 2021, because private customers are also expected to be able to buy micro-LED TVs in October. Since these are exclusive products in the six-digit price range, the televisions will not be freely available in stores.

Originally, Samsung wanted to bring two micro-LED televisions onto the market in Germany as early as April: a 99 and 110-inch model. The smaller version should cost 130,000 euros, the larger even 150,000 euros. It is not known why the sales start was postponed to October.

Allegedly, two more micro-LED models in sizes 77 inches and 88 inches are also planned. For mass production, which is scheduled to start in 2022, Samsung is currently building a new production line in Ho Chi Minh City in Vietnam.