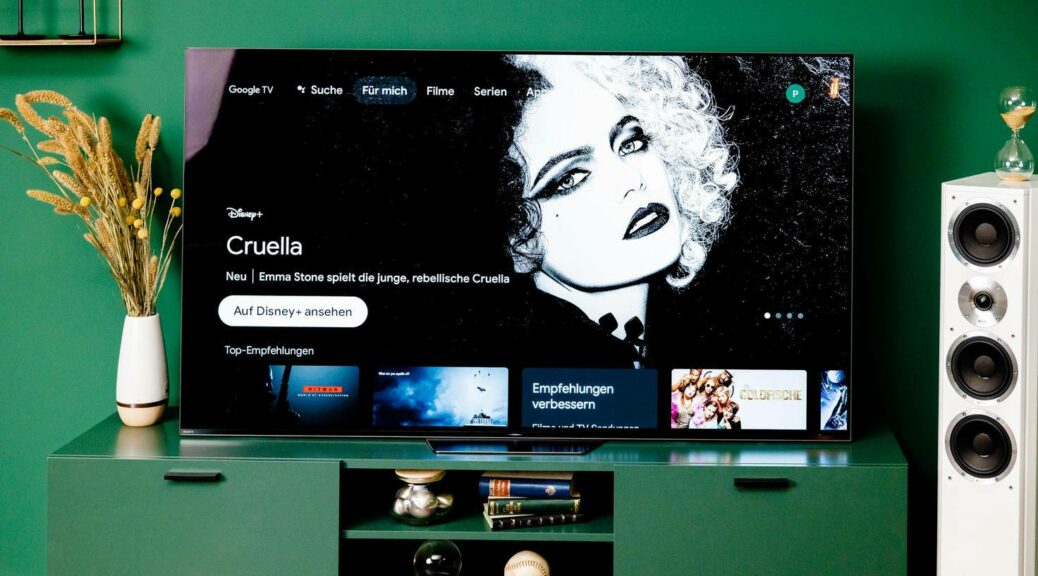 Chromecast with Google TV can do a lot more than just mirror content from your smartphone to your TV. Using five exciting features, we will show you why the small streaming device is a real all-rounder.

1. All films, series and documentaries at a glance

Unlike previous models, the newest member of the Chromecast family has a voice remote control and its own user interface called Google TV. The Android TV operating system, which has been established on numerous smart TVs for years, serves as the basis. However, Google gave it a special look and a new navigation structure.

What is immediately noticeable about the Chromecast user interface with Google TV: The focus is on content such as films, series, documentaries and reports, not apps. In the "For me" area you get the content sorted by genre. To do this, Google searches the installed apps and above all selects the films, series and documentaries that best suit your user behavior. You can pre-sort your items yourself using the "Manage services" button.

In the "Apps" area you can also browse through the various apps such as Netflix, Amazon Prime Video, Disney +, Apple TV +, Joyn and in numerous broadcaster media libraries. Here you will also find access to the Google Play Store, which contains thousands of other apps. The "media library" area is your own media library with films and series that you have bought digitally from one of the streaming providers.

A central control element of the Chromecast with Google TV is the voice control. On board is the Google Assistant, which, as a voice assistant, mainly helps with the search for content. To do this, simply hold down the Google Assistant button on the remote control and speak the title of the film or series you are looking for into the built-in microphone.

The remote control also acts as a microphone for voice control. Image:

Alternatively, you can search for specific actors or channels or ask the assistant to start a specific app.

3. Stream from smartphone, tablet and computer

Just like with previous Chromecast models, you can use Chromecast with Google TV to stream content from your smartphone, tablet or computer to the TV using the Google Cast protocol. The prerequisite for this is that the respective device is in the same WLAN as the Chromecast.

The cast function is supported by a large number of apps for Android and iOS. For example, it is possible to use services such as Zattoo, DAZN, Waipu TV, Pro 7, ARD or ZDF via the Chromecast, even if these are not available as native apps on the device. The Google Photos app streams your photos and videos directly to the TV, and with the VLC player you can play locally stored videos wirelessly on the TV via Chromecast. You can find a comprehensive overview of the Android and iOS apps that are compatible with Chromecast here.

Streaming to the TV via Chromecast also works from the computer. If you use the Ch r ome browser for Windows or MacOS, you can select individual browser window and transmitted via "Settings> Stream" to a Chromecast in wireless range. The combination of thousands of natively available apps and the ability to stream content from other devices makes Chromecast with Google TV a real content machine.

The cloud gaming platform Stadia also turns Chromecast with Google TV into a game console on which you can play blockbuster games like "Cyberpunk 2077", "Red Dead Redemption" and "Humankind" – without any installation.

Chromecast with Google TV turns into a game console thanks to Stadia. Image:

To do this, simply download the Stadia app from the Google Play Store and log into the service on another device at stadia.google.com with your Google account. You can find the various games for sale in the Stadia Store. Alternatively, you can subscribe to the Stadia Pro service or use the free trial period to get access to a selection of games.

Then you couple a compatible controller or mouse and keyboard via Bluetooth with the Chromecast and start playing. In addition to the Stadia Controller, the gamepads for Xbox One and PlayStation 4 can also be used. You can find an overview of all compatible controllers and input devices here.

You can even control smart home devices with your voice using the Chromecast Google Assistant. The prerequisite for this is that you link the devices with the Google Home app on your smartphone or tablet.

After you have linked your smart home devices, you can use the remote control to instruct the Google Assistant to turn on the lights or regulate the temperature of the heating – depending on which smart home devices you use in your household. An overview of all compatible brands and services and features you'll find at this point .