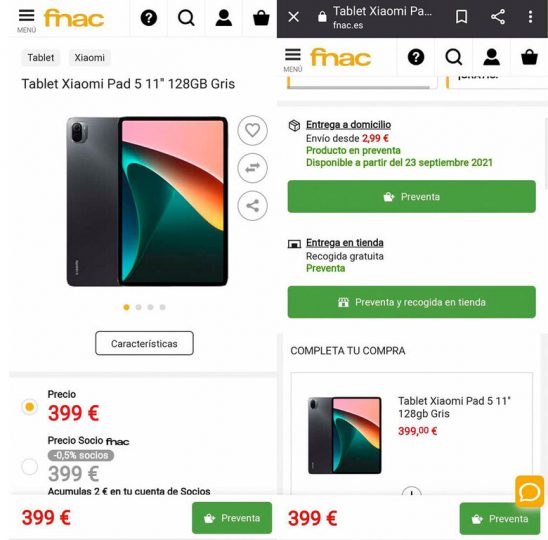 Just a few days before its official presentation takes place, the price and the launch date for sale of the Xiaomi Pad 5 in Spain have been filtered again , also confirming which will be the variant that we will see outside of China .

In itself, it has been the well-known company FNAC who by "mistake" has published the Xiaomi Pad 5 as a pre-sale, letting us see its launch price and also the exact date on which it will begin to be officially marketed in Spain .

Price and release date of the Xiaomi Pad 5 Global

As we can see under these lines, the Xiaomi Pad 5 will go on sale on September 23 . It will also do so in a single storage variant, specifically the 6GB of RAM and 128GB of internal storage.

In addition, the Xiaomi Pad 5 that will be marketed globally will be equipped with a Snapdragon 860 , 11-inch 120Hz IPS LCD screen and an 8,720mAh battery with fast charging. In addition, it will also have a 13MP main camera and an 8MP front camera.

Its price will be 399 euros and it will be available in two color variants: silver and space gray. It will also come without built-in accessories so we will have to buy its keyboard, case and stylus separately.

Similarly, it will not be until next September 15 when we officially know all these details. An event in which we also discover the new Xiaomi 11T Series and probably the odd surprise.