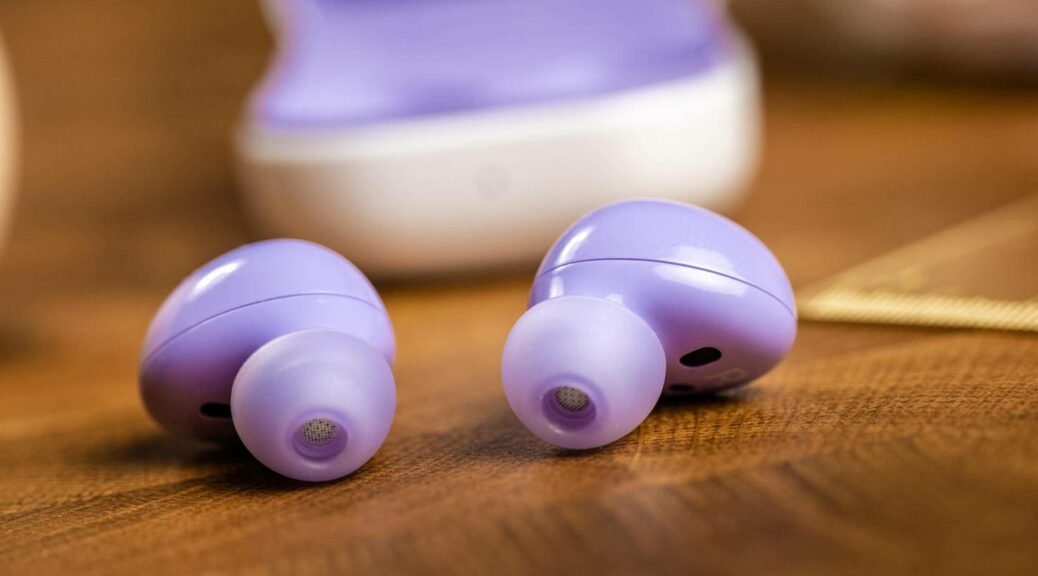 The new Samsung Galaxy Buds 2 turned out to be very well-equipped in-ear headphones with many strengths and only a few weaknesses. Still, there is a catch – and it's homemade.

The speed at which Samsung is introducing new models of its Galaxy Buds wireless in-ear headphones is nothing short of dizzying. In 2019, the manufacturer brought the original Buds onto the market, followed by the Galaxy Buds + in 2020 and the Galaxy Buds Live in the same year. After the release of the Galaxy Buds Pro in spring 2021, the Galaxy Buds 2 are now on the shelves of retailers. What distinguishes the new in-ears, how do they differ from their predecessors?

In terms of design and shape, the Galaxy Buds 2 are based very much on the Galaxy Buds Pro, but are noticeably smaller and lighter. This ensures a chic look and a comfortable fit in the ear. Samsung supplies three different pairs of ear tips for different ear sizes, so most people shouldn't have any problems wearing the Buds 2.

The earphones are small and disappear almost completely in the ear when worn. Image:

The handy case is well made and offers a chic color accent on the inside to match the color of the headphones. As is common with wireless in-ear headphones, the case also serves as a charging cradle for the earphones. According to Samsung, the built-in battery has enough energy to power the Galaxy Buds 2 for up to 29 hours (20 hours with noise canceling) at medium volume. The case itself is charged either via USB-C cable or wirelessly via the Qi standard. I didn't have to charge the case once during the one-week test period with a daily usage of about two hours.

The case can be charged wirelessly. Image:

The Galaxy Buds 2 are only partially waterproof. Samsung specifies protection class IPX2, which means that the headphones can repel splashes of water and sweat. But the Buds 2 are not really waterproof. In the rain or really sweaty sports, you should not wear the in-ears and use designated sports headphones. The headphones definitely have no place in the water.

The Galaxy Buds 2 offer quite an impressive sound for their size and the price range in which they move. As with almost all in-ear headphones, a few compromises have to be made, especially in the low frequency range, but these are less pronounced than with many competing products such as the Pixel Buds 2 . The sound is also amazingly clear and transparent, making the Galaxy Buds 2 suitable for all types of music.

The sound is comparable to that of the Galaxyl Buds + , which came on the market at the beginning of 2020 for just under 170 euros. With the Buds 2, Samsung has refined the sound image a little, but not fundamentally changed it. In terms of sound, the new in-ears are still among the best in their class.

Compared to the Buds +, the active noise canceling of the Buds 2 is new. If you wish, you can hide the ambient noise and concentrate fully on the music. This is of course particularly interesting in buses and trains – and wherever annoying noises become a disruptive factor. The noise cancellation works well, but it's not the strongest on the market. For the price of 150 euros, however, what is offered is good.

As an alternative to noise canceling, there is also a transparency mode. It amplifies the ambient noise by using the built-in microphones in the earphones to specifically capture and amplify external sounds. So it is no problem to talk to other people despite the Galaxy Buds 2 in the ear.

Switching between the individual modes works either by tapping and pressing the earphones or using the Samsung Wear app. Basically, the operation of the earphones via touch surfaces on the outside also works well. A single tap pauses playback, another tap continues, and with a double or triple tap you jump back and forth between individual songs. However, it is a problem that the earbuds are so small. Almost always when you touch one of the earphones to adjust the position in the ear, you also trigger a touch function. This is quite annoying and a major criticism of the Galaxy Buds 2.

Various settings can be made in the Galaxy Wear app. Image: © Samsung / Screenshot: 2021

The Galaxy Wear app on the smartphone offers other setting options such as an equalizer and the selection of different sound profiles. You can also carry out an adaptation test of the headphones for your own ear canal and, if desired, activate the Bixby voice control. The Wear app is currently only available for Android in this form. You can also use the Galaxy Buds 2 with an iPhone, but you have to forego many functions and are completely dependent on touch controls.

Telephoning is not a problem

In addition to listening to music, making calls is another core function of the Galaxy Buds 2. The headphones are not weak here. In the test, the quality of the conversation was always good for the conversation partner – whether indoors or outdoors. Three microphones per earphone ensure that you can be heard well even in noisy environments.

The Samsung Galaxy Buds 2 were able to convince in almost all respects in the test. For an MSRP of 149 euros, there is currently hardly a better overall package on the market. The Buds 2 convince in terms of sound and battery life, are ideal for making calls and even offer features such as noise canceling and the transparency mode. Only if you are looking for in-ear headphones specifically for training should you look elsewhere – for example for the Beats Powerbeats Pro or the JBL Endurance Peak 2.

The bottom line is that the Galaxy Buds 2 would be the perfect recommendation for Android users who want to stay below the 150 euro mark – at least in theory.

Competition for the Galaxy Buds 2 comes mainly from Samsung itself image.:

In practice, the Buds 2 face extremely strong competition, which ironically comes from in-house. The Galaxy Buds Pro , presented in spring 2021, do even better than the Buds 2 in terms of sound, features and noise canceling and currently hardly cost more at many retailers . If you can do without active noise canceling, the Galaxy Buds + are also an alternative, which can often be found on the counter for well under 100 euros.

Samsung seems to cannibalize itself a little with its extremely fast product cycles. At full price, the Buds 2 can hardly stand up to the competition from their own company. However, that should change quickly, even if the Galaxy Buds 2 drop in price.