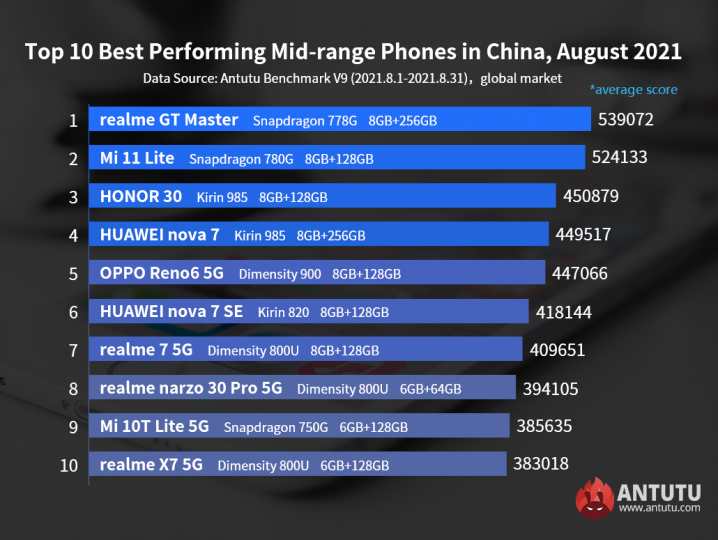 Another month AnTuTu has published its characteristic ranking with the most powerful mid-range smartphones of the moment . Although Xiaomi had been dominating this ranking for some time, this time it has been surpassed by one of the latest devices launched by Realme.

As we show below, the Realme GT Master has become the most powerful mid-range terminal of the moment. For this, it uses a Snapdragon 778G, 8GB of RAM and 256GB of internal storage, achieving a total of 530,072 points .

After this we find the Xiaomi Mi 11 Lite , which after descending one position is placed in the number two position with 524,133 points thanks to its Snapdragon 780G, its 8GB of RAM and its internal storage of 128GB.

In third place, closing the podium, we find the Honor 30 which equips a Kirin 985 processor, 8GB of RAM and 256GB of internal storage. As a result, it obtains a total of 450,879 points , quite far from the Xiaomi and Realme terminals.

Beyond this, the new ranking of mid-range smartphones offered by AnTuTu places the Huawei Nova 7 in fourth position and the Oppo Reno 6 5G and Huawei nova 7 SE in fifth and sixth positions respectively.