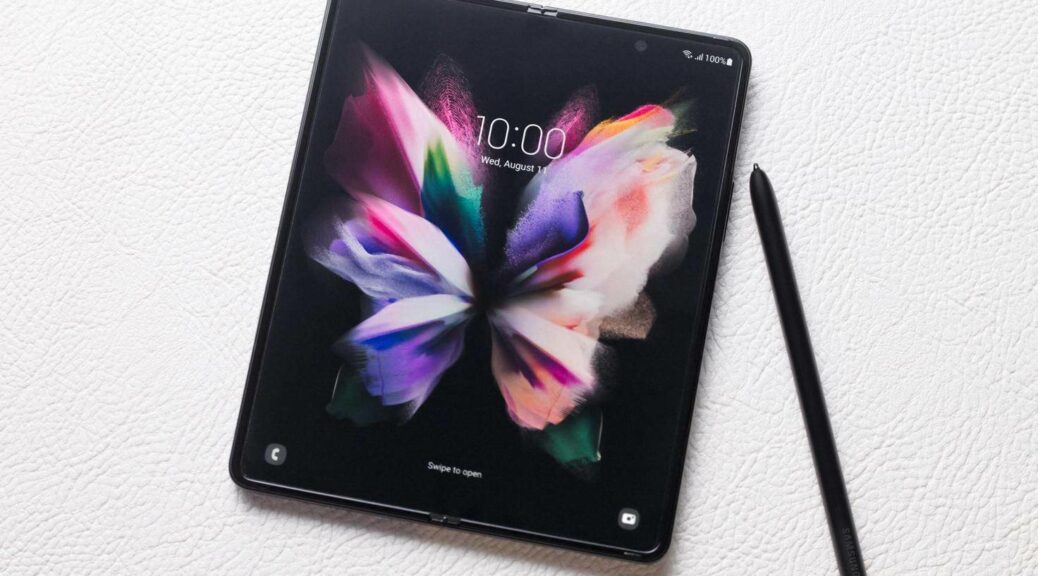 Every year, Samsung uses its unpacked event in August to present numerous new products. This time there: two new smartphones with a foldable display as well as new smartwatches and headphones. One novelty was missing, however.

Usually, Samsung also introduces a new Galaxy Note in August. This time, however, fans waited in vain for the presentation. Instead, everything revolved around the new foldable smartphones.

In 2019, Samsung presented a smartphone for the first time that folds up like a book. The Z Fold 3 is the latest foldable model that can be operated with the S Pen for the first time. When opened, the 7.6-inch dynamic AMOLED display offers plenty of space for drawing. However, the stylus is not included in the scope of delivery, but is only offered as an optional accessory.

Another new feature is the selfie camera hidden under the display, which has a resolution of 4 megapixels – similar to the new Xiaomi Mix 4 . Apart from that, Samsung claims to have worked on the resilience of the smartphone. The screen is said to be 80 percent more resistant than the display of the Galaxy Z Fold 2.

The Galaxy Z Fold 3 5G is now available for pre-order and will be available from August 27th. The cheapest variant with 256 GB storage costs 1,799 euros.

The Galaxy Z Flip 3 is said to be more durable than its predecessor. Image: © Samsung 2021

The Z Flip 3 is only the second generation of the Z Flip series. Apparently Samsung wanted to align the names of the two foldable smartphone model series and therefore skips the two.

There are no major innovations in the current generation. The case is a bit narrower, although the display still measures 6.7 inches when unfolded. The small screen on the outside of the foldable smartphone is twice as large as its predecessor. This is used as an always-on display for reading the time or notifications, but can also be used as a digital viewfinder for taking photos with the main camera. As with the Z Fold 3, Samsung promises more resistance with the new Flip.

Apart from that, Samsung has turned the price around. The Z Flip 3 is available from 1,049 euros, making it the cheapest foldable smartphone from the manufacturer. Pre-orders are now possible, purchases from August 27th.

The Galaxy Unpacked Event at SATURN

Further details on the Galaxy products presented and all important information about pre-ordering can be found on SATURN .

With a new OS: Samsung Galaxy Watch 4 and Watch 4 Classic

Visually, not much has changed on the Galaxy Watch 4. Image: © Samsung 2021

As usual, Samsung also introduced two new smartwatches in August. Biggest innovation in the 4th generation of the watch series: The watches are equipped with a new operating system and a new user interface. Instead of Tizen, Google's Wear OS is used.

However, this is not the usual operating system that is also used on other wearables, but a Samsung-exclusive variant that was developed in cooperation with Google. One UI Watch 3.0 acts as the user interface, which is intended to simplify use. For example, it is possible to reject calls by turning your wrist or to mute notifications.

There are also slight improvements to the hardware. The display has a somewhat sharper resolution, the processor clocks faster and the battery capacity is higher. As with its predecessors, there are numerous sensors on board, which enable sports to be tracked, for example. In terms of design, Samsung has stayed true to the existing look.

The Galaxy Buds 2 can withstand light rain. However, users should not go swimming with headphones. Image: © Samsung 2021

Samsung has also presented the latest generation of its Bluetooth in-ear headphones. Compared to its predecessor, Samsung wants to have improved the noise suppression in particular. This works with the Galaxy Buds 2 with machine learning and offers three levels for filtering background noise. As a result, for example, the voice quality should not suffer when making calls, even if noise suppression is activated.

The Samsung Galaxy Buds 2 can be pre-ordered now and will be available from August 27th. They cost 149 euros at market launch.