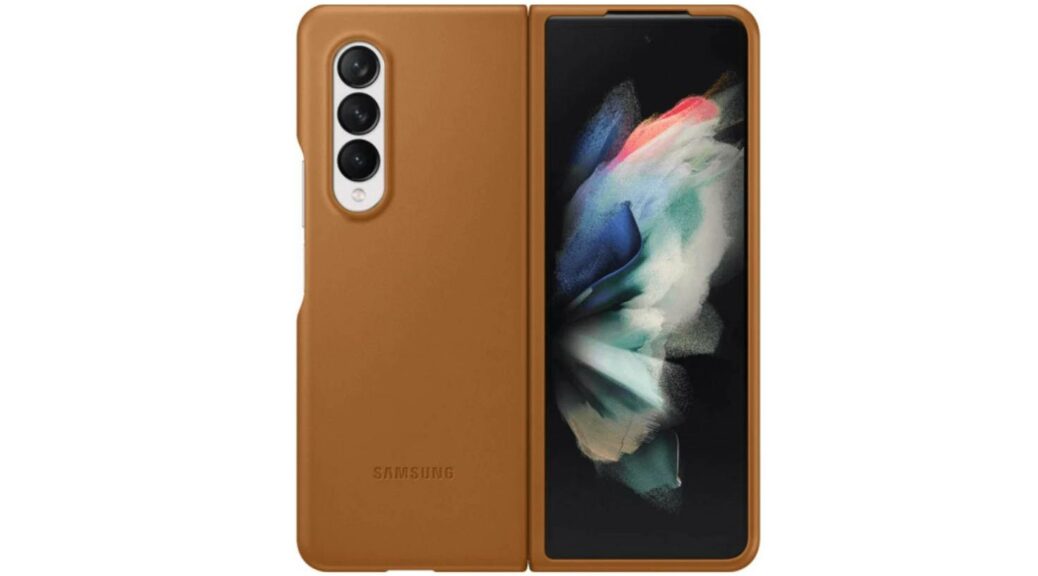 Shortly before the official presentation of the Galaxy Z Fold 3 at Samsung's Unpacked event, all the official specs of the foldable smartphone have already been leaked. In addition, tons of new marketing images of the foldable Samsung phone have been released. As with the predecessor, a folding smartphone with flagship qualities awaits us this year.

The Winfuture website has all the important specifications for the flip phone a few days before the official launch of the Galaxy Z Fold 3 on August 11th. A Snapdragon 888 with eight cores should provide high computing power. There is also 12 GB of RAM and either 256 or 512 internal memory. The 4,400 mAh battery should last at least a full day even with intensive use.

Even with a protective cover, the Galaxy Z Fold 3 creates a classy impression. Image: © Winfuture 2021

When folded, the Galaxy Z Fold 3 fits easily in your pocket. Image: © Winfuture 2021

There are hardly any changes in the two displays compared to the predecessor: The inner Dynamic AMOLED display of the Galaxy Z Fold 3 measures 7.6 inches again and offers a resolution of 2208 x 1768 pixels. The outer display, with a size of 6.2 inches and a resolution of 2268 x 832 pixels, is exactly like its predecessor. However, this time both displays on the Galaxy Z Fold 3 support a refresh rate of 120 Hertz. With the Galaxy Fold 2, the outer display manages a maximum of 60 Hertz.

Both displays are protected with Gorilla Glass Victus. According to Samsung, the Galaxy Z Fold 3 should withstand 200,000 folding processes without any problems. This corresponds to more than 100 folds per day over a period of 5 years. The IPX8 certification is a little surprising. This certifies that the folding smartphone is waterproof for depths of up to one meter. Apparently, Samsung managed to seal the smartphone well despite moving mechanical parts.

No camera miracle, but with an interesting selfie camera

The Galaxy Z Fold 3 is unlikely to be of interest to photo enthusiasts. The triple camera on the back is unspectacular compared to other flagships. A 12-megapixel main camera, a 12-megapixel ultra-wide-angle camera and a 12-megapixel zoom lens with double magnification can be found in the camera module.

A selfie camera is hidden under the inner display of the Galaxy Z Fold 3. Image: © Winfutuere 2021

The two selfie cameras are a little more interesting. The camera on the front offers ten megapixels and is housed in a hole in the outer display. The second camera is a sub-display camera that is hidden under the inner display. However, with only four megapixels, the resolution of this camera is quite low.

Samsung has not yet announced an official price for the Galaxy Z Fold 3. The company will probably only announce this when it is presented on August 11th. Leaker expect the smartphone to cost around 1,899 euros.