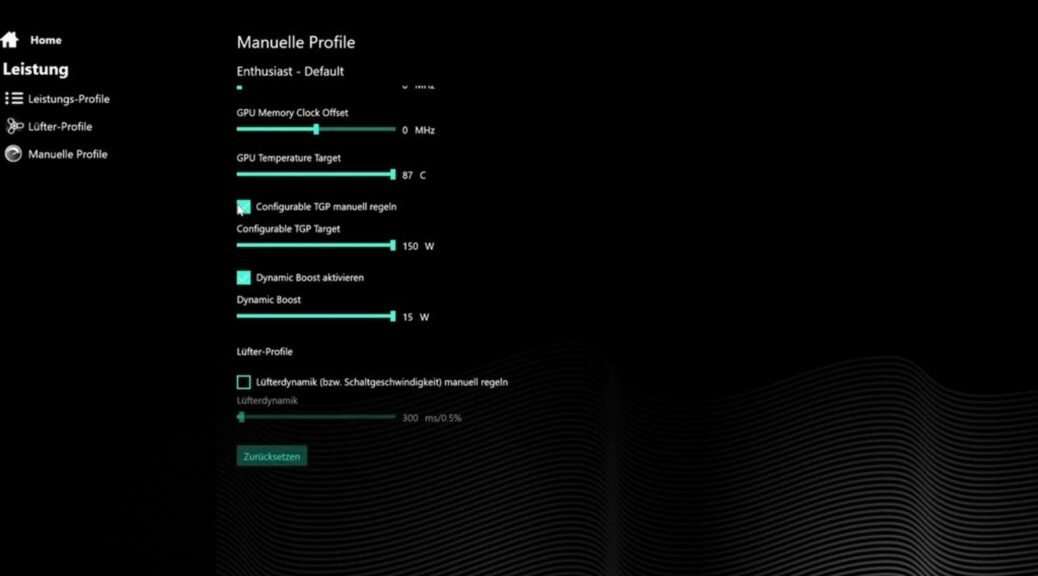 The XMG NEO 15 is one of the most powerful gaming laptops on the market. NVIDIA and XMG have put maximum graphics power into the compact 15-inch notebook – in the form of the RTX 3080 with Dynamic Boost 2.0 and a TDP of 165 watts. Find out what else the XMG NEO 15 can do with the latest NVIDIA technology and how you can win a copy here.

This article was created in cooperation with NVIDIA and XMG.

The heart of the XMG NEO 15 in the maximum configuration is the mobile graphics card NVIDIA RTX 3080 with 16 GB of video memory. It is currently the fastest laptop graphics card in the world . You can use it via overboost mode in the Control Center with the TGP (Total Graphics Power) of 150 watts. Thanks to the NVIDIA Dynamic Boost 2.0 function, you can even tap the maximum 165 watts of graphics power.

Dynamic Boost 2.0 uses artificial intelligence to optimize the clock rates of the graphics card, video memory and processor in real time. The performance of the XMG NEO 15 is pushed to where it is needed most in every game scene. That means the best possible performance in every game with less waste of energy.

Ray tracing and DLSS for the next generation of game graphics

The XMG NEO 15 is equipped for the future of gaming graphics thanks to NVIDA technology. With the ray tracing processing units of the second generation in the GeForce RTX 30 graphics cards, the XMG NEO 15 can display ray tracing effects. That means a simulation of light in real time and thus a believable lighting, realistic reflections and lifelike shadows. More and more games rely on ray tracing, including "Minecraft", "Call of Duty: Warzone" and "Cyberpunk 2077".

Thanks to ray tracing you will experience "Minecraft" with a completely new lighting atmosphere. Picture:

NVIDIA's AI technology DLSS , "Deep Learning Super Sampling", helps. It is responsible for sharpening low-resolution image content while playing – and in the meantime DLSS is so advanced that the result can often hardly be distinguished from the native resolution. The hunger for performance drops and you get more FPS. Special tensor cores in the RTX graphics cards make DLSS possible.

Whispermode 2.0 and other NVIDIA functions

Thanks to Whispermode 2.0, you have the fan volume of your XMG NEO 15 under control. Artificial intelligence ensures that the processor, graphics card, system temperatures and fan control work together so that the laptop delivers maximum performance at the volume you set.

Resizable BAR is responsible for ensuring that the processor can directly access the video memory of your graphics card. This PCI Express function significantly increases the performance of many games. With NVIDIA Reflex , you reduce system latency so that inputs are implemented faster in the game. These and other NVIDIA technologies ensure that you don't have to worry about the hardware while gaming.

Despite the strong gaming power, the XMG Neo 15 has a compact design. Image: © Nvidia 2021

The XMG NEO 15 has a robust metal housing. In addition to the NVIDIA RTX 3080, the AMD Ryzen 9 5800H, as a high-speed high-end processor, is responsible for an enormous system speed. The WQHD-IPS display offers a refresh rate of 165 Hertz – that means a fluid display of movements without cracks or stuttering. And despite the huge 93 watt-hour battery, the laptop only weighs 2.1 kilograms . In addition, thin display bezels ensure a compact design.

Thanks to the opto-mechanical keyboard, you always have full control over your game. Picture:

The keyboard of the XMG NEO 15 has been specially developed for gaming. In addition to the usual functions such as N-key rollover and anti-ghosting for reliable implementation of inputs, it offers RGB lighting that can be individually programmed for each key. Optomechanical silent switches with tactile feedback ensure that all commands are implemented immediately without generating any noise. An actuation force of 60 grams, a key travel of two millimeters and a release point of one millimeter mean that you can completely rely on your skills while gaming. The technology won't let you down.

Thanks to NVIDIA and XMG, we can give away an XMG NEO 15. XMG is a manufacturer from Germany that is committed to maximum performance and has received multiple awards for its service. He develops products in exchange with the community. XMG is very active on Reddit and Discord, for example.

Here to read: the conditions of participation of the competition

You can win this XMG Neo 15. Picture:

You can win an XMG NEO 15 with the model number E21myq and the following equipment :

Here's what you have to do: