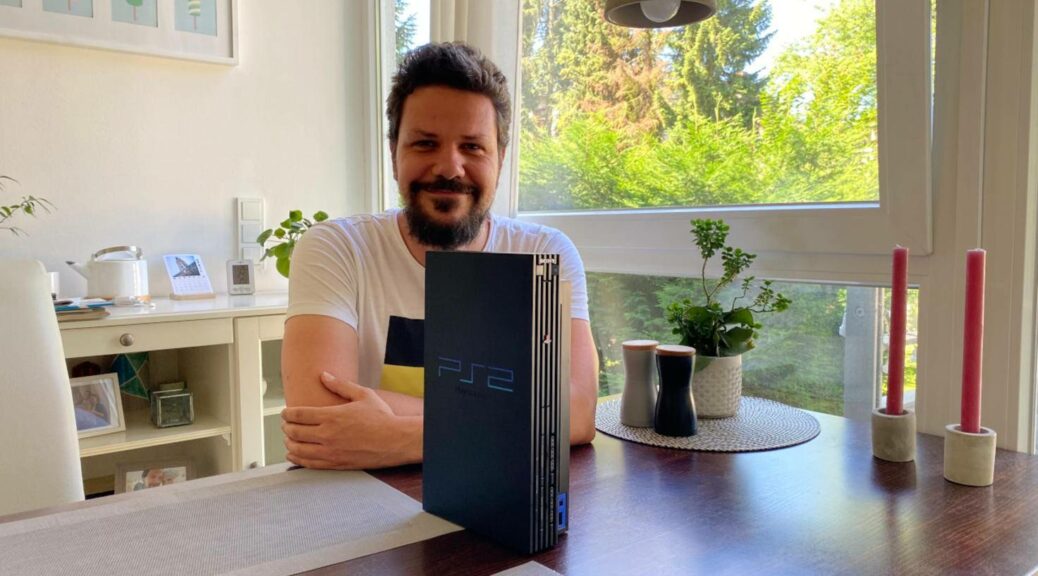 We let the editors have their say: Which technical devices, consoles and gadgets do we associate with special memories? How did technology enrich our everyday lives back then? What are we missing – or are we happy that there are other options nowadays?

Gregor's PlayStation 2 is now resting peacefully in the basement. But he dug it out again for a quick photo. Picture:

In the 90s I was clearly a PC kid – gaming for me mainly took place on an ugly gray and white desktop computer, with which I played classics like "Command & Conquer" or "Diablo". I only came into contact with consoles like the PlayStation 1 through friends, but even then I was an ardent fan of games like "Metal Gear Solid".

When I had a little more money in my pocket for the first time in the summer of 2002 due to my community service, it quickly became clear to me what I would treat myself to: the PlayStation 2, which was almost two years old at the time. I still remember this vividly of the enthusiasm when I successfully connected the small black box to my television with a composite cable and the first images of "Medal of Honor: Frontline" flickered across the screen.

And in fact, this first contact with the PlayStation 2 19 years ago had a decisive influence on the rest of my (gamer) life. Since then, I've actually not gambled on my computer at all, but only with Sony consoles – all of which I bought right up to the launch, right up to the current PS5.

I mean these 1990s Walkmans – just without the New Kids on the Block! Image: © picture alliance / dpa Themendienst 2016

Like so many kids who grew up in the 1990s, I have vivid memories of the first Nintendo game consoles. My uncle, a tech fan himself, had a Super Nintendo early on. We couldn't believe what was being seen on the TV. Playable cartoon!

From early teen years, music became more and more important. Everyone in my class had a walkman. The late, slim versions, with auto-reverse. We spent a lot of time in the electronics store, where we rehearsed the latest songs. The music department became a cool hangout spot.

Today there are games in abundance, often free – and millions of songs at the push of a button. In a way, it was nice to have less choice, easier. Back then.

I'm not that old, I was born in 1984. And yet I grew up watching some of the first video games ever. When we were children, we had an Atari 2600 Junior at home, which was launched in Germany in the year I was born – in 1987 the Atari was even the best-selling game console in the country. I remember games like Pong, Frogger, Combat, Stampede, and Asteroids.

Today video games have gotten dramatically better. However, some retro fans miss the extreme difficulty of some classics. We really had to bite through at the time and the next level was a real success. The Atari games in particular were easy to consume – the whole level often fit on one screen. You conquered a screen and had already achieved something.

But to be honest: Today there are games like"Uncharted 4" , which achieve the quality of a Hollywood blockbuster – without any compromises. There are tons of new retro games and inventive indie games for those who prefer games like this. For me, the Xbox Game Pass is a gambler's dream come true, it gives me access to countless titles. It was exciting to see video games evolve and not everything is better today, see paid in-game content and mobile games with in-game purchases and advertising – mobile games at all! But overall, being a gambler is more beautiful today than ever before.

Like the previous speakers, I grew up as a "gamer child" in the 90s. Starting with the C64 to the Super Nintendo up to "Holiday Island" on our first family PC at home. Staring at the screen for minutes and doing nothing while you wait for the red frame in the newly built hotel, which indicates poor occupancy, to change to green. By the way, a single – in relation to the hotels – much too animated cyclist rides through the empty streets on the island. Oh what was that nice!

My greatest technical treasure, however, dates back to the 2000s and is an electronic dictionary from Sharp. A small box, about as wide as a smartphone is today, that can be opened like a laptop and has a monochrome screen. Such a device was a must in my Japanese studies, as it freed me from constantly leafing through thick dictionaries while I tried to follow the language lessons and solve translation problems. Back then, the electronic dictionary was not easy to get, it had to be imported, which was laborious and cost around 300 euros. I still clearly remember the euphoria when I finally belonged to the group of students who were allowed to call such a device their own.

My loyal companion through my Japanese studies – my Sharp eDictionary. Picture:

I still have the dictionary. However, it is well packed in the closet because everything the dictionary can do, my smartphone can do too. But it's faster, more intuitive, always up-to-date and in color! So my Sharp eDictionary PW-A8100 is obsolete. It's a bit sad. At the same time, however, I am pleased that I no longer have to spend 300 euros today to access the knowledge from a few dictionaries electronically.

I was introduced to the world of video games in the early 90s – be it with relatives or acquaintances. Back then, totally hip: the NES and the Sega Mega Drive. I look back fondly on numerous game sessions with Mario or Sonic before I was to hold my first console in my hands a few years later: the SNES. Preferred game here, especially with friends and on numerous birthdays – of course – "Mario Kart". A long-running favorite that still has a huge fan base today and was a welcome change from early childhood. Over time, numerous other consoles followed – from the PlayStation 1 to the N64 to the Sega Dreamcast

Then, at the end of the 90s, I came into contact with the first cell phones. Presumably an old Ericsson bone that was basically only good for making phone calls. At the time, SMS was not a great idea, after all, cell phones were hardly widespread in society.

That changed quickly at the beginning of the new millennium – and for me it was above all a cell phone that I still fondly remember today: the Nokia 3650. The cell phone with its characteristic rotary dial was particularly out of line with its looks. Nevertheless, after a short period of getting used to it, I was able to hit the keys just as easily and quickly via T9 (pressing a number key several times for different letters) and write SMS.

But the highlight was the camera, which was completely new in 2003. The resolution was only a measly 0.3 megapixels, but the novelty still made for amazed faces in my vocational school class. Everyone wanted to try out the cell phone camera, everyone wanted to take a photo themselves. Standard today, but a real sensation around 18 years ago.