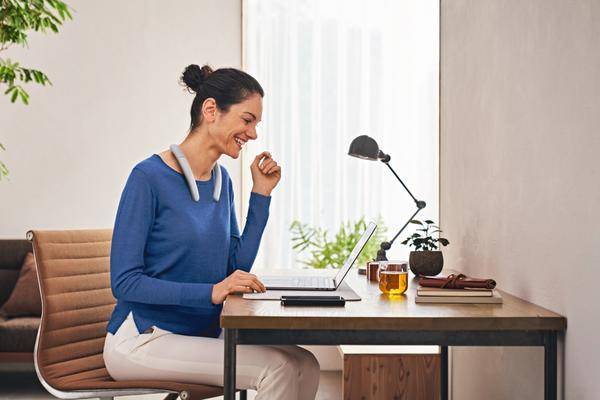 Sony has introduced a new Bluetooth speaker that can be hung around the neck. The unusual device called SRS-NB10 is the successor to the SRS-WS1 from 2019 and is particularly intended to appeal to home office workers.

According to a Sony press release, the neck speaker is so comfortable that it can be worn all day.

With multipoint support for multiple devices

The SRS-NB10 is equipped with a broadband speaker unit that is angled upwards so that the sound is fully directed towards the wearer. Even when other people are in the room, according to Sony, the user can understand every word in video conferences without having to turn up the volume. Two built-in directional microphones (beamforming) should also ensure good voice quality. In addition, the SRS-NB10 has a multipoint connection, so that it can be paired with two devices at the same time, for example with a laptop and a smartphone.

The microphone of the neck loudspeaker can be muted during conference calls with a simple click on the MIC mute button. The volume control is just as uncomplicated: the user only needs to touch the buttons on the side to adjust the volume. When listening to music, you touch another button on the loudspeaker to start or stop playback.

In stores in September 2021

According to the manufacturer, the battery life of the SRS-NB10 is around 20 hours. Just ten minutes at the socket should be enough for a running time of another hour. The loudspeaker is splash-proof in accordance with protection class IPX4. The SRS-NB10 is expected to come onto the market in September 2021 and cost around 150 euros. It is available in either anthracite or white.

The basic principle of the Sony SRS-NB10 is strongly reminiscent of the Bose SoundWear Companion from 2018. This is also a loudspeaker that can be worn around the neck.