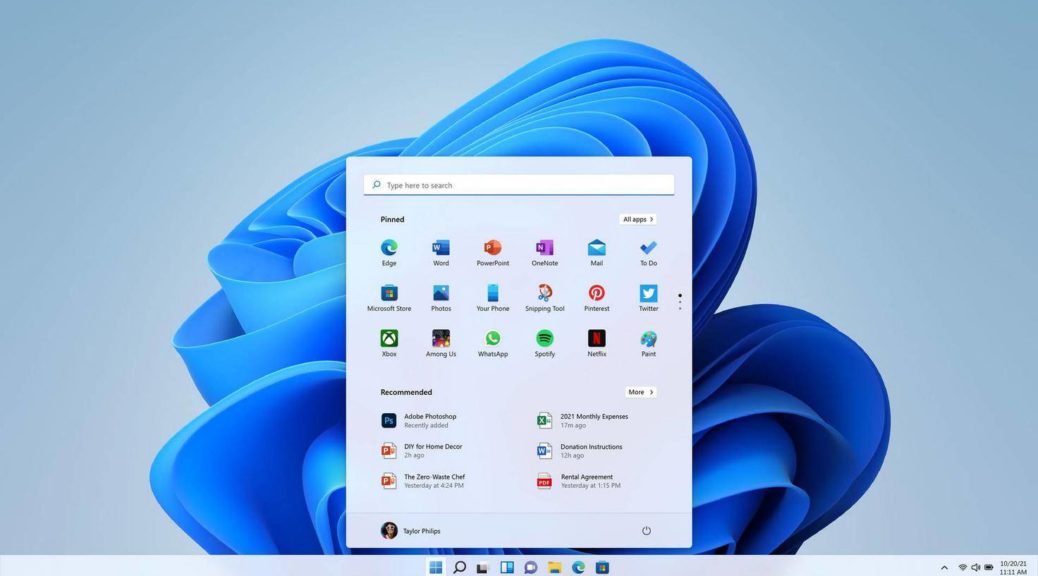 Windows 11 should appear as a free update for all Windows 10 users this year. We'll tell you what new features there are and what the system requirements are.

Microsoft has finally let the cat out of the bag: On Thursday, the software giant presented its new Windows 11 operating system. This should appear in autumn 2021 and be available as a free update for all Windows 10 users. With Windows 11, Microsoft continues some of the developments of the previous system, and also brings some complete innovations.

The most noticeable innovation in Windows 11 is the revised software design. The windows and controls become rounder, softer and numerous transparency effects are used. In this way, Windows 11 is supposed to get a more modern and fresh look.

The start menu tiles from Windows 10 and Windows 8 are largely eliminated. Instead, app icons increasingly dominate the start menu and other areas of the system. There has also been a change in the arrangement of the icons in the system tray. In Windows 11, they are in the middle of the screen by default, which should be particularly useful on widescreen monitors. If desired, the symbols can still be pinned to the left edge of the taskbar.

This is what the widget overview of Windows 11 looks like. Image: © Microsoft 2021

The live tiles are also no longer available in Windows 11; instead, new widgets come into play. As usual with smartphones, these offer an overview of certain information or quick access to certain functions of individual apps. The widget overview can be called up via the taskbar.

Snap layout is both a design and a work element. The new function ensures that individual program windows can dock with one another if they are open at the same time, so that they do not constantly overlap.

If desired, users can save so-called snap groups. These are several programs that are opened in a common view. This is particularly practical for all users who work with the same program windows every day and who want a fixed layout that can be opened with one click.

Users who work with multiple monitors can also arrange snap groups across two or more displays. Windows 11 automatically detects when the additional displays are switched on and then automatically rebuilds the saved interface.

The video chat and conference software Microsoft Teams is firmly integrated into the system with Windows 11 and should be available directly via the taskbar. Windows 11 users should be able to start a text or video chat with friends or colleagues practically at any time, even if they are using a different device with a different operating system. In return, Skype is to be omitted as a permanently installed app.

The tablet mode is improved and should stand out more from the desktop mode. In tablet mode, symbols and buttons are automatically drawn further apart to make operation easier. Moving the windows and changing the window sizes should also become easier in touch mode. In addition, there should also be haptic feedback when writing with input pens such as the Surface Pen in the future.

Android apps are available in the Windows 11 store. Image: © Microsoft 2021

One of the most exciting new features is the ability to run Android apps natively on Windows 11. TikTok, Instagram and Co. should in the future be easy to install and use on PCs. To do this, Microsoft works with Amazon. Thanks to its Fire tablets, the shopping giant has many years of experience and numerous business partners in the Android sector. The Android apps should be available under Windows 11 directly from the Microsoft Store.

The Windows Store is getting more interesting

There should be a lot more content in the Microsoft Store. Image: © Microsoft 2021

The Windows Store should offer even more content in the future and offer curated collections, for example. In addition, Microsoft wants to go a different way than Apple and Google and allow developers to use their own payment systems in their apps without paying a fee.

There will still be an exception for games. Microsoft wants to at least relieve the developers there. From August 1st, they will only have to pay 12 percent instead of 30 percent of their sales to Microsoft.

The GamePass becomes an integral part of the operating system. Image: © Microsoft 2021

Windows 11 has one of the interesting features in store for gamers. Just like the Xbox Series X, PCs with Windows 11 can use Direct Storage. Game worlds are loaded directly from the memory without detours via the main processor. This allows assets and content to be loaded more quickly, but is only supported in combination with fast NVMe SSDs, such as the current Xbox has on board.

In addition, Windows 11 should offer an auto-HDR function and make HDR display possible for games that do not support this by themselves. The prerequisite is that games run via the DirectX 11 or DirectX 12 interfaces.

Windows 11 comes out this fall and is free for most

Windows 11 should be available from autumn 2021 and offered as a free upgrade for current Windows 10 users. However, it will very likely also be possible to buy your own license for the operating system.

These are the system requirements for Windows 11

Whether an upgrade to Windows 11 is possible depends primarily on the system requirements. They are higher than in Windows 10, but still include weaker systems overall. These are the minimum requirements: