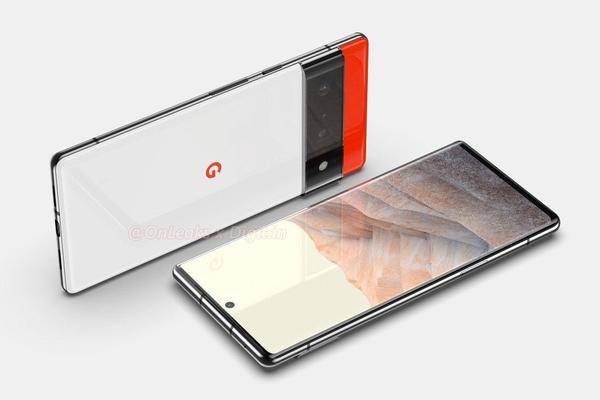 Not only Android 12 gets a completely new look – also the new Pixel Phones. Fresh renderings show the new look of the Google Pixel 6 Pro in bright colors and with a characteristic rear camera.

After the well-known leaker Jon Prosser recently leaked the Google Pixel 6 , the confirmation of the Leaker OnLeaks now follows, Digit writes. Accordingly, Google is planning a 6.67-inch, rounded screen with a punch-hole camera on the front for the Pixel 6 Pro, which is housed in a hole in the display.

An AMOLED screen is to be used as the screen. However, it is still unclear which frame rate is supported. The normal Pixel 6, on the other hand, should measure 6.2 inches diagonally. You can see very narrow display bezels, and Google will probably install a fingerprint sensor directly under the screen.

Google Pixel 6 Pro: back with a completely different look

Even if Google is apparently not completely saying goodbye to the dual-tone design of the Pixel series, the back has a greatly changed look. If you add the camera hump, the Google Pixel 6 Pro is said to be 11.5 millimeters thick. The triple camera has horizontally arranged lenses, including a wide-angle lens, a periscope camera and an as yet undefined lens near the LED flash. Some sensors and a microphone complete the main camera.

Release in autumn 2021 – with your own Google chip?

A newly positioned SIM card slot can be seen in the rendered images on the left side of the device, while dual loudspeakers are located on the top and bottom of the front. Wireless charging should also be one of the features. According to rumors, the Google Pixel 6 could also get a chipset developed directly by Google . It will take a while until then: A release of the Pixel 6 series will probably be due in autumn, as usual.