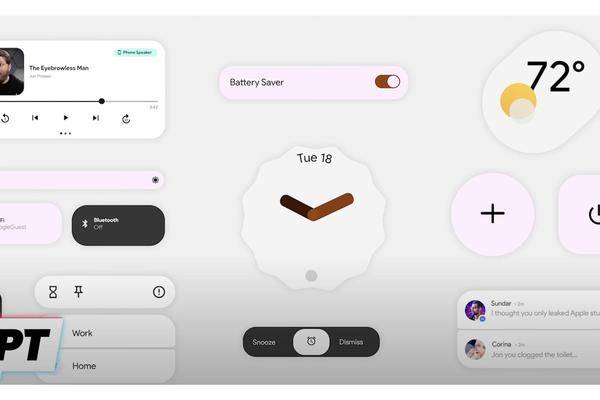 A leak shows several new design elements from Android 12. The upcoming version of the mobile phone operating system is based on a uniform, minimalist look. There is also information about new functions.

The well-known leaker Jon Prosser has published some pictures from Google 12. In a YouTube video, he also shows alleged excerpts from a presentation from the upcoming Google I / O event. In addition to the design, the advertising clip also shows new Android 12 animations, which appear smooth and somewhat rubbery.

The leaked design elements include a new music widget, volume slider, new weather widget, clock and refreshed WiFi and Bluetooth buttons. The final Android 12 version will certainly contain other new elements. According to the promotional video, a new function is to group notifications from different apps, as Winfuture writes.

The choice of colors in Android 12 is striking. For example, Google has opted for less contrasting, softer colors such as pink, light blue and light brown. That matches the supposed colors of the new Google smartphones Pixel 6 and Pixel 6 Pro . The usual black and white also play a role.

Google I / O will start on May 18th, so tomorrow. At the online event, in addition to a preview of Android 12, new hardware should also be seen, including the wireless Pixel Buds in-ear headphones and a smartwatch called the Pixel Watch. The new pixel smartphones will follow at a later date. The stream can be viewed on theGoogle event website .