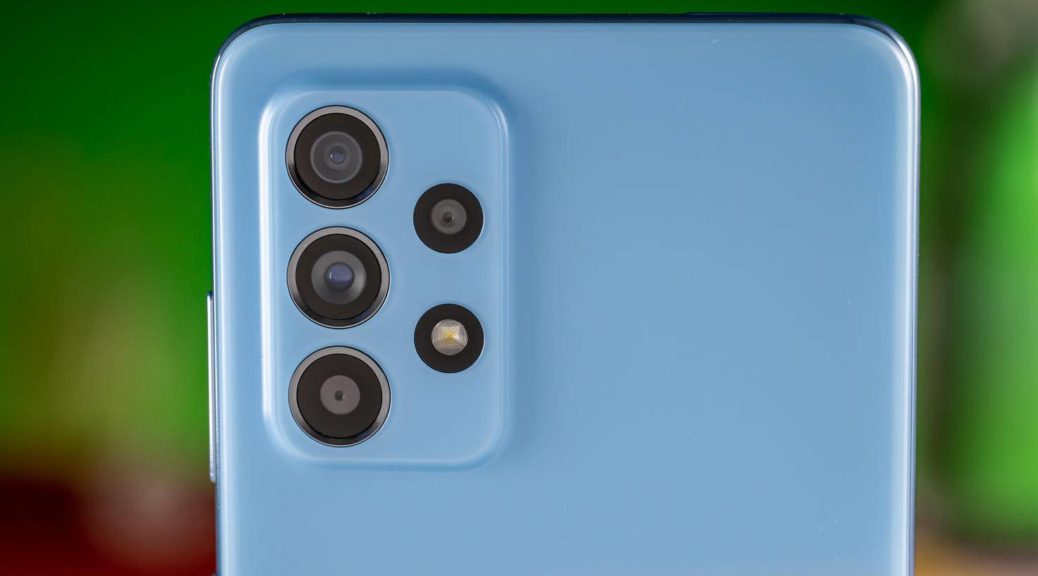 The Samsung Galaxy A52 wants to be a great smartphone for everyone. The highlights include a 90 Hertz AMOLED display, four cameras with a new 64 megapixel main sensor, IP67 certification and stereo speakers – for 350 euros. In the test, we checked whether the Galaxy A52 is really a good smartphone for the average user.

The front of the Galaxy A52 is quite unspectacular. The frame around the display is slightly thicker at the top and bottom than on flagships and the selfie camera is housed in a hole in the display. The frame is made of plastic , which, however, has a smooth, metallic appearance. The back is also made of plastic.

Practical: the back is matt and therefore the mobile phone is more secure in the hand without slipping out. Most flagships have a smooth glass back that slips away easily and should therefore be protected by a cover. This is not absolutely necessary with the Galaxy A52. Also noticeable: the camera dome merges almost seamlessly into the housing and I don't see it as a separate component compared to many other cell phones.

The camera dome stands out less from the housing than on many other smartphones. Image:

The smartphone is available in the four colors Awesome Blue, Awesome Violet, Awesome White and Awesome Black. Our test model is colored "Awesome Blue", a light blue shade. Unfortunately, I involuntarily associate this with the baby blue toys for toddlers. The smartphone therefore seems a little too much like children's toys to me. Also because it is made of plastic on top of that. But this is somewhat subjective and there are other colors to choose from. After all, you don't see such a color on smartphones every day.

Samsung Galaxy A52 Buy now at

The high-contrast AMOLED display has a refresh rate of 90 Hertz. Image:

As usual from Samsung, the display is once again particularly high-quality. The 6.5-inch screen uses high-contrast AMOLED technology with pixel-perfect lighting. The resolution of 2,400 x 1,080 pixels is sufficiently sharp for the size. A special feature is the refresh rate of 90 Hertz, which OnePlus once made known with the OnePlus 7 Pro.

The main advantage of the higher frame rate is the sharper display of moving images, especially when scrolling through apps and websites. So the perceived system performance also has a higher effect. It is a benefit that most users are likely to perceive subconsciously, but I believe that they still benefit from it. However, the processor is too weak for "high refresh rate gaming" at 90 Hertz. For this, the appropriate FPS (frames per second) would have to be achieved in games.

When used outdoors, the display shines bright enough for use in the sun. Flagships with even brighter displays have a certain advantage here, but the content is still good enough to see.

The display is bright enough for use in the sun. Image:

The Snapdragon 720G serves as the processor, the performance of which is below that of the Snapdragon 765G. The latter is built into upper middle class smartphones such as the Google Pixel 5 and the LG Velvet . At least the graphics performance of the Snapdragon 720G is decent , so the demanding "Sonic Forces" runs smoothly in the highest settings. A flagship chip would only be an advantage for 90-hertz gaming. The processor is supported by 6 GB of RAM in the model with 128 GB of internal memory and 8 GB of RAM in the 256 GB model. Together with the chip, both are sufficient for multitasking.

The refresh rate can be reduced from 90 to 60 Hertz in the menu – but this only saves a little electricity. Image: © Samsung 2021

Apps load a little slower than flagships, but most users will be happy with the performance; the phone isn't noticeably slow. Unfortunately, there is only Wi-Fi 5 and not the newer Wi-Fi 6, Bluetooth 5.0 is responsible for pairing with headphones. The fingerprint sensor is built into the display. Sometimes it doesn't recognize the finger and the smartphone unlocks a little more hesitantly than my Galaxy Note 9 with its physical fingerprint sensor on the back. In addition, the optical sensor in the display is less secure – to put it in a nutshell, it represents a technical step backwards .

Thanks to the IP67 certification, the smartphone is protected against the ingress of water. Image:

A smartphone for everyone should also be suitable for seniors – and for them there is a "simple mode" with larger buttons. Image:

Also annoying: the 4,500-watt battery can be charged quickly with a 25-watt power supply, but only a weaker 15-watt power supply is included in the scope of delivery. The battery life is very good and even with 90 Hertz instead of the alternative 60 Hertz, it lasts longer than the day before. The Galaxy A52 is also certified to IP67. So it should be able to withstand rain showers and involuntary excursions into puddles. Good news: modern smartphones like the Galaxy A52 now offer comprehensive options for seniors and people with impaired vision and hearing. All the better because, according to Samsung advertising, the device wants to be aimed at "everyone".

In contrast to most flagships, the Galaxy A52 has a jack connector. Image:

The Galaxy A52 offers stereo speakers, with the upper one facing forward and also used for phone calls and the other being stuck in the frame at the bottom. The speakers sound quite clear and also suggest a certain amount of bass. They can also play relatively loud. Although they do not match the quality of the speakers in flagships like the Galaxy S21 Ultra 5G, they are among the best speakers in the mid-range cell phone . Music also sounds good via the jack connection with headphones and can be played loud enough.

There are four cameras on the back, the 64-megapixel main camera with OIS is new. Image:

Compared to its predecessor, the Galaxy A52 has been given a new main camera . This has a resolution of 64 instead of 48 megapixels and offers optical stabilization (OIS) against blurred images. The other cameras are already known from the predecessor: a 12-megapixel sensor for ultra-wide-angle shots, a 5-megapixel sensor for macro photos and a 5-megapixel depth sensor that helps with portrait photos with the main camera. The selfie camera has a resolution of 32 megapixels again.

Selfies have a decent sharpness, but are not too color-accurate (my hat is actually green) Image:

… however, there are noise reduction artifacts that make details look a bit blurred. Image:

With a full 64-megapixel resolution, the quality increases significantly, especially in terms of sharpness and richness of detail. Image:

The contrast range (difference between light and dark parts of the image) is on average. Image:

The night mode helps when there is little light. Image:

A picture with the ultra wide angle camera … Image:

… with the main camera … Image:

… and with the telephoto lens. Image:

The macro camera again presents the user with special challenges. He has to hold the smartphone very steadily in front of the subject in a narrow area of around 3 to 5 centimeters and this has to be illuminated by enough light. Then you can take interesting macro shots that look good as long as you are not viewing them on a large monitor or television.

… then it allows unusual perspectives. Image:

It's difficult to get the right distance … Image:

… as a reward there are extreme close-ups. Image:

The Galaxy A52 can record 4K video at 30 frames per second – with all cameras except the macro lens and the depth sensor. And it is possible to switch cameras while recording. The 4K video quality is very good , actually better than the photo quality. Only with the ultra-wide-angle sensor is there noticeable noise, but the performance is not at all bad for a camera of this type. Unfortunately, the image stabilization can only be used in Full HD – and in this resolution the videos look pretty noisy.

Conclusion & alternatives: good smartphone for everyone

For an RRP of only 350 euros for the Galaxy A52 with 128 GB of storage, the smartphone has a lot to offer . Particularly noteworthy: the 90 Hertz AMOLED display, the 64 megapixel main camera with optical stabilization, the stereo speakers and the IP67 certification against ingress of water. The high 4K video quality is also a highlight. If you don't need the new features and are satisfied with a lower performance, you could get the predecessor for currently around 250 euros ( our test ).

Mobile photographers can let off steam with the four cameras. Image:

Further alternatives can be found in our list of recommended smartphones up to 400 euros. The LG Velvet is particularly eye-catching, as it offers a more powerful processor and a larger OLED display, but without 90 Hertz. The Xiaomi Mi Note 10 Lite has similar features as the Galaxy A52 with a particularly large battery and is made of metal and glass, and a 30 watt power supply is included. It does not have a 90 Hertz display, stereo speakers and is not waterproof. These smartphones are priced well, but have also been on the market for a long time. It is particularly noteworthy that the Galaxy A52 is well set up even at its original price .

Overall, the Galaxy A52 is a good mid-range smartphone with a strong price-performance ratio. There is also a 5G model with a 120 Hertz display, a slightly more powerful processor and 5G modem, which, however, costs 70 euros more. The Galaxy A52 should be the better offer for most users.

Samsung Galaxy A52 Buy now at