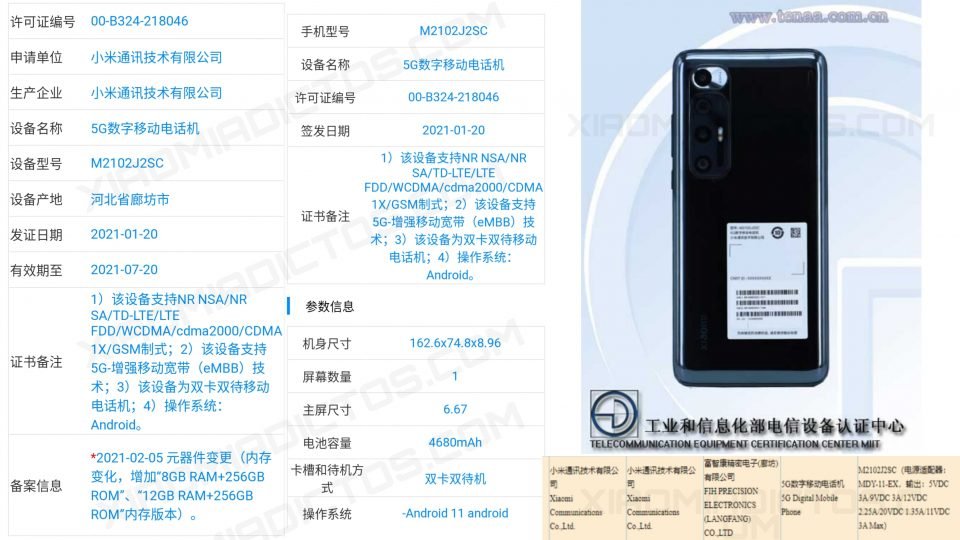 Xiaomi Mi 10S, is the new smartphone of the Chinese firm that has recently been found in the internal code of MIUI 12 , in this way already knowing the official name that the special version of the Xiaomi Mi 10 that we have been tracking for a long time will have , and which visually looks quite similar to the Xiaomi Mi 10 Ultra.

Thus trzpro of equipment Xiaomiui while he was analyzing the code of the latest updates from MIUI 12 has discovered a line of code that unveiled the brand name would this new special version of the Xiaomi MI 10 we all know and being validated by kacskrz , a well-known Xiaomi insider and fellow XDA-Developers .

Next, we will talk about all the details that are known about this device, which are quite a few, all of them taken directly from MIUI by myself, and at the same time other specifications, all taken from different certifications from Chinese certifiers such as 3C and TENAA .

Xiaomi Mi 10S, the special version that is yet to come

Specifications of 3C and TENAA certifications, in addition to its official design | Code name thyme and model M2102J2SC.

In detail, adding more information to this fact, this Xiaomi Mi 10S will come equipped with a powerful Qualcomm Snapdragon 870 processor , a vitaminized version of the Snapdragon 865 that the standard Mi 10 has, in addition to having generous 8 GB memory configurations of RAM + 256 GB of storage and another of 12 GB of RAM + 256 GB .

Likewise, this Xiaomi Mi 10S will equip a 6.67 ″ screen, presumably it would be AMOLED with a frequency of 120 Hz, in addition to dimensions of 162.6 x 74.8 x 8.96 quite average according to what we see in the market, and supplying it with energy a 4780 mAh battery including a 33W fast charge charger in the box.

On the other hand, the Xiaomi Mi 10S will have a 4 camera module, the main one being 108 MP , added to a super wide angle sensor, a macro camera, and it is unknown if the fourth camera would be a telephoto lens or a simple sensor. depth that would not add much to the whole.

The price that the Xiaomi Mi 10S will have is still a mystery, in the same way it is unknown when this brand new special version of the Xiaomi Mi 10 will be launched on the market, although unfortunately it is very unlikely that we will see it leave China , because there are no signs of the existence of a global ROM, in addition to that it has not been certified in the West either.