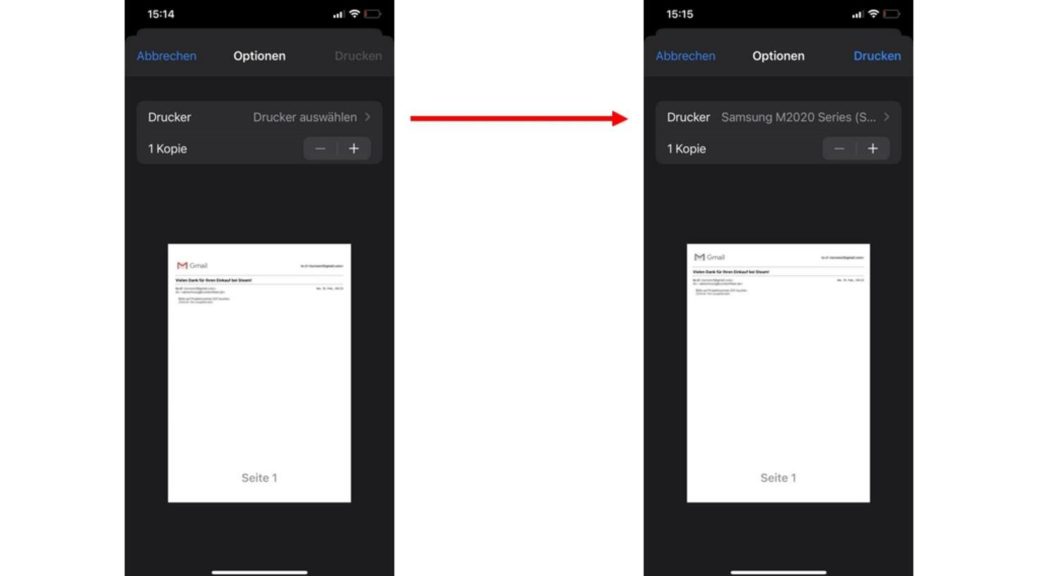 You can connect many WiFi printers to your mobile phone. We'll tell you how this works and what differences there are between iOS and Android.

Many modern printers can no longer be controlled from the computer only via USB cable. You can also receive print jobs wirelessly via WLAN – so printing is also possible from a smartphone. We'll tell you how to do it and what to look out for.

Connect the printer to the WLAN

The basic requirement for printing from a smartphone is a WiFi-enabled printer. Such devices are widespread in the trade, but not yet standard. A WLAN-enabled printer is usually still set up on the computer, mostly using software provided by the manufacturer. The process is generally quite similar, but differs in detail from manufacturer to manufacturer or from model to model, so that we can only advise you to consult the manufacturer's manual or online help at this point.

Print from iPhone with AirPrint

In order for you to be able to print from an iPhone, the corresponding printer must not only be in the same WLAN network, but also support the AirPrint protocol introduced by Apple for communication between smartphone and printer. Most of the current wireless printers already support AirPrint. Apple lists a number of printers on its website that work with AirPrint. If your device is not there, printing from the iPhone will not work.

If your printer fulfills the requirements and is also registered in the same WiFi network as the iPhone, printing works as follows:

This is what the print preview looks like on the iPhone. Image: © Apple / Screenshot: 2021

Printing from the Android smartphone

When printing from an Android smartphone, the prerequisite is that the printer is connected to the WiFi network. For several years, Android has had a universal software interface for controlling network-compatible printers. However, the manufacturers of the respective printers must offer corresponding plugins for their printer models, which are available via the Google Play Store. The plugins are installed almost automatically:

On Android, printing mainly works via the manufacturer's own plugins. Image: © Samsung / Screenshot: 2021

Alternatively, you can search for the right plug-in for your printer in the Google Play Store and install it. You can find out whether the manufacturer offers one and which one it is either in the manual or on the manufacturer's website.

Then the Android smartphone should be able to automatically recognize the printer. Repeat the process from point 1 and select your printer at point 4. Then tap on the print icon to trigger the printing process.

This is what the print preview looks like when the printer has been recognized. Image: © Samsung / Screenshot: 2021

Not every app supports printing

If an app does not show you the option to print a document or a picture, this is usually not due to your smartphone or printer, but to the missing function in the app. Then check whether you can print the corresponding file from another app.