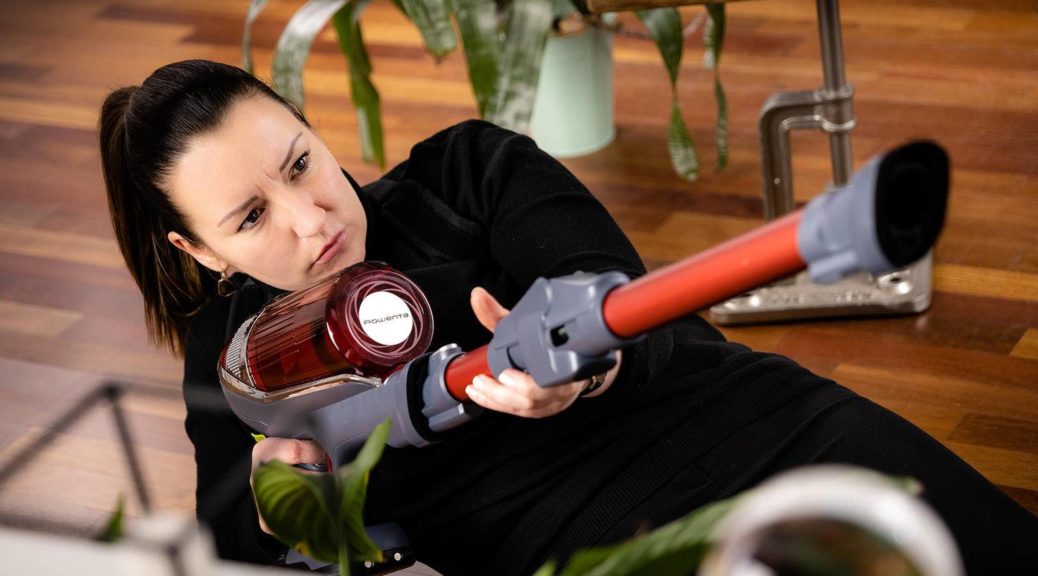 If there is a quantum of dust in your apartment again, its mission begins: The Rowenta X-Force Flex 11.60 Animal is ready at any time to serve Her Majesty . The cordless vacuum cleaner can bend like some Bond girls and is strong in the fight against the hair of white Persian cats.

But the Rowenta X-Force Flex 11.60 Animal has yet to show whether it is as strong in the fight against dust as 007 in a deadly mission . Ring free for the (somewhat unequal) comparison:

1. Suction power: As effective against dust as Bond is in the fight against bad guys

James Bond sometimes has to bend a lot – the X-Force Flex does it for you when sucking. Picture:

One eliminates dust, the other eliminates bad guys. But who is more efficient at this? Even if some James Bond got rid of quite a few bad guys: No Bond actor can match the efficiency of the Rowenta X-Force Flex 11.60 Animal. While 007 usually has to fight hard with his adversaries, the vacuum cleaner doesn't give its archenemy – dust – a chance. The vacuum cleaner is not only particularly thorough, but also particularly fast thanks to a maximum suction power of 130 Airwatts. Do you only suck twice ? Are you kidding me? Are you serious when you say that! With the X-Force Flex you save yourself multiple vacuuming the same place.

10 centimeters – that's how high the leftover popcorn supposedly piled on the floors of the cinemas in December 1964, when "Goldfinger" was played around the clock. No problem for the Rowenta X-Force Flex 11.60: It also sucks in larger dirt such as corn flakes or peanuts.

In addition, the Rowenta model is particularly durable: the powerful 25.2 volt battery lets you vacuum for 45 minutes without interruption. If the apartment is not yet clean, you simply change the battery and you can continue without waiting. While you've been cleaning the whole house, Bond is still not finished: The shortest film in the series, "Quantum of Solace", runs 106 minutes, the longest film, "On Her Majesty's Secret Service", even 147.

No question about it, James Bond had to prove himself in many challenging situations and showed his versatility in breakneck stunts. Sean Connery even received special martial arts training for his role as an agent. However, all actors from Sean Connery to Daniel Craig – who, by the way, is the smallest of all Bonds at just 1.78 m tall – will have problems reaching as far under furniture as the Rowenta X-Force Flex 11.60 Animal. The vacuum cleaner has a practical flexible tube that allows vacuuming under the sofa without bending over or doing acrobatic stunts. In addition, the suction head can be rotated 180 degrees so that you can easily get into all corners.

3. Animal Kit: Against animal hair (not only) from white Persian cats

The Animal Kit contains several nozzles for the fight against animal hair. Picture:

It was so striking that it is only too happy to be parodied: Bond villain Ernst Stavro Blofeld appears in several films – most recently in "Specter" (2015), played by Christoph Waltz. Always by Blofeld's side: his white Persian cat. Even if James Bond couldn't take on his adversary, he could have a short game with the hair of his cat – he would swap one of his gadgets from Q for the X-Force Flex 11.60. It comes with a practical animal kit, which includes a mini electric nozzle for deep-seated animal hair, a crevice nozzle and a sofa nozzle. Wherever animal hair is stalking you, just kill it!

Vacuum cleaner vs. Bond: 3: 1 (one point for both, as Bond defeated his opponents without a vacuum cleaner)

4. Ease of use: no comparison to Q's inventions

Unforgotten in the films are the inventions of Bond's MI6 colleague, the tinkerer genius Q. There were for example the exploding pen from "GoldenEye" and the Rolex Submariner from "Live and Let Die". However, some Q-inventions have a problem: rocket backpacks and crocodile submarines are certainly not as easy to use as the Rowenta vacuum cleaner. And they can quickly become dangerous in the wrong hands. Just think of the nervous Bond opponent who unknowingly played with the said ballpoint pen – and thus with the lives of everyone present.

The Rowenta X-Force Flex 11.60 Animal works without cables or bags and offers a smart display with control indicator. Here you can find all information about performance and runtime at a glance. Switching between the different modes is a breeze. If you drive from the tiled floor onto a long pile carpet, you simply activate the additional boost at the push of a button.

For a cordless vacuum cleaner that lasts as long as the X-Force Flex 11.60, the charging time is extremely short. On average, around 155 minutes are enough to fully recharge the battery. Nevertheless: The vacuum cleaner cannot keep up with the loading time of James Bond's favorite weapon, the Walther PPK. And so it is in the end:

Conclusion: unbeatable as an everyday weapon

James Bond undoubtedly has a lot to offer! And he's popular too – both with cinema audiences and women. The Rowenta X-Force Flex 11.60 Animal is still the bigger help for everyday life. The cordless vacuum cleaner is an asset to every household. It cleans quickly and efficiently, leaving more time for the important things in life. Whether you have a shaken or a stirred martini is up to you …