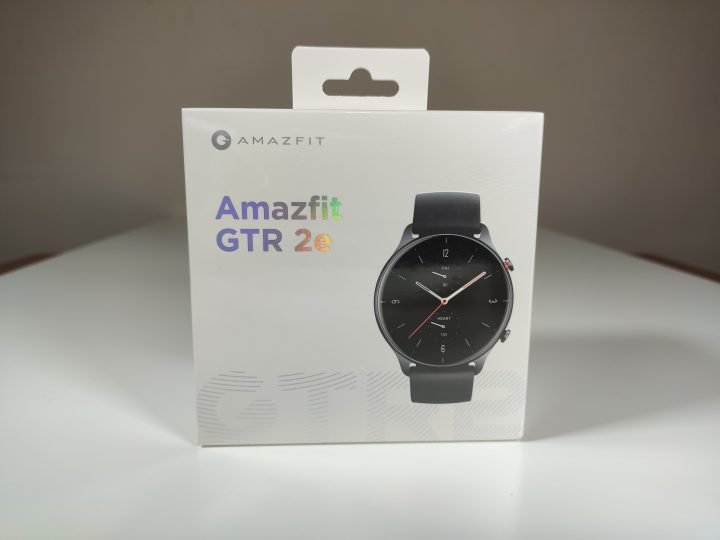 Huami has just launched in Spain the new Amazfit GTR 2e , as we tell you here , it is a "smartwatch" or smartwatch focused on sport, being a special and cheaper edition of the Amazfit GTR 2, but not worse, since although are different they share quite a few characteristics. In this article I will show you the unboxing, detailing what is included in the box of the Huami Amazfit GTR 2e, and also what my impressions are after having been testing it a bit.

To begin we find a simple and beautiful white box, with the letters of Amazfit GT2 2e changing color depending on how the light hits it, and shows us the design that this Huami smartwatch will have. In addition, in the box, apart from showing us some of its outstanding characteristics, it boasts a practical flap to make the removal of the film or "plastic" much easier than if it did not have it. 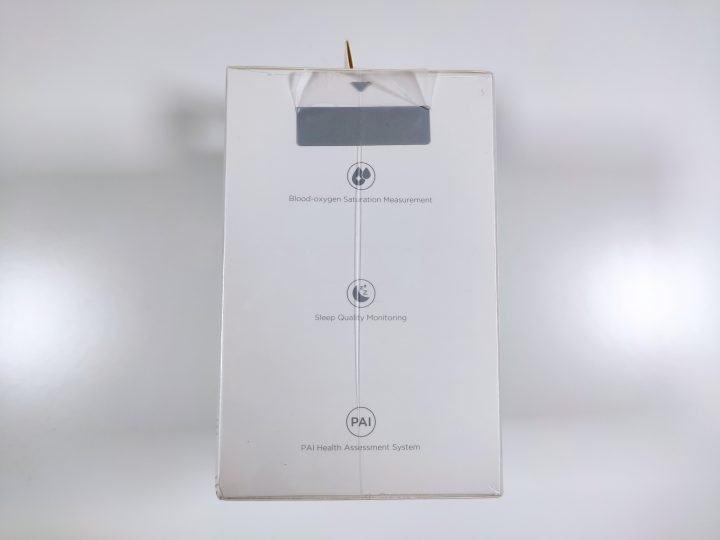 Side of the Amazfit GTR 2e box, with a flap to facilitate the removal of the film.

Once we remove the film and open the box, we find another box inside, and inside it you can see what really matters, the Amazfit GTR 2e perfectly presented, giving us a quite premium and careful feeling . 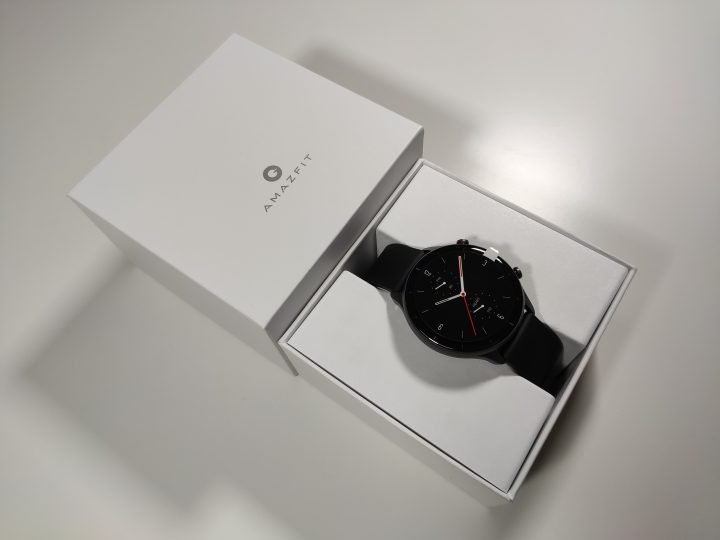 This is what the Amazfit GTR 2e looks like when you open the box.

But that's not all, taking out the cardboard on which the watch is fastened, we discover that it has 2 compartments , one on each side. These contain inside the instruction manual, and the magnetic charging base , to be able to charge the Amazfit GTR 2e. 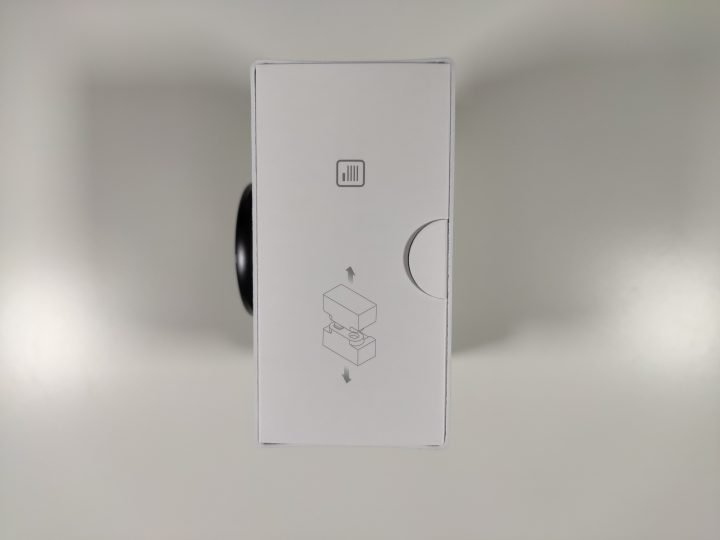 One of the compartments where the manual and the charging base are located.

And there would be nothing else, all that would be what the unpacking has been, and the contents of the box would only consist of: 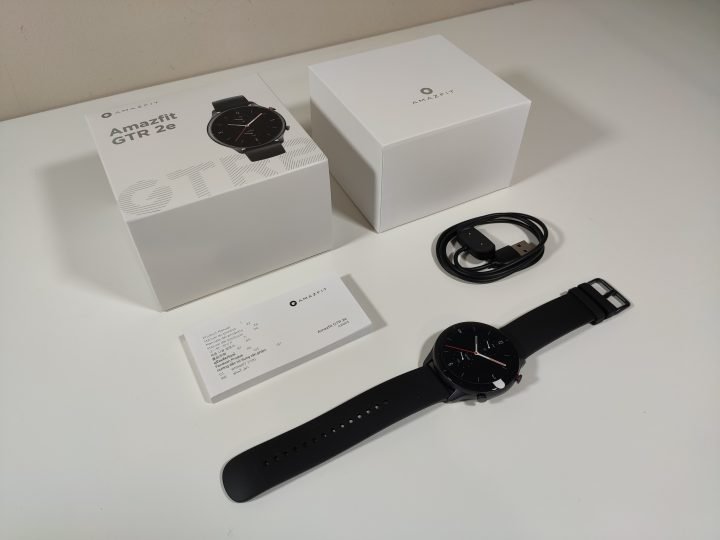 I have not yet been able to test it enough to be able to tell you in full about this smartwatch, but for now if I can tell you certain details that have surprised me, and others that may need an improvement and will be solved later with an update.

To begin with, we will talk about its design, although everyone has their own opinion on aesthetics, I think that this Amazfit GTR 2e will be liked by everyone who has it . The design of this smartwatch tries to emulate the mechanical watches of a lifetime, and they have been a very successful and elegant one, with its 2 side buttons and its aluminum alloy bezel .

Another positive detail is its strap, it feels very soft to the touch and does not bother the skin even after wearing it for a whole day, and it does not seem to get very dirty. It also has a lot of travel with all those holes and it will fit anyone like a glove, whether your wrist is very large or very small , and it is very easy to put it on and take it off.

This watch as soon as you turn it on asks you to synchronize it with the Zepp application (formerly called Amazfit) and it was also very easy, since it shows you a QR code so that you can scan it with your mobile camera and takes you to Google Play so that you download it. Then within the app, you log in with your Google account, and click to synchronize and it will come out to scan the QR code that will appear on the Amazfit GTR 2e again.

Once perfectly synchronized, you can start using the clock that will automatically start counting your steps and you can use all the other characteristics, such as measuring your heart rate, blood oxygen saturation, body temperature, stress levels, quality of the sleep, humidity level , among others.

For the little time that I have been testing this Huami watch, I can say that one of its strengths is its 2.5D screen , since in addition to being quite wide and being able to see the content it shows with HD resolution without problem , it has AMOLED technology and that makes it show very vibrant colors, and pure blacks , in addition to extending the autonomy of the charge of the Amazfit GTR 2e. 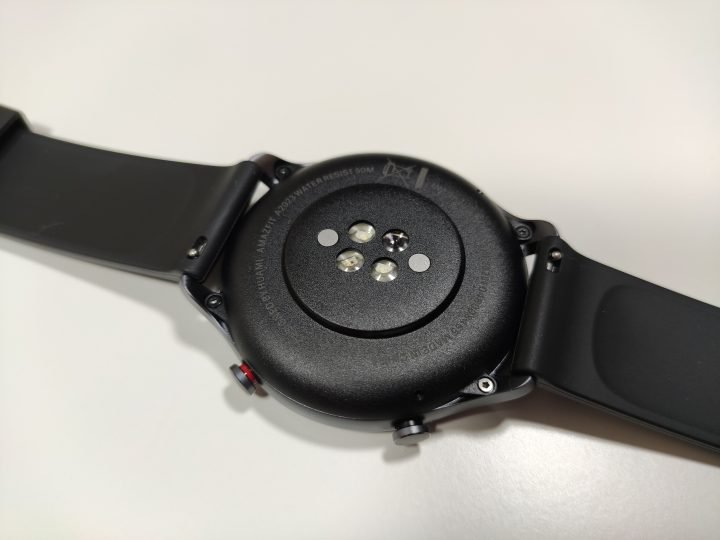 Different sensors and the charging pins of the smart watch.

Speaking of autonomy, although it is still impossible to give a final verdict on that, I can say that the watch came to me with 42% battery, and after more than a day of use and with all the measurement settings activated, I have 22 % of battery remaining still, despite the fact that even the Amazfit GTR 2e itself warns you that all those settings will consume a lot of battery, which is impressive in my opinion. 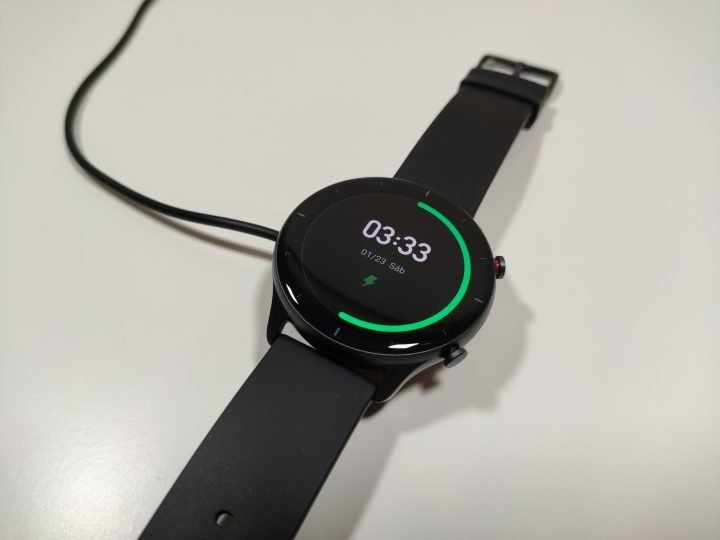 Recharging the Amazfit GTR 2e in its charging base, from 0% to 100% in approximately 1 hour.

Also its screen has a high brightness, so it is not difficult at all to be able to view it in any possible situation , and it can be adjusted both automatically and manually, in addition to that the viewing angles are quite good.

In turn, in the vibration settings of the Amazfit GTR 2e from the application, you can create your own personalized vibration pattern , to be able to differentiate between the alarm, a call, an incoming SMS, a notification from an application, etc. Unfortunately, it does not seem possible to create a pattern for each application , for example one for WhatsApp and one for Telegram, all user applications would share the same pattern.

Finally and among other things, talk about its very light weight, which is just over 32 grams and also quite a thickness, since it is only 10.8 millimeters , which make it one of the thinnest smartwatches on the market. .

Something that can be improved is the performance, since in some specific situations, such as viewing graphs with a lot of information of a saved activity (specifically in one of more than an hour walking), I have had a considerable decrease in performance while sliding between them to view them, but apart from what they will surely solve with updates , the performance in general is quite good.

Sadly, the intelligent assistant to be able to execute commands with our voice, is only available in English , even so I tried to try it by changing the language of the Amazfit GTR 2e to English, but I was not able to make it work, so maybe it comes limited in the firmware.

Another detail that may also be improved in an update is how it manages notifications, since for example in Telegram, it shows you each message separately even if they are from the same chat and that makes it a bit difficult to read the messages, in addition, some are also repeated . In turn, they should improve the way to discard notifications , since we are used to sliding notifications aside on the phone, but here you have to hold them down and then give a trash icon , something quite uncomfortable, and I hope they solve soon.

And to finish, and as a curiosity, the 2 side buttons, the top one being the power and menu, and the bottom one customizable, can be turned, but strange as it may seem, they do not do more than that, since turning them does not It has any function , something that I found quite shocking, because since they make them rotate, they less than serve to move you through the interface of the Amazfit GTR 2e.

Where to buy the Amazfit GTR 2e 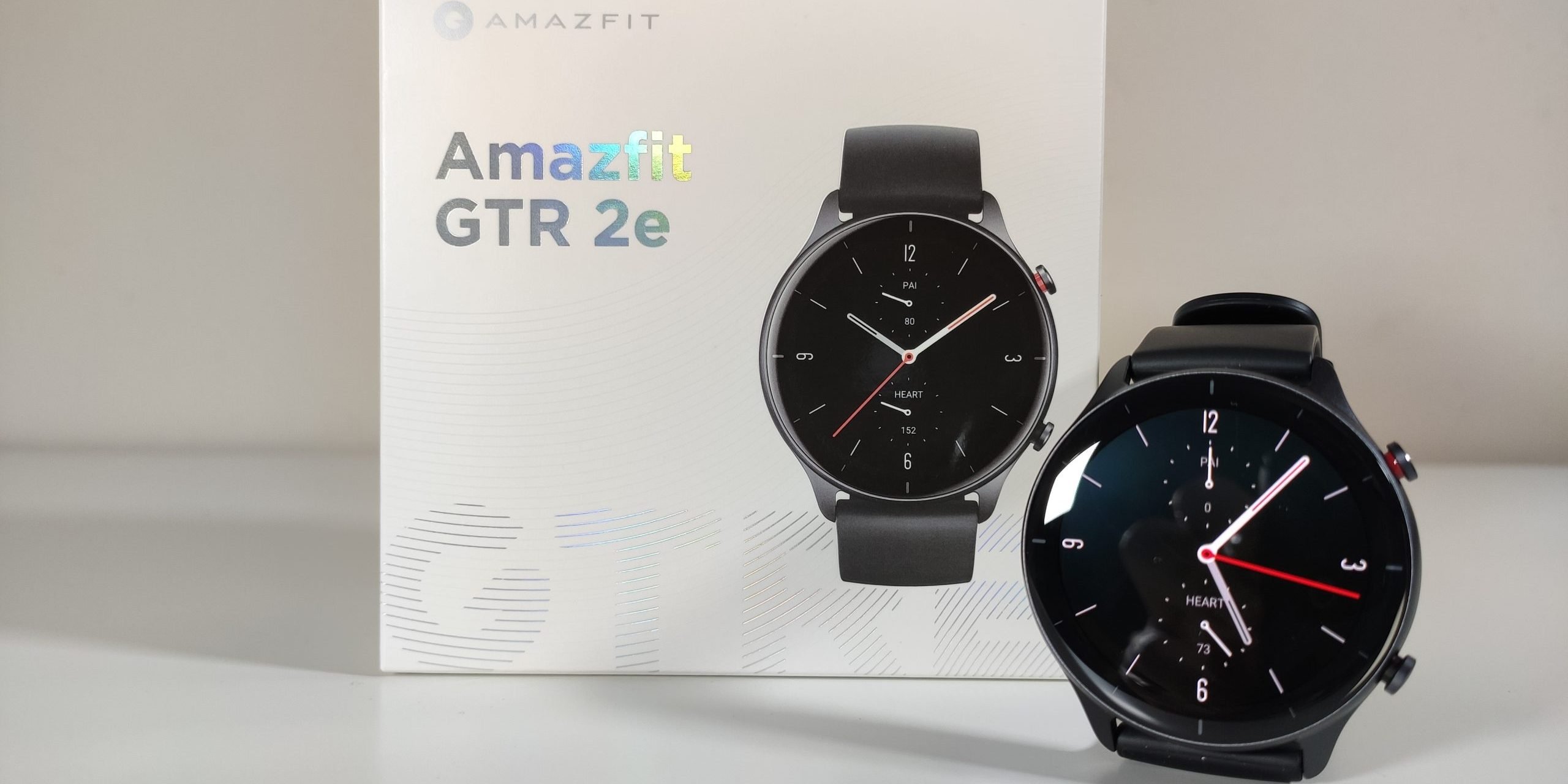 International shipping from China and Poland