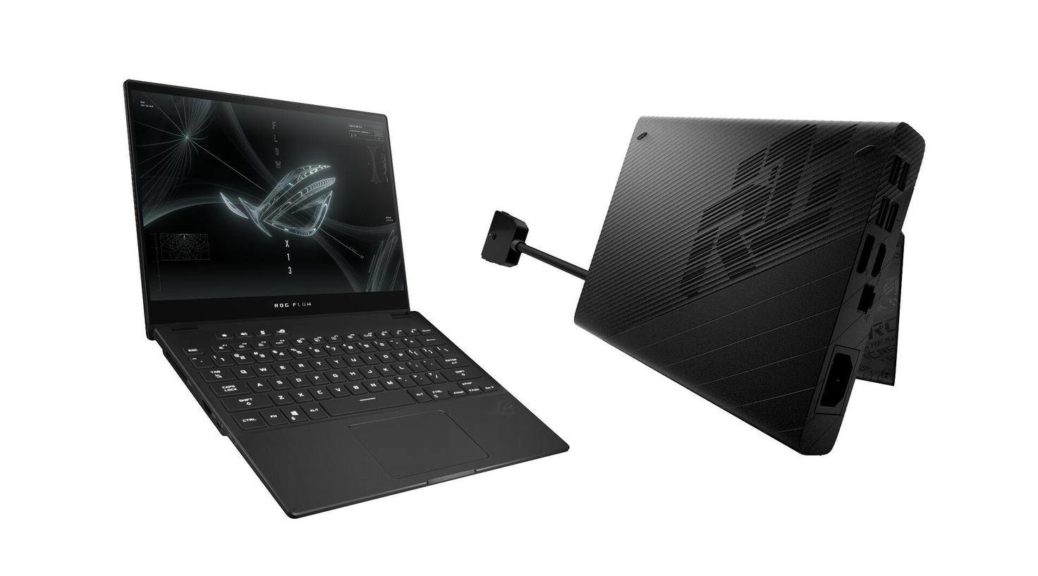 New laptops played a big role at CES 2021. The most exciting models include devices with OLED displays, light gaming notebooks with the new Nvidia RTX 3000 graphics cards and impressive innovations. These are our 9 laptop highlights from CES 2021.

The Asus ROG Flow X13 is a 2-in-1 laptop for gaming. Something like this is rare and Asus has come up with something to make the concept work. The convertible laptop has a display that can be rotated 360 degrees and uses a thin design for use as a tablet. The only internal graphics card is the weak GTX 1650, which does not need extensive cooling. Still, the Flow X13 offers massive gaming performance .

This is ensured by an external graphics card in a special housing that also has many additional connections such as 4 x USB 3.2, DisplayPort 1.4, HDMI 2.0, LAN and an SD card reader. The main body of the case is the new Nvidia GeForce RTX 3080 with 16 GB of video memory, the top model among the new mobile Nvidia graphics cards.

The ROG Flow X13 is expected to hit the market in the middle of the first quarter from 1,500 euros. The external graphics card with dock called "XG Mobile-eGPU" must also be purchased at an as yet unknown price.

At 16.99 millimeters, the new Razer Blade 15 "Advanced" or "professional model" is a good millimeter thinner than its predecessor and weighs only 2.14 kilograms. Nevertheless, there is strong technology inside, including the new Nvidia graphics cards up to the RTX 3080 . However, it remains with the tenth generation Intel Core chips up to the Intel Core i7-10875H. The respective processor is supported by up to 32 GB of RAM.

The Razer Blade 15 professional model will be available from January 26th from € 2,599. There is also a simpler basic model from 1,799 euros.

The Asus ZenBook Pro Duo 15 OLED has two screens – and the larger one uses high-quality OLED technology. Apart from that, the 15.6-inch main display has the advantage that it covers 100 percent of the DCI-P3 color space. The PANTONE-certified touchscreen can be operated with a pressure-sensitive pen . The smaller 14-inch display is angled underneath and also has a resolution of 3,840 x 2,160 pixels.

The powerful RTX 3070 serves as the graphics card. There is up to 32 GB DDR4 memory and an SSD up to 1 TB in size. The webcam is compatible with Windows Hello. 2 x Thunderbolt 3, SUB 3.1, HDMI 2.1 and a headset connection are available as ports. Bluetooth 5.0 and Wi-Fi 6 are also on board.

The Asus ZenBook Pro Duo 15 OLED will be available in Germany from € 3,999 in the first quarter.

For some professional gamers, a mechanical keyboard is part of the game. The 17.3-inch Gigabyte Aorus 17G has such a keyboard and the optional 300 Hertz display with full HD resolution and IPS technology with stable viewing angles is tailored to competitive gaming. The new Nvidia graphics cards up to the GeForce RTX 3080 Mobile are responsible for the performance.

On January 26th, Gigabyte would like to reveal more information about the Aorus 17G, including perhaps price and release date.

The MSI GE67 is a bit more massive and should offer a stronger performance. Image: © MSI 2021

The two new "Raider" models from MSI do not want to compromise on performance . That is why the gaming notebooks are a bit thicker and heavier than most of the others, but within an acceptable range. The 15.6-inch GE66 Raider is 23.4 millimeters thick and weighs 2.38 kilograms, while the GE76 Raider with a 17.3-inch panel is 26 millimeters thick and weighs 2.9 kilograms.

With both laptops, you can choose between a Full HD display with 240 Hertz or 300 Hertz, and a 4K screen with 60 Hertz is also available. New Nvidia graphics cards right up to the RTX 3080 with 16 GB of video memory put games on their feet. As Notebookcheck writes, larger laptops have more space for a good cooling system, so the GE67 could achieve better performance with the same graphics card than thinner and lighter laptops.

Apart from that, there are Intel processors of the 10th generation up to the Intel Core i9-10980HK as well as up to 64 GB of RAM and two M.2 slots with PCIe 3.0 connection for the SSDs. There are quite a few connections, namely 3 x USB-C, 2 x USB-A, a mini DisplayPort connection and one HDMI. Wi-Fi 6E, 2.5 Gbit Ethernet and a SteelSeries keyboard with RGB lighting for individual keys are also offered.

The new Acer Predator Triton 300 SE weighs only 1.7 kilograms and still has one of the new Nvidia graphics cards. Specifically, the GeForce RTX 3060 Max-Q is responsible for the performance. On top of that, there are the new Intel Core i7 processors of the 11th generation and the Full HD screen has a refresh rate of 144 Hertz. The RGB keyboard can be configured in three zones, HDMI, Thunderbolt 3 and USB 3.2 Gen 2 are also offered. The battery life should be up to 10 hours.

The Acer Nitro 5 is an affordable gaming laptop. Image: © Acer 2021

If you can live with the classic plastic design, the new Acer Nitro 5 is a powerful and affordable gaming laptop. It is available in sizes 15.6 or 17.3 inches. The processors are the new 11th generation Intel Core H35 or the equally new AMD Ryzen 5000 up to the flagship Ryzen 9 5900HX. Various Nvidia graphics cards up to the top model RTX 3080 are offered.

The Lenovo ThinkBook Plus Gen 2 has an e-ink display on the back. Image: © Lenovo 2021

The first-generation Lenovo ThinkBook Plus already offered an additional e-ink display on the back. Such displays are known from e-readers and are characterized by very low power consumption, they also do not reflect and are particularly suitable for reading. The second generation proves that the idea is not a flash in the pan. The new 2-in-1 device offers a 13.3-inch display and a 12-inch e-ink display on the back, both with a resolution of 2,560 x 1,600 pixels.

In the new generation, the response time of the e-ink display is said to have been improved. The 2-in-1 has become lighter at 1.3 kilograms and thinner at 13.9 millimeters. Another input pen for the e-ink display is included. A maximum of an 11th generation Intel Core i7 is responsible for the performance, there is up to 16 GB of RAM and an SSD up to 1 TB. When used with the IPS screen, the battery should last up to 15 hours, with the E-Ink screen up to 24 hours. There are two USB-C ports with Thunderbolt 4 and an audio connector.

The ThinkBook Plus Gen 2 should be available at the end of May from 1,299 euros.

The HP Elite Folio dares something new. It is a 2-in-1 convertible with a 3: 2 display , 5G modem and an energy-saving ARM chip . This is an unusual combination, but the HP Elite Folio also has an unusual design . The display can be pulled up to the trackpad and even all the way to the front. So it is not folded backwards. In addition to operation via keyboard and trackpad, touch and pen operation are also options.

Thanks to the energy-saving Qualcomm Snapdragon 8cx Gen 2 ARM chip, the convertible achieves a remarkable runtime of 24.5 hours when watching offline videos. Thanks to fast charging, the battery is 90 percent full in 90 minutes. The touch display has a resolution of 1,920 x 1,280 pixels, the HP Elite Slim Active Pen is included. There is also an infrared webcam for video calls and Windows Hello that can be covered by a slider.

The SSD measures up to 512 GB, the RAM 16 GB, there is Wi-Fi 6, Bluetooth 5.0, two USB-Cs and a headset connection. The 2-1 convertible is 16 millimeters thin and weighs only 1.29 kilograms. Four loudspeakers with tuning from Bang & Olufsen provide the sound and there are several microphones with "Cortana Far Field Premium", which speaks for a good suitability for video conferences.

The Elite Folio should be available from February 2021, HP has not yet revealed the prices.