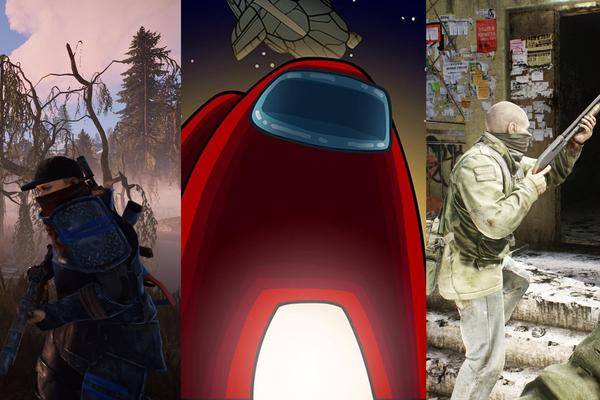 Some games suddenly become bestsellers after years. Hundreds of thousands of game fans watch streamers playing titles like "Rust", "Escape from Tarkov" or "Among Us", but these are not new at all. Why is that?

Lately, an interesting phenomenon can be observed more and more often: As if out of nowhere, a previously moderately popular game dominated the gaming scene and led the sales charts. Other titles suddenly celebrate a surprise comeback and are on everyone's lips, even though they are actually quite a few years old and there is basically hardly any news worth mentioning.

How is it that some games all of a sudden relegate blockbusters to the places that call for significantly more marketing power? The answer to that is complex, but live streaming almost always plays a role.

"Rust": From nowhere to the hype peak

There are a few survival games in which resources have to be gathered in order to survive and to build equipment or buildings. "Rust" started early access in 2013, and in 2018 the game was officially released. Players start out naked and initially only have a stone and a torch. Later on, they can even build aircraft and work with other players to build complex structures. That sounds exciting, but it's not something that other games don't offer.

Nevertheless, "Rust" will be on everyone's lips in early 2021. This also has to do with new content, the developers have constantly improved the game and added new features. In addition, a so-called "force wipe" was carried out: An update required the resetting of all game progress on all servers. A positive side effect: everyone has to start over in "Rust" – ideal conditions for newcomers.

The main reason for the meteoric success of "Rust" is, however, the large number of viewers on the live streaming platform Twitch: At the end of 2020, some streamers, some of which have a large number of regular viewers, started a joint "Rust" private server. Twitch celebrities such as Shroud (almost 9 million followers), xQc (over 7 million followers) or Pokimane (around 7 million followers) ensured enormous audience numbers. Later, large Spanish-speaking streamers also started a private server. Including: TheGrefg, who holds the audience record on Twitch with 2.4 million simultaneous viewers.

More and more streamers jumped on the hype to attract viewers and get a "piece of the pie". "Rust" became the most watched game on Twitch. This also puts it at the top of the streaming platform's game list – the corresponding advertising effect is almost priceless. On the download platform Steam, "Rust" was also the absolute top seller in no time at all. Incredible for a game that is over eight years old and has yet to be released on consoles in 2021.

"Escape from Tarkov": The orchestrated success

The success story of this shooter is similar to that of "Rust". However, "Escape from Tarkov" has not even been officially released: A closed beta test for PC has been running since 2017. If you buy the game on the website of the Russian developer Battlestate Games, you get access.

"Escape from Tarkov" is a shooter with a clear focus on realism. The players have to infiltrate an area as a team, collect valuable loot and then make it off the map alive. However, the exit is at a different point each round. In addition, other players pursue the participants' lives in order to steal equipment and loot. Injuries that are as realistic as possible and a permadeath system, through which all equipment is lost when the character dies, drive the tension in the game to extremes – also for spectators.

"Escape from Tarkov" already experienced a player high in January 2020: For a short time, the shooter was the most watched game on Twitch because a number of big streamers boosted the hype. Battlestate Games also used the so-called Twitch Drops function: viewers receive bonus content for the game if they watch long enough. In addition, new content and resetting game progress simultaneously wooed old and new players.

This recipe for success was repeated at the turn of the year 2021: an update, Twitch Drops and a "Force Wipe", plus some top streamers playing "Escape from Tarkov" – the shooter is already back at the top. And that although it is not even available for purchase on the major online platforms.

"Among Us": a recipe for success by chance

It is difficult to find out exactly which Twitch streamers originally started the phenomenon "Among Us", but the simple game quickly became the biggest game in the world in 2020.

It is a social deduction game à la "werewolf" or "mafia". Up to ten players have to complete a series of simple tasks in a small area in "Among Us", but some participants work undercover against the team. The "imposters" secretly try to sabotage tasks or to isolate and kill fellow players without being discovered. The game is stopped again and again and the participants discuss which of them is behind the assassinations. Then they vote on which suspect to exclude from the game.

The fascination of "Among Us" lies in the social togetherness: The fraudsters lie as far as they can, while the rest of the team develops common strategies for clarification. And the audience is excited – the perfect recipe for a live streaming blockbuster!

"Among Us" was released in 2018 for smartphones and PCs without much fanfare. Until around mid-2020, the little game with functional 2D graphics was completely unknown. The three-person development studio Innersloth originally only designed the game for mobile devices, for players who are in the same room together – online multiplayer was not part of the plan, according to an interview with Kotaku .

But then in 2020 people were forced to spend more time at home, and the pandemic made interaction via the Internet more important. First, streamers in Mexico, Brazil and South Korea started playing "Among Us". For a long time, the social mobile game was much more successful in these countries than in the USA, for example.

The international success story started when Twitch streamer Sodapoppin (nearly 6 million followers) played "Among Us". Innersloth's programmer Forest Willard on the rise of the game: "I heard Pluto, who works at Twitch, tell Sodapoppin about it. And I think it was something like Pluto knew about it from the Steam sale. The Steam sale came about because of an offer from us and so on. Then Sodapoppin infected streamers like xQc, Andy Milonakis and a few others and everyone just played it. "

Within the live streaming bubble, "Among Us" continued to spread: "It's interesting to see how it moves through certain communities," says designer Marcus Bromander in an interview with Kotaku. "Sodapoppin and xQc play it with a League of Legends streamer and then all of a sudden tons of other League of Legends streamers play it. And then Hearthstone streamers play along and a lot of Hearthstone players catch up with it at."

In fact, "Among Us" suddenly became so successful that its makers canceled a sequel that had only been announced in 2020. Instead, Innersloth wants to continue to focus on working on the game. Ironically, Willard stated that he offered "Among Us" to some streamers when it was originally released, but it didn't meet with much interest at the time.

Even if targeted marketing played an important role in the first examples, it is reassuring that some successes can also come about by chance. Even more important, however, is the recognition of how much live streaming platforms like Twitch are now influencing the success of video games and what powerful role streamers play in this. If a title dominates the streams, it also rises in the sales charts. This way, even players who are not interested in live streams will be aware of it.

A game can be technically impressive and set new standards in terms of graphics – if it's not fun live, it may be overtaken by a creative mobile game.