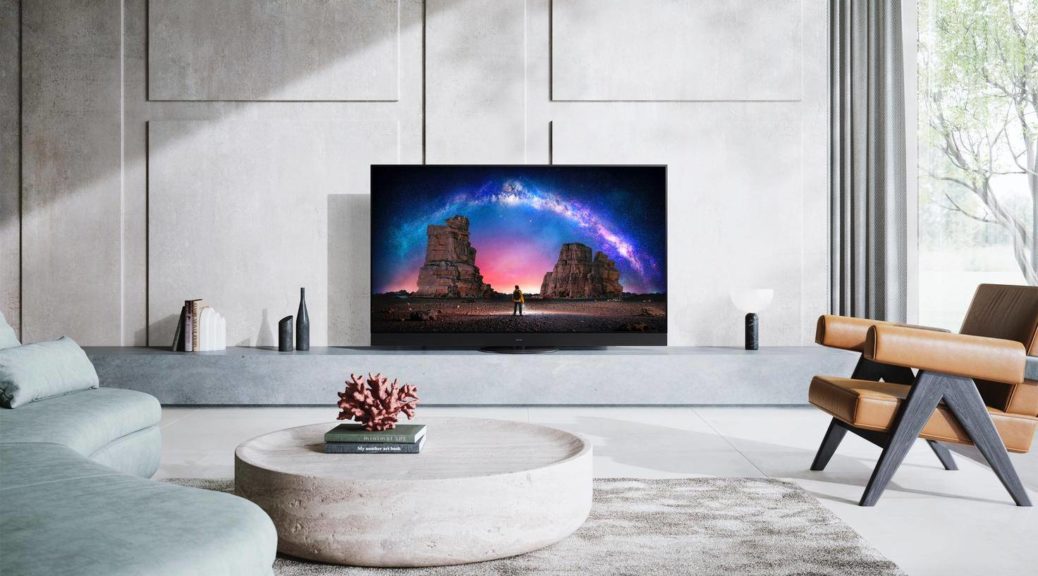 Shortly before CES 2021, Panasonic and TCL presented innovative high-end TVs. Panasonic has the OLED flagship JZW2004. This offers a very bright OLED panel and HDMI 2.1 features for the next-gen PS5 and Xbox Series X consoles. TCL has also published information on the innovative mini LED TV C825 – it is said to be the Samsung and LG competitors challenge with thousands of dimming zones.

Panasonic has announced its top OLED model JZW2000 via press release . This is the successor to the HZ2000. The specialty of the series is a specially made OLED panel and a heat sink behind it. The new model also offers a "Master HDR OLED Professional Edition" panel with higher brightness than conventional OLED TVs. This year, however, there will also be OLED premium TVs similar to that from Sony and possibly LG. No wonder, because Panasonic has approved its cooling technology for other manufacturers.

The large sound system of the Panasonic JZW2004 was set up by Technics. Image: © Panasonic 2021

A special feature of the Panasonic flagship remains the lush Technics sound system on the back of the device. It now consists of height speakers, front speakers and, more recently, additional side speakers that bounce sound off the walls to enable Dolby Atmos sound only with the TV. Finally, Panasonic is also relying on HDMI 2.1 connections including eARC (HDMI-ARC for 3D sound such as Dolby Atmos), HFR (high frame rate, probably 120 Hertz with 4K resolution), VRR (variable refresh rate for gaming) and ALLM (automatic game mode).

On top of that, the input delay should be at a particularly low value of 14.4 milliseconds – with the predecessor it was 21.7 milliseconds. That means faster implementation of controller inputs on the television. The image processor is the "HCX Pro AI Processor", which analyzes content and optimizes it. That would run counter to Panasonic's claim to present content as intended by the creators. If you want, you can turn off such image improvements – the new OLED panels were also calibrated with the help of Hollywood color expert Stefan Sonnenfeld.

With "Soundscape Pro" the TV enables 3D sound even without a soundbar. Image: © Panasonic 2021

All HDR formats on board

As usual from Panasonic, all kinds of HDR formats are offered again: HDR10, HDR10 +, HLG (and HLG Photo) as well as Dolby Vision, Dolby Vision IQ and HDR10 + Adaptive. The television should be able to display all kinds of HDR content. Panasonic's "My Home Screen" platform is again used as the operating system. Recently, two Bluetooth devices like two headphones can be linked at the same time.

TCL launched the first mini LED TV on the market in 2020 with the X10. The TCL C825 appears to be a significant improvement in the way 4K writes films with reference to possibly inadvertently pre-published information from the TCL website. The TV uses the "OD Zero Mini LED" technology, where "OD" stands for "Optical Distance" and "Zero" stands for "zero". The small optical distance results from the design – the backlight is half the thickness of the previous year's model. According to the manufacturer, it is the "thinnest directly lit television of all time".

According to the manufacturer, the TCL C825 is said to be the thinnest LCD television with full array local dimming.

The TCL-TV has tens of thousands of mini-LEDs, which are divided into thousands of dimming zones. LG mentions 30,000 LED lamps and 2,500 dimming zones for its top-of-the-line mini-LED model, and the competitor may have a similar number. Samsung has not given any specific figures for the similar "Neo QLED" television . Thanks to mini-LED technology, LCD televisions are getting closer to OLED picture quality.

In Europe, the Panasonic JZ2000 will be available in 55 and 65 inches in summer 2021. Panasonic will deliver the complete TV range for 2021 as well as further information. Information on the price and release date of the TCL C825 is expected to be available at CES.