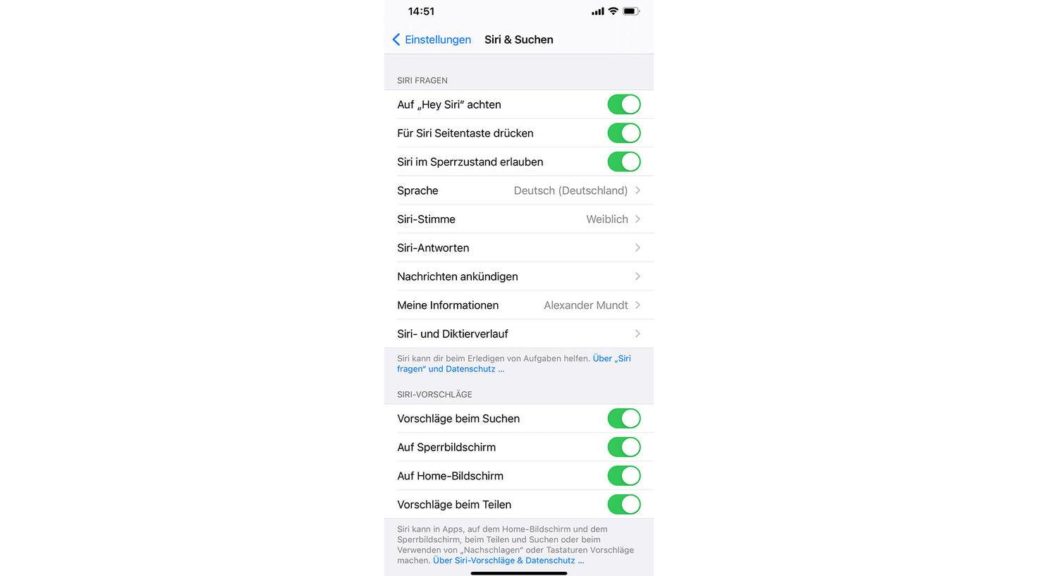 Apple has greatly improved its iPhone voice service Siri over the years – but not everyone wants to use voice control. We'll tell you how to deactivate Siri.

Siri is deeply integrated into the iPhone operating system iOS – even in the search suggestions. The artificial intelligence works a lot in the background and listens to your word – but not everyone wants that. For this reason, you can turn off the voice assistant's word and deactivate Siri.

As soon as you turn off the first two Siri options, a pop-up window will appear asking if you want to deactivate Siri. In this case, choose "Deactivate Siri" to switch off the voice service.

You can turn off all Siri features in the settings. Image: © Screenshot / Apple 2021

In this context, you should also deactivate the Siri suggestions. These are the notices based on artificial intelligence that appear when searching or on the lock screen, for example. If you enter something in the Spotlight search, Siri directly receives suggestions for the corresponding apps, based on previous usage, among other things.

If you don't want to deactivate the Siri suggestions completely, but only for individual apps, this is also possible.

Turn off Siri syncing with iCloud

Since Siri is constantly learning, data is also accessed across devices. Finally, Siri is synced with iCloud by default. You can prevent data access by switching off the synchronization.

If you want to use Siri again at a later point in time, no problem – you can switch the voice assistant back on in the twinkling of an eye in the settings of your iPhone. You may have to relearn speech recognition when you activate "Hey Siri" so that Siri can better distinguish your voice from others.