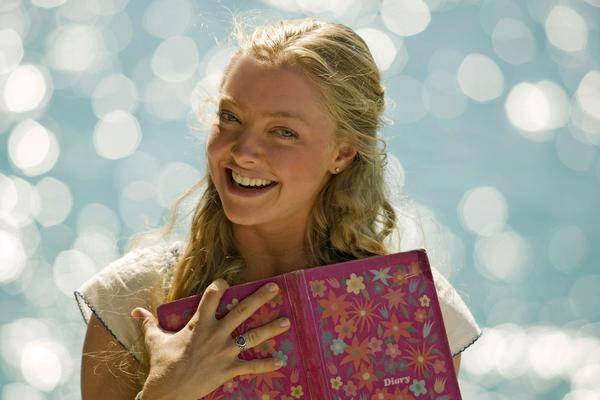 Musical films, comedies, sci-fi action hits or dramas by renowned directors: no matter what genre you have in mind, the chances are good that there is a suitable series or a suitable film with Amanda Seyfried. You can find a selection from the diverse filmography of the actress here.

The teen comedy "Girls Club" shows how funny a catfight can be in high school: Lindsay Lohan plays the 15-year-old protagonist Cady, who grew up in Africa and was tutored at home. After moving to the United States, however, the teenage girl is said to be going to school for the first time – and the pecking order there is tougher than in the wild. With the help of some outsiders, Cady makes it into the hippest but bitchy girl clique "Plastics". Until Cady clashes with leader Regina (Rachel McAdams) …

Amanda Seyfried became known worldwide with "Mamma Mia!". In the Abba musical film, she plays the newly engaged Sophie, who absolutely wants to be taken to the altar by her father. It's just stupid that Mama Donna (Meryl Streep) doesn't want to explain who Sophie's father is. Without further ado, the strong-willed young woman invites all three potential producers, whom she was able to identify with her mother's diary. When all three dad candidates actually show up, things go haywire.

In addition to Seyfried and Streep, Pierce Brosnan, Colin Firth and Stellan Skarsgård are among those involved in the film. In the sequel "Mamma Mia! Here We Go Again", singer Cher also appears as Sophie's grandma Ruby and also trills one of the world-famous Abba songs.

"In Time – your time is running out"

Amanda Seyfried can be seen in "In Time" alongside Justin Timberlake. Together they embody a kind of futuristic version of Bonnie and Clyde in the film.

The premise of the action-packed and socially critical sci-fi film is as simple as it is exciting: time is money – in the truest sense of the word. "In Time" takes place in a future where life is the new currency. From the age of 25 people no longer age, but a watch implanted in the arm relentlessly counts down the time remaining until death from this point on. Additional minutes and hours can be earned through work, while groceries and rent cost valuable time.

Protagonist Will (Timberlake) lives in the ghetto and has to learn the hard way what it means when the clock runs out. When a life-weary stranger gave him over a hundred years of life, Will is determined to use this time to fundamentally change society. The meeting with the rich Sylvia (Seyfried) and her father marks the beginning of a campaign against the system.

Another musical film with Amanda Seyfried is "Les Misérables". The film won three Oscars in 2013, including the award for best supporting actress. However, it does not go to Seyfried, but to her colleague Anne Hathaway.

The focus of the plot is the convict Jean Valjean (Hugh Jackman), who was released on parole in France in the 19th century. Valjean breaks his conditions and starts a new life under a false name. But the fugitive's love for poor Fantine (Anne Hathaway) becomes the fugitive's doom, and the relentless inspector Javert (Russell Crowe) is on his heels. Together with Fantine's daughter Cosette (Seyfried) Valjean has to flee again.

Occasionally, Amanda Seyfried returns to her comedy roots: In the hilarious sequel "Ted 2" by "Family Guy" creator Seth MacFarlane, she takes on the female lead. Seyfried and MacFarlane had previously shot the weird western comedy "A Million Ways to Die in the West" (2014) together.

Seyfried plays the attorney for the talking, smoking teddy bear Ted, who wants to have a child with his wife Tami-Lynn (Jessica Barth). Buddy John (Mark Wahlberg) will serve as the sperm donor – so far, so good. Unfortunately, Ted is legally not a person, but a thing. Starting a family does not seem possible. A fact that Ted, John and Samantha (Seyfried) want to change.

The dark drama by director Paul Schrader ("A man for certain hours") tells the story of a pastor (Ethan Hawke) who struggles with himself and his belief in God. The encounter with the pregnant Mary (Amanda Seyfried) only intensifies his doubts. Because Mary's husband is a radical environmental activist and he firmly believes that no child should be born into our broken world.

Climate change, criticism of capitalism and fear of the future are central themes in Schrader's moving film. The filmmaker was even nominated for an Oscar in 2019 for the associated script.

Around 25 years after the original series, David Lynch and Mark Frost deliver a mini-series with "Twin Peaks: The Return", which also serves as the third season. Original actor Kyle MacLachlan returns once more to the eponymous small town as Agent Dale Cooper – and it still holds numerous secrets.

"Twin Peaks" newcomer Amanda Seyfried can only be seen in a handful of scenes, but she still makes a memorable appearance in the series. Her character Becky Burnett has a toxic relationship with her drug addict husband Steven (Caleb Landry Jones) – and is strikingly reminiscent of the former murder victim Laura Palmer (Sheryl Lee), whose case Dale Cooper brought up at the time …

"Enzo and the wondrous world of people"

The family drama is one of those films in which the critics and other viewers are completely at odds: On the rating portal Rotten Tomatoes , "Enzo and the wondrous world of people" received a bitter 43 percent gossip from professional reviewers. The audience score, on the other hand, is a whopping 96 percent positive reviews!

And that's what it's all about: Enzo the dog talks about his life at the side of his master, racing driver Denny (Milo Ventimiglia). From the four-legged friend's first encounter with the Formula 1 driver, to Denny's love story with his wife Eve (Seyfried) and the birth of their child, to strokes of fate, Enzo reports on "the wondrous world of people".

David Fincher's black and white film on Netflix actually focuses on screenwriter Herman J. Mankiewicz and his writing process for Orson Welles' "Citizen Kane". Nevertheless, many industry experts certify Amanda Seyfried for her performance as actress Marion Davies a good chance of an Oscar. And the "Mank" supporting actress definitely deserved it: The shooting of Davies' introductory scene took eight days, as Seyfried reveals in an interview with Collider .

As already mentioned at the beginning, Fincher's drama tells the story of Herman J. "Mank" Mankiewicz, who gambled away his reputation as an important Hollywood author due to his alcohol addiction. The script for "Citizen Kane" seems like a chance to turn things around again. But there is a dispute between Mank and director Orson Welles and the screenwriter also has some other bills open with the dream factory of the 1930s …