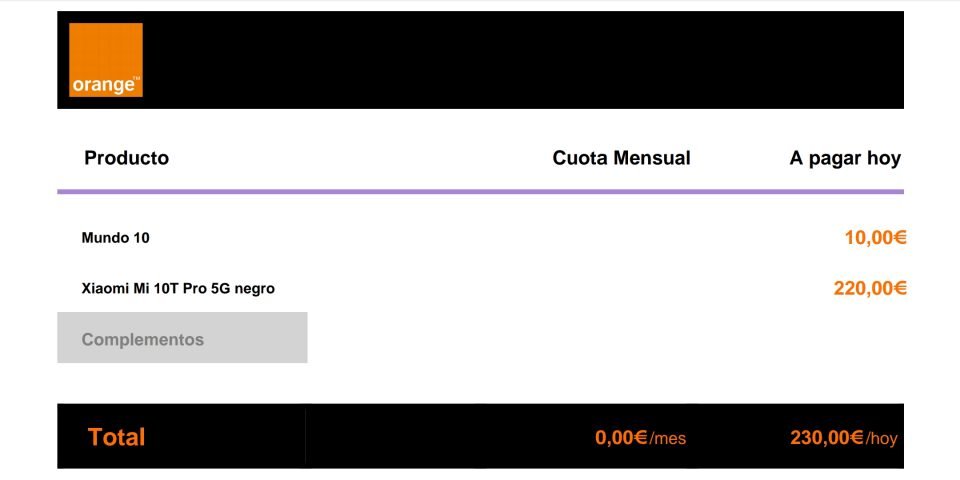 Today we are going to echo a controversy that arises as a result of several chain errors and mismanagement of a company. Specifically, hundreds of users have once again been victims of the abusive practices of a company , this time it is the telecommunications company Orange .

Unfortunately, it is very common to hear about consumer abuses perpetrated by companies that, taking advantage of their power , and believing that they are above the law, carry out this type of practice . That is why we are also going to use our power from here, but to denounce this fact and with the hope that the laws will be increasingly harsh in these cases.

Orange and its malpractice

To put you in context, a little more than a week ago the Mi 10T Pro in black with a configuration of 8GB of RAM and 128GB of storage appeared on the Orange website for several days . This offer was achieved by hiring a prepaid mobile rate , exactly the so-called Mundo 10, and adding the terminal in that contract.

Specifically, you selected that rate, you chose the Mi 10T Pro that appeared at a price of € 220 , you filled in your personal data, you selected the delivery method between store, Post Office or courier. Then you accepted the contract and then you made the payment by card via the web.

They then confirmed that your order has been correctly placed and gave you an order number, in addition to sending you all the details by email along with the order confirmation in a pdf , where everything contracted is detailed.

Next, you would put your order number on a page that they have specific for tracking purposes, and it would notify you that the order was being processed and that in less than 48 hours you would receive an SMS or email with a new tracking number.

Orders that do not arrive and poor customer service

So far so good, until after 48 hours there were no sms or emails , in addition to those who called his attention number (1470) they gave different answers . In my case the answer I got was that being a high next to a device could took 4 to 7 days to process, and that in case of error they would help me either handing me back the money or the ability to re-do the same order at the same price I paid … nothing is further from the truth … 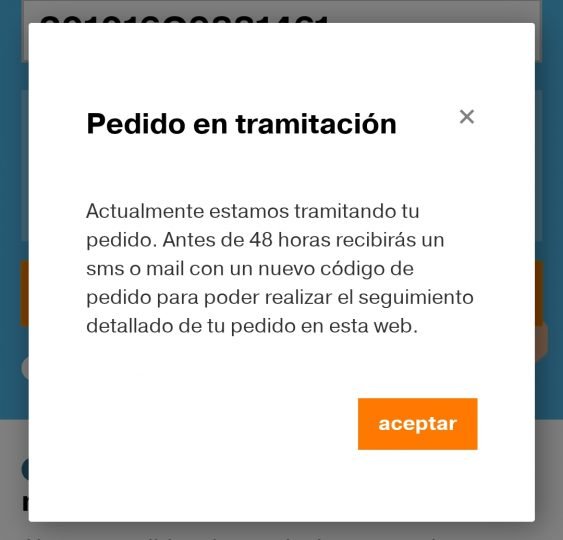 As for others, the answers they were given were varied, from price errors to scoring or, what is the same, that the orders did not pass the financial filter , which is illogical as they are not financing or a monthly contract , among other answers, which are nothing more than excuses for not taking responsibility for their mistakes.

And it is until today when they have agreed to give an answer in unison to all those who contacted them through their different support channels, an answer that of course is the best excuse that has occurred to them after days thinking that tell us, but that with her they have backfired .

Price for "limited" units and cancellations

In detail, those who hired the prepaid rate together with the Mi 10T Pro found an answer that, far from providing a solution that of course it did not, could also have consequences for Orange . Specifically, they said they would proceed to cancel the orders because the price was only for limited units and when the orders were processed those units had already been shipped.

Of course, this explanation was not accepted by anyone, since at first nowhere was it specified that it was a special price for limited units . In addition to the fact that if there were no units left at that price, it should have been reflected on the web , either indicating that there is no stock or showing the normal price, which did not happen and it was possible to place the order at the indicated price of € 220 , as it is stated in the bank movements and in the order confirmation email. 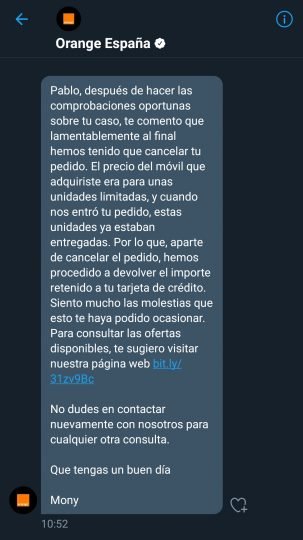 And above all, if that was not enough, they unilaterally cancel all orders in a chain, without previously contacting customers or notifying them or giving them a solution such as waiting until stock is replenished, offering a device with similar characteristics or ultimately a refund. But unfortunately they neither did that nor did they notify of the cancellation and only those who had previously contacted Orange in its support service found out about it. 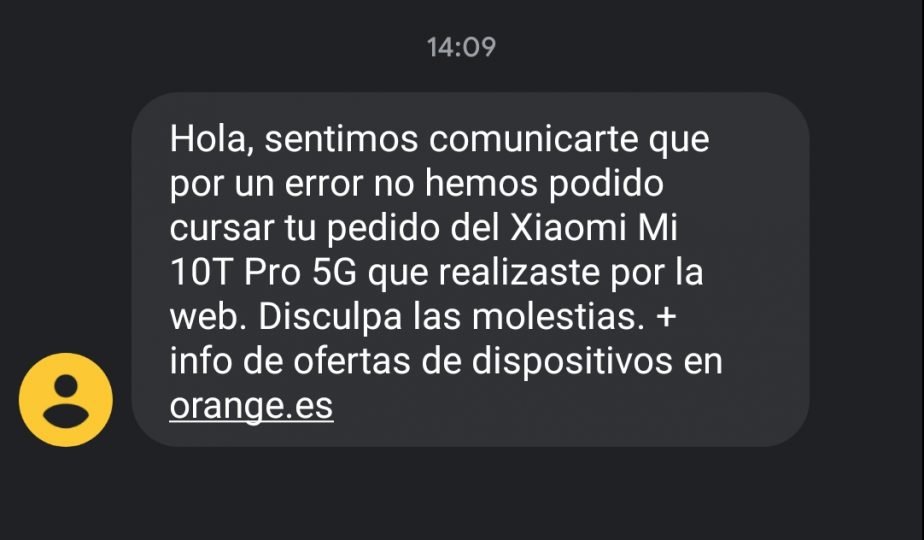 A few hours ago they sent an SMS informing that due to an error they had to cancel the orders, although they do not specify what this error consists of. Taking advantage of this update, it should be noted that there are still people who have not received the refund and they have not received any sms either.

Additionally, I have another dispute with Orange about a return of a terminal that they supposedly sold "new" and the non-return of my money , in which they always reply that in 30 days I will receive it and after that time they answer me the same thing.

I would like to take this opportunity to show another abuse among so many that companies like Orange do, and emphasize that to this day I still do not have my money, having already spent 6 months since I returned the terminal, which came to me unsealed and with damage .

Assert your rights as a consumer

From XIAOMIADICTOS we encourage you to claim to at least make this type of event occur less and less, you have several ways to do it , either by approaching a physical Orange store , or online from the comfort of your home in the different organizations that fight for the consumer such as OCU or Facua . In addition, you can also file a claim with Confianza Online , a service to which Orange is attached and which will make your claims more relevant .

We hope that this helps to see justice done and that more and more consumers have the power they should have had from the beginning. Much encouragement to all.