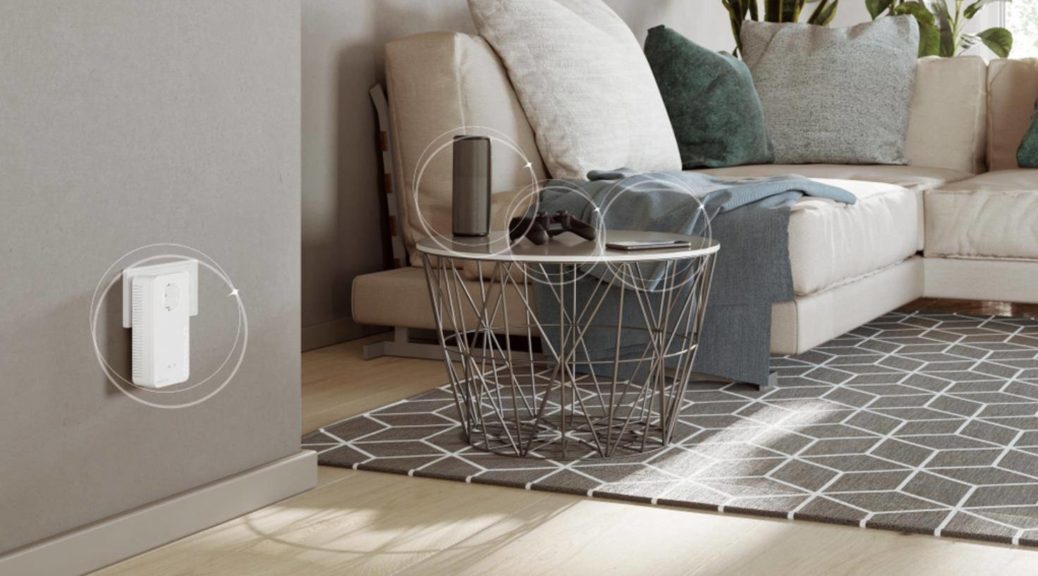 Powerline technology offers the possibility of providing even larger houses or apartments with stable WiFi across the board. Using the example of the Devolo Magic 2 WiFi next, we show how this works.

Keeping an entire house or larger apartment consistently supplying a good internet signal can be a challenge. Background: The choice of location for the Internet router is very limited in most households. The router is usually located where the Internet comes into the house or apartment – either on the telephone connection or on the socket for the TV cable. But only in the rarest of cases is this space really optimal for Internet signal distribution.

Now you have two options: Either you lay LAN cables from the router to all rooms in which you need an Internet connection. Or you can rely entirely on the WiFi signal from your router.

Laying cables is often structurally difficult or can only be managed with great effort. In turn, WLAN signals often have to deal with sources of interference in everyday life. This is usually not a problem in smaller apartments, but the signal strength can suffer significantly with larger living spaces or several floors. If your favorite place for surfing with a tablet or smartphone is at the other end of the apartment or even on a different floor than the router, there is often not much left of the WiFi signal.

In this case you could amplify the wireless signal via repeaters. The catch with WiFi repeaters: They only extend the range of a signal that may have previously been weakened by walls and other obstacles. In rooms that are very far away from the router, not much often arrives.

Together with Devolo we are giving away two multiroom packages of the Devolo Magic 2 WiFi next adapter. Take a look at our video and tell us in the YouTube comments what your favorite WiFi spot is.

This is how Powerline technology works

In such cases, the best solution is often powerline systems such as the Devolo Magic 2 WiFi next. Powerline technology uses the power grid in the house to distribute the internet signal, i.e. the internet comes from the socket. Every socket in the house can thus become its own LAN access point and WLAN hotspot.

The Powerline adapters are plugged directly into the socket. Image: © Devolo 2020

All you need is the appropriate Devolo adapter. They are plugged into any socket in the house and can thus transport the Internet signals to the respective room. You can then either use the adapter's WiFi signal to surf wirelessly or connect a LAN cable to the adapter.

A set of the Devolo Magic 2 WiFi next includes a LAN adapter that you plug into a free socket near the router and connect to the router using the LAN cable provided. The adapter ensures that the router's internet signal is fed into the domestic power grid.

A Magic-2-WiFi-next-Kit consists of a LAN adapter and at least one WiFi adapter. Image: © Devolo 2020

Depending on the size of the set, the package also includes one or two WiFi-next adapters. You place these at suitable sockets in the rooms or parts of the house where you need a LAN connection or a WLAN access point.

The connection between the LAN adapter on the router and the adapters in other rooms should then be established automatically. As soon as the little light with the house on all adapters lights up permanently white, the connection is established. Now you can connect up to two LAN cables to each of the adapters and use them to supply laptops and computers in the respective rooms with a fast Internet connection.

In the next step, you have to combine the individual adapters to form a comprehensive network of local WiFi hotspots.

Important : The adapters do not belong in a multiple socket, but directly in the wall. Otherwise the signal quality will be impaired.

Set up mesh WiFi via Magic 2 WiFi next

The adapters of modern powerline sets such as the Magic 2 WiFi next also serve as access points to the router's WiFi in the rooms in which they are installed. You can use Powerline to equip every floor of a house with its own WiFi access point and thus ensure consistently good signal quality everywhere.

In the case of the Devolo Magic 2 WiFi next, it transmits in the 2.4 or 5 GHz frequency band. The integrated "Band Steering" ensures that all WLAN clients are assigned the optimal frequency band. Instead of the often overcrowded 2.4 GHz band, the end devices then automatically transmit in the 5 GHz band. According to the manufacturer, data rates of up to 867 Mbit / s can be achieved via WLAN-ac. This is the current WLAN standard that all routers support.

All connected adapters form a so-called mesh network. This means: The network automatically assigns the access point with the best signal strength to each end device. For example, if you move around your house with your smartphone from the basement to the attic, the mobile phone's WiFi connection will always switch to the access point that is closest to you – automatically and without any disconnections.

Meh-WLAN ensures even coverage of the entire house with Wi-Fi signals. Image: © Devolo 2020

To use the Magic 2 WiFi next to set up a mesh WiFi that covers your entire home and every favorite place, proceed as follows:

In the Devolo app, tap on one of the WiFi adapters. Image: © Devolo / Screenshot 2020

Start the configuration and then press the WPS button on your router. Image: © Devolo / Screenshot 2020

Now the Magic-2-WiFi-next adapter and the router are connected to a common WiFi network, which ideally also supplies the last corner of your house or apartment with fast internet – and thus also the one favorite place where you are Always struggled with a bad network before.