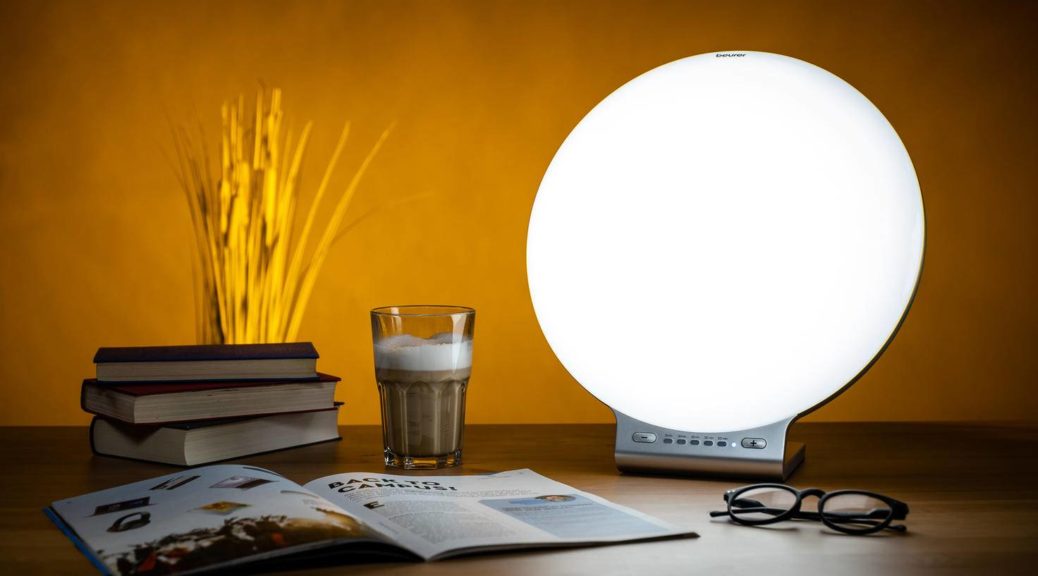 It started again at the beginning of October: I found it harder and harder to get out of bed in the morning, could hardly get myself up to jog and generally felt a little lacking in energy and drive. But this year I wanted to cheat the autumn and winter blues – with a daylight lamp. You can find out how well that worked in my test.

To drive away the autumn blues, I used the TL 100 daylight lamp from Beurer for a week. It simulates sunlight with a light intensity of 10,000 lux in order to scare away the gloomy side effects of the dark season. The LED lamp can also be used as a mood light.

How do daylight lamps work

Before we continue with the test, we should briefly look at how daylight lamps work. In autumn and winter the days get shorter, the sun is less visible. This depresses the mood of many people and manifests itself as imbalance, listlessness and fatigue, we then speak of a winter depression.

Daylight lamps, also called light showers, are said to alleviate such complaints by emitting light that mimics natural daylight. This is helpful for two reasons: The light from the lamps increases the release of the "happiness hormone" serotonin and can thus lighten the mood. At the same time, it lowers the production of the sleep hormone melatonin, which is released more when there is a lack of light.

Daylight lamps like the Beurer TL 100 are often reminiscent of the sun. Image:

Less from behind … Image:

A daylight lamp is not a substitute for a specialist examination and, if necessary, treatment. If you suffer from persistent depression and listlessness that doesn't just occur in late autumn or winter, you should seek professional help. Anyone suffering from an eye disease should consult with their doctor before using a daylight lamp.

Daylight lamp: duration and distance from the face

So, and now it's a good week back in time, my one-week test of the Beurer TL 100 begins. According to the instructions for use, the application is most effective if I do it seven days in a row in the morning hours. That is exactly my plan. The practical thing: I can also use the daylight lamp during work. This is a good idea in the home office anyway. I raise the lamp on a chair next to my kitchen table, which has been converted into a desk. The distance between the face and the lamp should be ten to 40 centimeters. Important: The further away you sit from the daylight lamp, the lower the illuminance and the longer the recommended duration of use.

Ideal for the home office: I do light therapy on the side. Image:

Before using it for the first time, I researched whether I could use the daylight lamp when I was wearing my glasses. Apparently no problem. The effect is only weakened if the glasses are tinted. The same goes for contact lenses. The effect of the light only unfolds when it hits the retina.

However, that does not mean that you should look into the light continuously while using it. This can overstrain the retina. It is enough to briefly look into the light again and again. At the same time I work on my laptop. According to the manufacturer, I don't have to worry about UV light. The Beurer TL 100 is an LED lamp whose infrared and UV values should be so low, according to Beuter, that they cannot damage the skin and eyes.

The daylight lamp from Beurer is based on the appearance of the sun with its round design. There is a timer on the stable base that I can set from 15 to 120 minutes. On the top of the lampshade is the on / off button in the middle, to the right of it there are two buttons to dim the light brighter and darker.

The Beurer TL 100 has a lighting surface with a diameter of 33 centimeters. Image:

The lamp in the side view. Image:

The timer can be set in 15-minute steps. Image:

The power button is located above the lamp. Image:

The brightness can also be set here. Image:

Difference between brightness and illuminance

The application itself is pleasant, and since I work on the side, the half hour went by in no time. I set the runtime via the app. When it has expired, the daylight lamp switches off automatically.

I'm a bit sensitive to the brightness. I almost turn it down to the lowest level, then turn it up a little over the course of the week. According to Beurer, the brightness should be pleasant to the eye. The brightness level and illuminance have nothing to do with each other, the brightness has no influence on the effectiveness.

I adjust the brightness so that the light does not disturb me when I work. Image:

The level of illumination varies depending on how close you are to the lamp. It is a full 10,000 lux at a distance of ten centimeters, at 40 centimeters it is only 2,500, so the recommended duration of use increases accordingly. For comparison: According to the Federal Office for Radiation Protection, there is 20,000 lux on an overcast summer day, office lighting comes to 500 lux.

A light goes on: The LightUp app

I can make all the settings on the lamp or using the Beurers app LightUp. The application is available for iOS and Android, smartphone and lamp connect via Bluetooth. The content of the LightUp app is very reduced, but absolutely sufficient. I can turn on the lamp, adjust the light intensity and set a timer. The lamp should actually remember my brightness setting for the next time, but that didn't work in the test.

The app also offers the option of using the TL 100 as a mood light – with ten settings from "forest" to "action" to "rainbow". Without the app, the mood light starts after a long press on the power button. Maybe incidental to the test, but the mood light is a nice gimmick. The colors are a bit too bright for me, I'm a fan of warm light.

A light show in purple … Image:

… or green creates the mood. Image:

And how do I feel after a week with the daylight lamp? Well. An additional light source is pleasant on the cloudy autumn mornings, I actually have the feeling that I am more alert and motivated at work and that I can shake off the residual tiredness more quickly. Above all, it is nice that I can use the lamp while working and don't have to concentrate on it.

Good mood: is it the book or the daylight lamp? Image:

At the weekend the light shower even had something meditative about it. I switched the lamp on as soon as I woke up and read with a cup of tea on the bedside table. That was a nice, relaxed start to the day and it "forced" me to take time for myself. A really nice side effect of the daylight lamp. And I actually jogged twice during the test week. A success.

I can only recommend the daylight lamp to people with slight listlessness: It actually lightened my mood, I was more motivated at work during the test week, I got up to sport and started the day even more relaxed than usual at the weekend. And that without investing a lot of time, I was able to use the lamp on the side. Now when winter comes and the days get even shorter, I will definitely use the daylight lamp more often to brighten up everyday life and my mood a little.