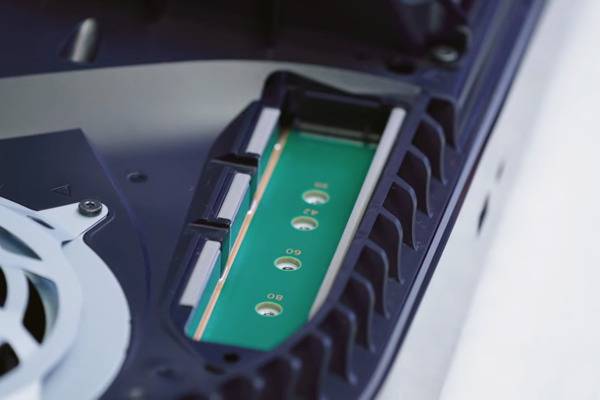 In yesterday's teardown video of the PS5, we learned some interesting things about the console's cooling system: It has a large fan, an even larger heat sink, and liquid metal as a thermal interface material. The video also reveals details about the storage expansion: The PS5 supports NVMe SSDs in various formats.

To get to the M.2 slot for NVMe storage, users don't even have to go inside the PS5. It is enough to remove the outer shell and unscrew a narrow metal cover. Then the elongated green memory slot appears, into which NVMe bars of different lengths fit. The installation of additional memory takes a little longer than with the Xbox Series X, in which only a proprietary memory card has to be inserted in the back, but PS5 owners can save a little money.

Sony had bad experiences with proprietary memory with the PS Vita. Instead of using normal microSD cards, the memory of the PS Vita had to be expanded with special memory cards from Sony, which are significantly more expensive than normal microSD cards. That was one of the reasons Sony's handheld never really took off. The Japanese company seems to have learned its lesson, the M.2 slot on the PS5 supports NVMe SSDs from various manufacturers.

PS5 owners will therefore be able to expand the memory of their console more cheaply than Xbox gamers. The special memory cards from Seagate for the Series X with a capacity of 1 terabyte will cost 220 dollars (just under 190 euros). Depending on the manufacturer, size and speed, NVMe SSDs are sometimes significantly cheaper. If you need 500 GB of additional storage, you can find NVMe modules from 50 euros. Some manufacturers offer 1 TB from just under 100 euros.

However, the question arises whether the NVMe SSDs can keep up with the speed of the internal PS5 SSD. Microsoft states that the memory cards for the Xbox Series X and S are just as fast as the internal hard drive . Whether Sony can do this with some (or all) supported memory expansions will be shown after the console is released.