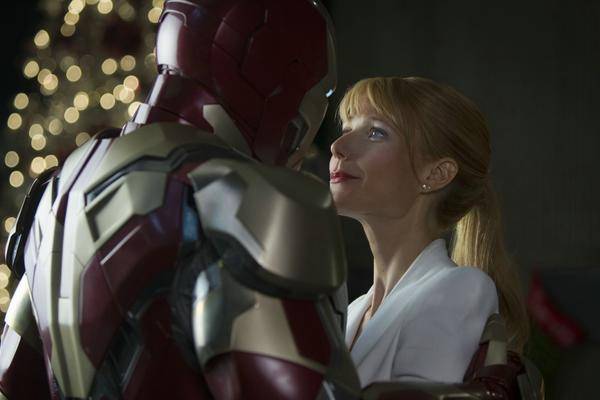 Gwyneth Paltrow is an entrepreneur, model, singer, activist and – oh yes – an actress, too. The Oscar winner has already starred in over 40 films and has also appeared in TV productions several times over the years. You can read here which of these series and films with Gwyneth Paltrow deserve a place on your watchlist.

In David Fincher's nerve-wracking thriller, a disaffected older detective ( Morgan Freeman ) and his ambitious young successor ( Brad Pitt ) chase a serial killer who leans his murders on the seven deadly sins. Gwyneth Paltrow plays the younger cop's angelic, pregnant wife. Above all, it's her character that gives the film its emotional impact.

In real life, Gwyneth Paltrow was also in a relationship with her co-star Brad Pitt for three years, and the actors even got engaged. In 1997, however, the couple separated.

Long before Anya Taylor-Joy slips into the role of the wealthy matchmaker out of passion for the remake of the same name in 2020, Gwyneth Paltrow plays the title role in the Jane Austen film adaptation "Emma".

In it, the well-off young Emma sets her mind on finding a good match for her friend Harriet (Toni Collette) – and thus triggers a complete chaos of relationships and emotions, in the course of which the heroine herself loses her heart.

Anyone who remakes a Hitchcock thriller can really only fail. Director Andrew Davis dares to do it anyway and, to be on the safe side, signs the two Hollywood stars Michael Douglas and Gwyneth Paltrow for his film. The result is quite entertaining, but does not match the tension in Hitchcock's "Bei Call Mord".

The plot is simple: the wealthy entrepreneur Steven Taylor (Douglas) finds out that his young wife Emily Bradford Taylor is cheating on him with the painter David Shaw (Viggo Mortensen). In order to get revenge on Emily and at the same time to get the fortune of the millionaire heiress, the unscrupulous Steven hires the blackmailable David of all people to kill Emily. But the murder does not go as smoothly as planned …

Julia Roberts and Daniel Day-Lewis almost played the main characters in "Shakespeare in Love" and the film turned out to be a maudlin melodrama. Yes – luckily! – everything turns out differently: The script is being revised, "Shakespeare in Love" becomes a romantic comedy. Gwyneth Paltrow and Joseph Fiennes receive the leading roles – and Paltrow for their performance an Oscar for "Best Actress".

The story: The young William Shakespeare (Fiennes) is supposed to write a new play, but writer's block throws him a spanner in the works. When he meets the beautiful Lady Viola (Paltrow) and falls head over heels in love with her, inspiration returns: the planned piece "Romeo and Ethel, the pirate's daughter" becomes "Romeo and Juliet". The real drama, however, takes place behind the scenes, because Viola wants to become an actress – in 1593 still a purely male profession – and to make matters worse, she has been promised to another man.

"The talented Mr. Ripley" is beautifully staged, full of tension and with a spectacular cast. Gwyneth Paltrow plays the friend of Jude Law's character in the thriller, and the cast also includes Matt Damon , Cate Blanchett and Philip Seymour Hoffman .

Matt Damon takes center stage as poor artist Tom Ripley. He is commissioned to bring the son of a wealthy businessman named Dickie (Law) back to New York. So Tom sets off for Italy, where Dickie and his girlfriend Marge (Paltrow) enjoy the "Dolce Vita". Dickie takes the stranger in without further ado – not realizing that Tom would like to lead Dickie's life himself.

Gwyneth Paltrow proves that she has something on the box not only as an actress but also as a singer with her guest appearances in the musical series "Glee". Paltrow even earned an Emmy for her performance as a cool substitute teacher Holly Holiday.

The foundation stone for the Marvel Cinematic Universe was laid with "Iron Man" in 2008 – and Gwyneth Paltrow played her part. As Tony Stark's great love, Pepper Potts, she can be seen in a total of seven Marvel films. After her debut in "Iron Man", Paltrow returned for "Iron Man 2", "Marvel's The Avengers", "Iron Man 3", "Spider-Man: Homecoming", "Avengers: Infinity War" and "Avengers: Endgame" as Pepper back.

In the (so far) final avenger blockbuster, Paltrow's character was even allowed to slip into the hero suit and fight side by side with her husband against the army of chief villain Thanos.

Granted, Gwyneth Paltrow isn't allowed to be involved in Steven Soderbergh's film about a global pandemic for long, but her role is undoubtedly one of the most important. After all, she plays the so-called "patient 0" in the thriller. A film that couldn't be more topical!

When Beth (Paltrow), the wife of Mitch Emhoff (Matt Damon), returns from a business trip, she suffers from a fever and coughing fits. A little later she dies in the hospital. And that's just the beginning, because a deadly virus is spreading rapidly. Mass panic, hamster purchases, and looting are just some of the consequences as scientists desperately seek a vaccine.

"Thanks for Sharing – Addicted to Sex"

Aside from the Marvel Cinematic Universe, it gets ridiculously romantic for "Avengers" co-stars Gwyneth Paltrow and Mark Ruffalo in the movie "Thanks for Sharing". Singer Pink can also be seen in her first major film role.

Mark Ruffalo plays one of four sex addicts who meet in a self-help group. Adam (Ruffalo) is in love with Phoebe (Paltrow), but doesn't dare to tell her about his addiction. And the other members of the troop also have to carry their packages.

After the detour to "Glee", Gwyneth Paltrow will take on a recurring TV role in the Netflix series "The Politician" in 2019. As the creator of the dramedy, Ryan Murphy is responsible, among others, who has already achieved successes like – surprise! – "Glee" and "American Crime Story" can claim for themselves.

Student Payton (Ben Platt) is aiming for a political career and wants to become US President. First of all, however, you have to get through high school – and it offers at least as many power games and intrigues as the political arena.