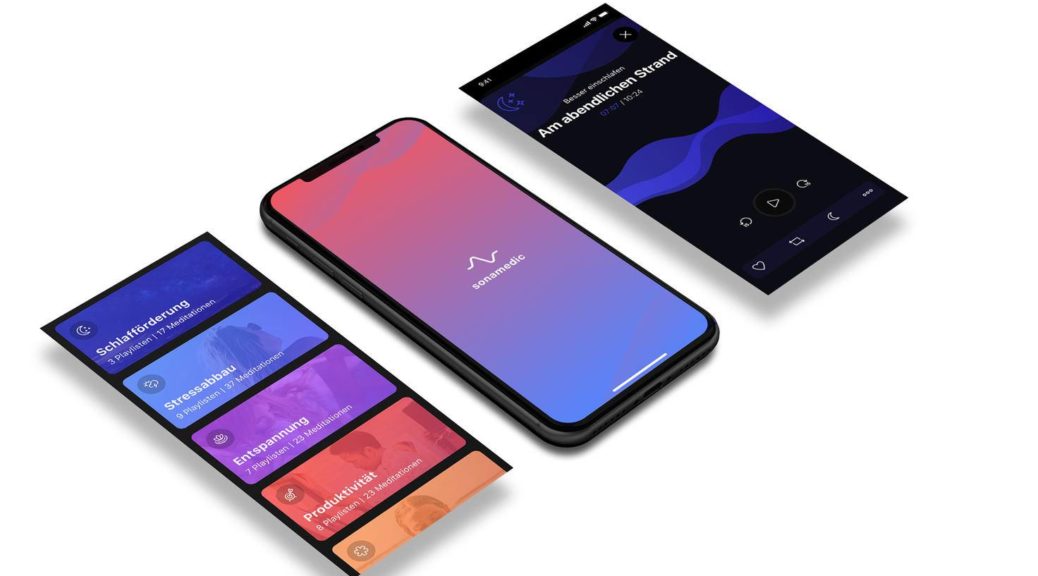 Calm, Headspace, 7Mind and many more: If you want to download a meditation app, there are a variety of offers. The German start-up Sonamedic sends its own application to relax in the race, the app of the same name wants to stand out from the competition with so-called binaural beats. I've checked them out.

Particularly interesting for me: The manufacturer promises that its method will quickly have a positive effect on meditation beginners. I am no longer an absolute newbie, but I sometimes find it difficult to find my way into meditation. That is why it appeals to me particularly when Sonamedic advertises that meditation is "as easy as listening to music" with the app.

The structure of the app is clear, the content is organized on a dashboard. There is a short introduction and the areas "Relaxation", "Productivity", "Stress Relief", "Health" and "Sleep Promotion", each with a free meditation of around ten minutes.

This is a bit meager compared to other apps. Most competitors include a one-week basic course even without a subscription. If you take out a subscription, the range of the Sonamedic app is more extensive. There are then 14 to 21 meditations per area, which are thematically summarized in playlists such as "Inner Balance" and "Motivation".

The meditations and sound journeys are designed very harmoniously. They combine a pleasant narrator's voice with suitable background music, as I know it from other apps. The specialty of Sonamedic that binaural beats are used for the music is not immediately audible. High time to find out what is actually behind it!

The imaginary tone: what are binaural beats?

Binaural beats are created when tones at slightly different pitches are played simultaneously in the left and right ears. This works best with headphones. To make up for the difference, the brain creates a pulsating tone that averages the two frequencies. These are the binaural beats.

An example: A tone with a frequency of 440 Hertz is played on the left, a tone with 430 Hertz on the right. From this the brain creates a sound with an average value of 435 Hertz. However, this "imaginary tone" is an acoustic illusion and cannot be heard by anyone else. A binaural tone is only created if the difference between the tones played on the left and right is no more than 30 Hertz.

The German physicist and meteorologist Heinrich Wilhelm Dove discovered binaural beats as early as 1839. According to Sonamedic, various studies have proven their positive effects on health.

Sonamedic uses the beats as sound therapy to stimulate the brain waves in a positive way and thus promote relaxation, sleep and concentration. The app uses sine tones to generate the beats. They sound like a continuous beeping on their own and are therefore not very relaxing. For this reason, the binaural beats in the meditations are underlaid with natural sounds and / or musical compositions.

That sounds promising. So I put on the headphones and listened to various meditations in the app. The sobering news at the beginning: I initially didn't notice the binaural beats. But you shouldn't do that either. Music, nature sounds and the narrator's voice overlay the sound. Since the developers apparently foresaw that some users would still want to hear the sound, they have taken precautions:

With each meditation you can choose whether you want to play it normally with speech and music, only with music or only with speech. Only with speech means you only hear the speaker and the binaural beats. I had to concentrate a little before I could hear the sound. It's a lot more subtle than I expected. According to the Sonamedic makers, everyone perceives binaural beats differently: either not at all or in the form of a humming sound. I perceive a kind of vibration that I feel a little uncomfortable after a while. So it makes sense to embed the binaural beats in the guided meditations with music.

Sonamedic app: better than the competition?

"Meditation – As easy as listening to music" – that is what the meditation app promises. But can she keep this promise? It's hard to answer. In my case, the meditation worked neither better nor worse than with comparable apps without binaural beats. Or let's put it this way: at least I consciously didn't notice any difference. As I know from my experience, meditation works sometimes better, sometimes worse, depending on the daily form, external factors and what else can play a role. It's a very individual thing. It is also possible that the binaural beats only develop their full effect when you have heard them for a long time.

What is certain is that the mixture of meditations, music and narrative voices at Sonamedic is very successful and can help you relax and focus. The start-up from the Black Forest can easily compete with competitors such as the Calm app from the USA. There is room for improvement in terms of scope, but the existing content is solid and should be constantly expanded.

Conclusion: worth a try

I find the approach of the Sonamedic makers with the integration of binaural beats in meditations very successful. Everything that contributes to more deceleration and relaxation is good. For me, the application worked just as well as conventional meditation apps. Unfortunately, it is difficult to evaluate the effect of the binaural beats. Even if they weren't included, I would be very pleased with the app. It combines a beautiful, simple design with successful meditations. As with the competition, however, the app is only really worthwhile if you take out a subscription.

The Sonamedic app is free for iOS in the App Store and for Android on Google Play . The full scope of the application is only available with a paid subscription. It costs 9.99 per month, 24.99 per quarter or 74.99 euros per year.