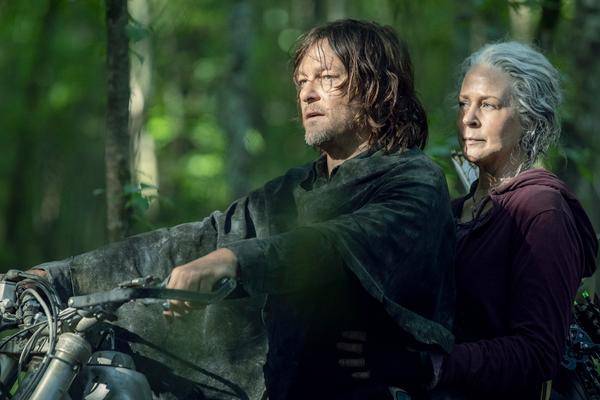 Shock for all "The Walking Dead" fans! As US broadcaster AMC announced, the popular zombie series will come to an end after season 11. This causes horror among the supporters, but at least there are some consolations.

Because, "The Walking Dead" will be with the fans for many years to come! Just last year, US network AMC has stated that the series for the fans, despite the comic end will be continued . Now it is said: After season 11, the end is in the area. The station will announce this during New York Comic-Con on Wednesday evening, as reported by The Hollywood Reporter , among others.

30 more episodes, then it's over for good

The fans certainly did not expect that. Especially not after the first information at Comic-Con that season 11 will be broadcast with more episodes than before. The final "The Walking Dead" season should include a full 24 episodes. Usually there are 16 episodes. But that also means: After the finale of season 10, which runs on October 5, there are only the six extra episodes and season 11. That makes only 30 more to follow before fans finally have to say goodbye. It should be so far at the end of 2022 …

Caryl get their own series!

AMC also has some good news for the fans: They confirm that Lauren Cohan will definitely return as Maggie for season 11 . What's more, the end of the main series doesn't mean the end of the entire franchise. But on the contrary. AMC wants to expand the "The Walking Dead" universe even further.

The two fan favorites Daryl (Norman Reedus) and Carol (Melissa McBride) get their own spin-off series – it would be the third after "Fear the Walking Dead" and "The Walking Dead: World Beyond". According to the current plan, the series could be broadcast in 2023.

Additionally, former "TWD" showrunner and now AMC's Chief Content Officer, Scott M. Gimple, is working on a format called "Tales of the Walking Dead". An anthology series is planned in which each episode is dedicated to a new or already known character.

"We still have some exciting stories to tell in 'The Walking Dead'," explains Gimple at Comic-Con. "And then the end will be the beginning of even more 'Walking Dead' – brand new stories and characters, familiar faces and places, new voices and new mythologies. It will be a great finale that will lead to new premieres. Evolution is ours . 'The Walking Dead' will live on! "

AMC is working hard on replenishment

So: yes, "The Walking Dead" will probably come to an end in 2022 – but the franchise won't end there. "Fear the Walking Dead" is to be continued for the time being and with a series about Carol and Daryl another spin-off series is in the starting blocks. And don't forget: three movies with Rick Grimes are still in the works. "The Walking Dead" fans will not have to do without supplies that quickly – even if it is certainly only a small consolation.