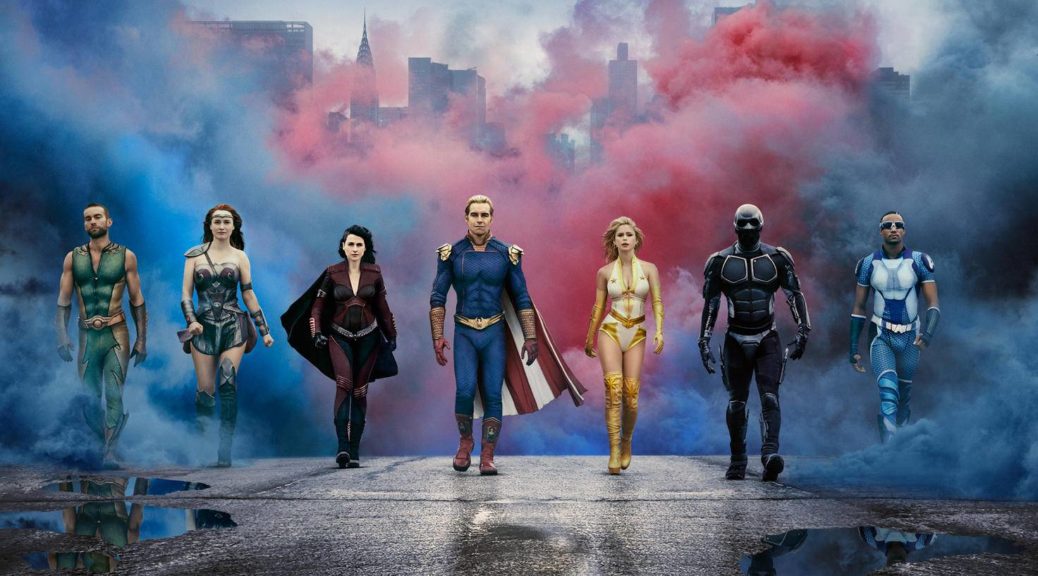 The Boys are back in town – and with Season 2 back on Amazon Prime Video. Admittedly, I was skeptical: Can the new episodes top the great first season? Since I've already seen the new season, here's the answer.

In the following, I'll leave out important story details about Season 2. After all, you should enjoy the eight new episodes without spoilers. However, I can't avoid details about the first "The Boys" season. So you read on at your own risk.

I celebrated the first "The Boys" season very much. This whole DC and Marvel superhero song was getting too much for me – Eric Kripke's series came at just the right time. So I was all the more excited about the sequel, and in the meantime even read the first two comic volumes of the Merciless Edition. The skepticism remained: Can season 2 build on the first and maintain the level?

What is The Deep doing in this picture? Image: © Amazon.com Inc., or its affiliates 2020

That's what the second season of "The Boys" is about

The answer is: it can! What's more, season 2 is even better than the first in my opinion. But first quick and dirty – just like the series – a rough summary of what the new episodes of "The Boys" are about.

Billy Butcher is missing, the other boys are on their own. Meanwhile, Hughie, Frenchie, Mother's Milk and Kimiko alias the female try to take on the Seven on their own.

After the death of Madelyn Stillwell, Stan Edgar took the reins at Vought International and is responsible for marketing the superheroes and above all the Seven. In season 2, however, he can also grapple with the danger of super terrorists …

After The Deep was exiled at the end of season 1, there is a new addition for the Seven in season 2: Stormfront supports the popular Supes, but they quickly offend their new colleagues. She doesn't like to stick to the rules and prefers to be her own boss – much to Homelander's displeasure. The leader of the Seven loves control and doesn’t let the others go over his mouth. So there are enough aspects that create potential for conflict in the second "The Boys" season.

If we look at the two seasons in direct comparison, the first season looks like an introduction. It establishes the characters and shows what "The Boys" is about. But it really only goes in depth with season 2. Showrunner Eric Kripke manages to let several storylines run parallel without losing the thread. In addition, each character continues to develop. With some characters like Kimiko we learn more about their background, with others we hold our breath for a moment because they suddenly show features that we would not have expected – for example with Billy Butcher.

They couldn't be more different: Homelander and Starlight. Image: © Amazon.com Inc., or its affiliates 2020

In the new episodes, too, it's difficult to put everyone involved in a classic black and white scheme. Who is really good anyway? And who is angry? Sure, you'll agree that Homelander is the biggest ass of them all. There is nothing positive to say about him. He is the prime example of "good face to bad game". People love him idolatrously, but they don't know who he really is.

The complete opposite are Hughie and Starlight. They fight against Vought International for the sake of justice and not for selfish reasons. The rest of the Seven and Boys are somewhere between these extremes. They are in the gray area, everyone has something good about themselves, but also shows their dark side. But all characters tend to stay human, no matter what kind of things they do. There are understandable reasons why one or the other sometimes acts so extreme. Well, almost all of them. We'd rather leave Homelander out.

Season 2 is always well over the top

The second "The Boys" season goes one better. The eight episodes are not subtle at any point – Eric Kripke is always full on the twelve. A concept that was successful in the first season. In the run-up, the showrunner announced that season 2 would be even more bloody , and he was right. Kripke has come up with some grotesque scenes that are guaranteed not for the faint of heart with a nervous stomach. The dolphin scene in season 1 was already tough stuff for you? That was nothing. It's much more blatant! Believe me.

The power of social media

Season 2 is also a reflection of our society. Using Stormfront, the series shows us once again how powerful the use (or should I say abuse?) Of social media and the glorification of individuals can be. With Stormfront and Homelander two worlds collide: While the newcomer consciously uses social media to reach his fans, the leader of the Seven relies on classic PR work. "You have fans, I have soldiers," explains Stormfront at one point to Homelander.

The trailer for "The Boys" presented Stormfront as a direct competitor to Homelander. However, she does not smear honey around her fans, but finds clear words – and stirs up fear among the followers. The memes with her are circulating all over the internet, and her popularity soon surpasses Homelander's. "If your uncle posts this on Facebook, you know it works," explains Stormfront, adding, "You don't need 50 million fans, you just have to make five million angry."

One look at the news from the real world is enough to see: this topic of the series is anything but far-fetched …

Conclusion: The new "The Boys" season goes one better

I really didn't expect it, but Season 2 clearly tops the first "The Boys" season. Eric Kripke doesn't shy away from juggling the storylines of the more than ten characters, and he manages the balancing act masterfully. Almost every character develops in the course of the eight episodes, gets more rough edges, and the individual actions are always understandable.

In terms of content, season 2 could hardly be more appropriate and current. The new "The Boys" episodes are a commentary on the current political and social situation, on dealing with stars, on the use of social media and much more. Who, like me, has doubted that season 1 can be surpassed, season 2 teaches you better!

The second season of "The Boys" will air on September 4th on Amazon Prime Video. At the beginning three episodes are immediately available, followed by a new episode every Friday. The finale can be seen from October 9th.