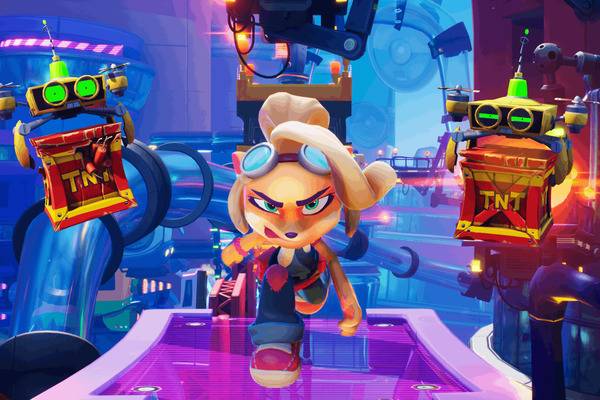 Great news for crash fans: In the live stream of the Gamescom opening night, developer Toys for Bob revealed that "Crash Bandicoot 4: It's About Time" will have rock-hard retro levels. Even unlocking these levels should present players with a real challenge.

In yesterday's live stream of Gamescom 2020, the probably most famous bag badger in the world could of course not be missing. However, Crash had apparently not noticed that Gamescom was only taking place digitally this year and was lost in the empty Cologne exhibition halls. Geoff Keighley, the host of the Gamescom Opening Night, had an interview with Lou Studdert, the producer at the developer Toys for Bob. He revealed that there will be ultra heavy retro levels in "Crash Bandicoot 4", the so-called flashback tape levels.

When Crash and Cortex were friends

According to Studdert, the flashback tape levels are a kind of glimpse into the past of the "Crash Bandicoot" series. The levels even play before the events from the original "Crash Bandicoot". Back then, Crash and Dr. Neo Cortex still friends, Studdert explained in an interview.

The flashback tape levels are difficult 2D platform passages. Players have to estimate exactly at what time and in what order they have to destroy wooden boxes. In addition, extreme precision is required when jumping, because between the harmless wooden boxes there are also highly explosive nitro boxes.

Even unlocking the retro levels is a challenge

To gain access to the retro levels, players have to collect flashback tapes in different levels. However, players can only collect the video cassettes if they have reached them without dying. The difficult access to the flashback tapes is, according to Studdert, an homage to the Death Route levels from the "Crash Bandicoot" trilogy. In order to unlock the special death routes, players in the previous games in the series also had to reach a special platform without dying.

"Crash Bandicoot 4: It's About Time" will be released on October 2, 2020 for PlayStation 4 and Xbox One.

Crash Bandicoot 4: It's About Time Buy now at