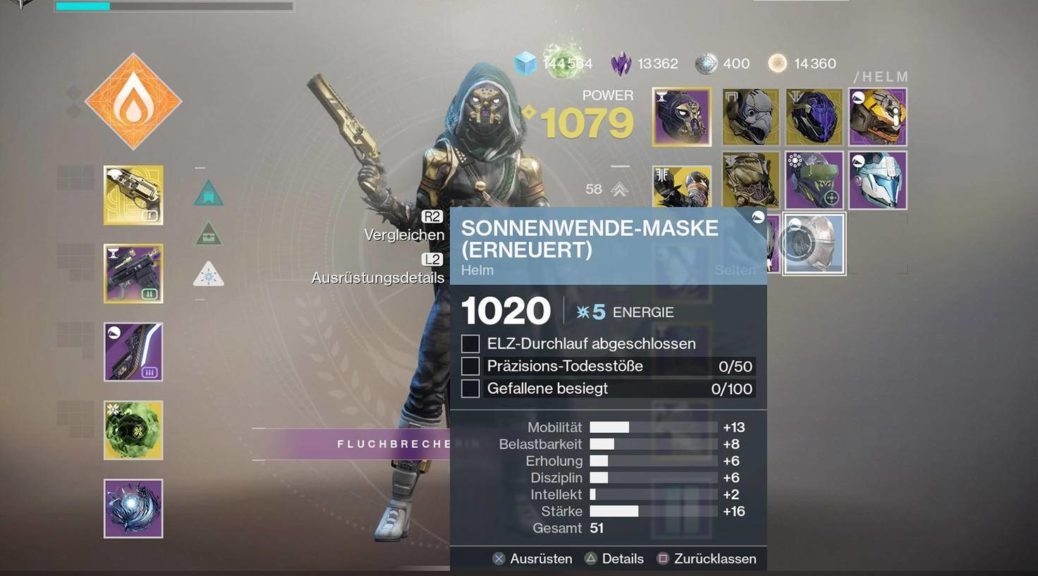 In "Destiny 2" is the solstice of the heroes until September 8, 2020. Eva Levante is back in the tower and has beautiful armor up her sleeve for you. So that it looks and shines properly, you have to upgrade it. We'll show you how.

Traditionally, you begin the solstice of the heroes in the tower, the social hub in the "Destiny 2" universe. Eva Levante is standing there and has a quest ready for you. She offers you a piece of blue armor, a helmet from the Renewed Solstice Armor. You now have to level it up bit by bit so that it becomes a legendary piece of purple armor.

The highlight: the different classes of guardians have different tasks to deal with.

Each piece of armor tells you exactly which three tasks you have to complete.

If you have installed the necessary update for the solstice of the heroes, Eva Levante is waiting for you in the tower. She offers you a blue helmet, your first piece of armor from the solstice set. If you move the cursor over the helmet, it shows you various tasks that you should do.

As a hunter you have to

As a warlock, you have to

As a Titan, you have to

The enemy and precision kills are not tied to the ELZ, you can acquire them in the entire game universe.

After you have completed all tasks, return to Eva Levante. She asks you to meditate in front of the statue on the solstice of the heroes. You will then receive the complete Renewed Solstice Armor Set. You now have to carry each individual piece and do the three tasks that it tells you to do. Once you have done that, you return to Eva and the statue, meditate and your armor becomes "majestic".

If you have earned the Majestic Armor, you can already buy ornaments for it in the Eververse. These add a nice glow to your armor that, depending on your equipped focus, is either purple (void), blue (arc) or orange (solar).

But that doesn't stop there: The Majestic Armor can be upgraded to a Magnificent Armor. This makes the parts a masterpiece. This improves all stats and allows you to add more mods.

To turn the majestic into a splendid set, you have to complete three tasks from each piece of armor. Move your cursor over the armor pieces and you will learn what to do.

Note : For the Magnificent Set, you must complete endgame activities, including the "Pit of Heresy" dungeon and a twilight strike on Grandmaster difficulty. You can usually only do this with a team. It is almost impossible for single players to achieve successful degrees.

Solstice Packages and Key Fragments can be found in your inventory under Consumables.

Is this your first time at the Solstice of Heroes? Then the event can overwhelm you a little. Here's a quick rundown of what exactly is what and what it's good for: