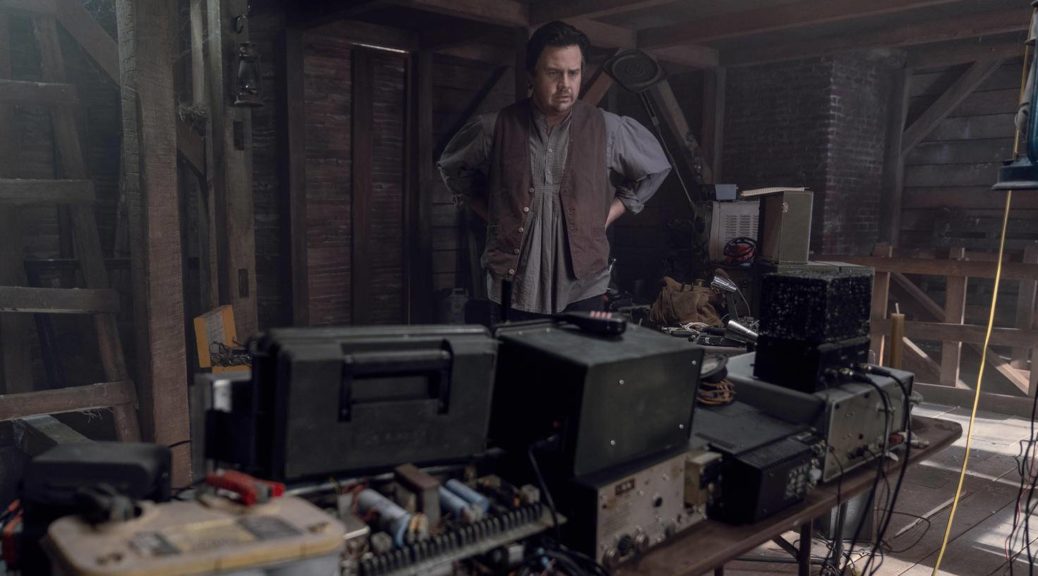 In season 11 of "The Walking Dead" the Whisperers are history, but a new community appears on the scene. And it is different from everything fans have seen so far. If you like: We already explain everything important about the Commonwealth to you.

Already in season 9 of "The Walking Dead" there was a first, small hint at the Commonwealth: In the last seconds of the season finale , the audience was surprised by a female voice from the radio. Ezekiel (Khary Payton) missed his potential interlocutor by a hair, but the fans immediately speculated about who it might be. The Commonwealth quickly became a possible option for many comic lovers.

Season 10 of "The Walking Dead" was followed by the first concrete (mini) reference to the Commonwealth: Eugenes (Josh McDermitt) new "radio friend" Stephanie (Margot Bingham). Both in episode 6, "New Connections" and in episode 11, "Face to Face", the character was represented – but still only as a voice from the radio. In episode 14, "Goodbyes", the small group around Eugene finally set off to finally meet Stephanie.

What is the Commonwealth?

The Commonwealth storyline in issue 173 begins in "The Walking Dead" comics. With around 50,000 inhabitants spread across several settlements, the community is by far the largest community we have so far encountered in the world of the zombie apocalypse. Technically, the Commonwealth is very well equipped, even sports events and concerts are organized in the community. The Commonwealth also has its own type of army.

In the comics, officers in white armor are commanded by Officer Mercer. He is also the personal bodyguard of Governor Pamela Milton and her son, Sebastian. Mercer has little left for both in the comics.

Who is leading the Commonwealth?

The Commonwealth is led by Governor Pamela Milton. It is at the forefront of a community system that is strongly reminiscent of medieval feudalism. Residents are divided into strata, with the assignment based on their occupations prior to the zombie apocalypse.

Residents with everyday professions such as bakers and butchers belong to the lower class. Lawyers and representatives of other higher offices belong to the upper class. The class system and above all the arrogant behavior of the upper class over time cause tensions within the community. In the end there is even a big revolt. Ultimately, Maggie replaces Pamela Milton as the leader of the Commonwealth.

Have we met the Commonwealth leader long ago?

Many fans have long suspected that we already had to deal with Pamela Milton in the series – or rather with her "TWD" equivalent: Georgie. Immediately after Jayne Atkinson made her debut as the mysterious record lover in episode 12 of season 8, rumors of the character's true identity spread. Even "The Walking Dead" jumped on the train and asked fans on Twitter whether Georgie could actually be Pamela Milton from the Commonwealth?

After Eugene and Stephanie have exchanged secretly via radio for some time in both "The Walking Dead" comics and the series, the woman finally agrees to a meeting. However, this does not cause much enthusiasm among her superiors. In the comics, Stephanie is punished for leading strangers to the Commonwealth.

In addition, Stephanie cannot receive Eugene and his team personally. Instead, Lance Hornsby, the Commonwealth accountant, is waiting with a group of soldiers for the Alexandrians. The gruff reception quickly turns into a much friendlier tone.

With his pimped radio, Eugene makes the first contact with Stephanie – and with it the Commonwealth.

The Commonwealth and the helicopter

Several times in "The Walking Dead" a mysterious helicopter caused speculation among the fans. It was quickly accepted by some that this could be a helicopter from the Commonwealth. The fact that Jadis spoke to the crew on the radio about people from groups "A" and "B" at least finally makes sense given the two-tier system of the Commonwealth.

But what about the three-circle symbol that can be seen on the helicopter and on Jadis' supplies? Accordingly, it should be the symbol of the Commonwealth. The problem with this theory: According to "The Walking Dead: World Beyond" the three circles symbolize three huge communities, which together appear under the name "Civil Republic Military", CRM for short. One of them is the young protagonist of the new spin-off series.

In "Fear the Walking Dead" we have already seen the symbol – and the associated soldiers. The CRM is therefore active in the entire "TWD" universe known to date.