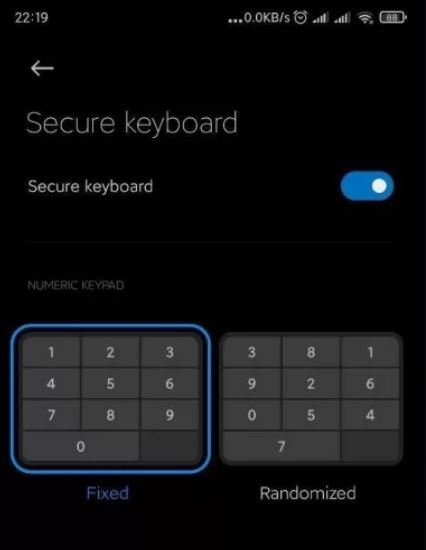 Although MIUI 12 has already arrived loaded with new features, Xiaomi seems to continue moving forward adding new functionalities to its customization layer . This is demonstrated by the latest news added to the MIUI 12 private beta in its Chinese ROM.

As usual Xiaomi has been testing certain features in its MIUI 12 private beta in recent weeks that not only improve its visual appearance, but also add greater privacy for the user.

An example of this is the new secure keyboard, a way to alter the order of the numerical keyboard in order to avoid possible «Keyloggers» that register the location of our keystrokes on the screen. This functionality is widely used by bank applications to promote user privacy.

In addition, altering the order of the numbers, allows us to have greater privacy against prying eyes , thus making it much more difficult to guess the unlock PIN of our smartphone.

Beyond privacy for the user, Xiaomi has started to test new animations for those terminals with an under-screen fingerprint sensor. As we can see below, the animations will be very varied:

In addition to what has been seen, MIUI 12 will shortly bring more customization options for its Always On Displa mode and. Specifically, its interface will be more customizable, allowing you to hide certain elements that until now were shown yes or yes.

Xiaomi's Always On Display will allow us to hide certain elements.

The Weather app continues to improve

Finally, another of the changes that Xiaomi has been integrating into the latest MIUI 12 private betas is a new way to show the various locations established in the Weather application.

Now these go on to show a more striking design, completely adapted to that of MIUI 12 and that of its non-linear animations.

In short, several really attractive changes that we will take to see in the Global version of MIUI 12 but will expand with its arrival the many options that the Xiaomi customization layer already offers us.