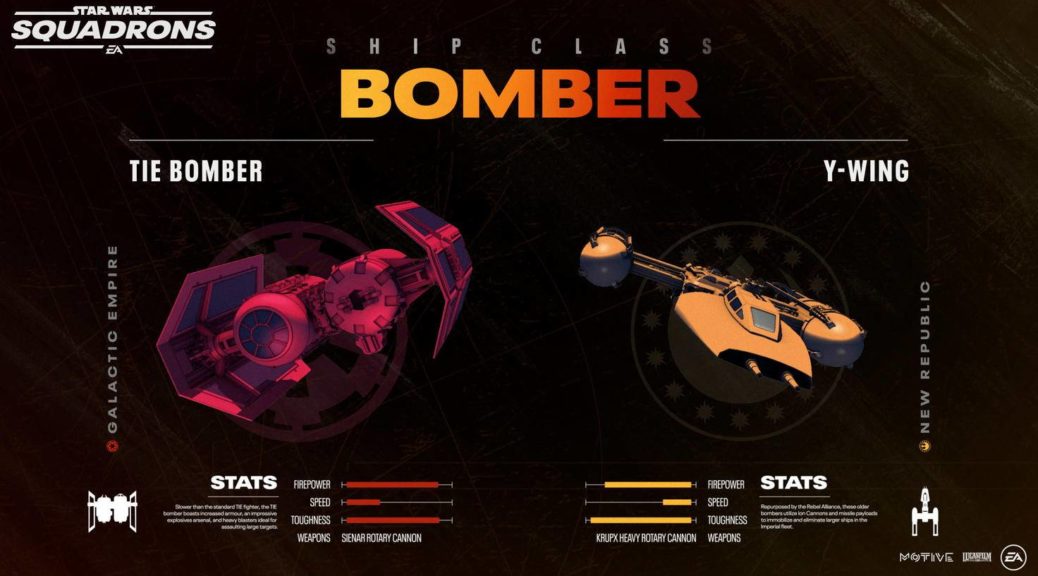 EA has released a pilot briefing on "Star Wars Squadrons". It contains a lot of information about the available spaceships and their capabilities, as well as an explanation of power management. "Star Wars" fans can look forward to authentic Starfighter cockpits that look exactly like in the films.

Players can choose from a total of eight different ships, which are divided into the classes Starfighter, Bomber, Interceptor and Supporter. According to EA's pilot briefing, these are the following spaceships:

So the different classes differ

Bombers can plug in and hand out well, but are lame ducks.

The different classes can all be controlled differently and offer different properties. Fighters are agile, can take a lot of damage and are capable melee fighters. This makes them the best balanced class, but they cannot outperform the other ships anywhere. Bombers are very heavily armored and do a lot of damage, but they are comparatively slow.

Interceptors are the perfect choice for close combat. They are particularly agile and have powerful weapon systems, so they have to do without armor and explode after just a few enemy hits. Supporters are neither particularly agile nor do they have high firepower. To do this, they have defensive and offensive abilities with which they reach under their wing. You can slow down enemy ships with tractor beams, lay mines, place guns, and repair other spaceships.

This is how power management works

In the pilot briefing, we further learn that players can influence the properties of their ships by diverting energy. The so-called power management makes it possible to prioritize certain components of the ship in terms of energy supply.

If players direct more energy into the drive, the maximum speed of the ship increases. If you use all the energy for the drive, you can also use a special boost. If the weapon systems receive a lot of energy, the lasers recharge faster. If all the energy flows into the lasers, they become overloaded and cause enormous damage. Additional energy for the shields accelerates their regeneration, at maximum energy they charge up to 200 percent and do more damage.

Authentic cockpits and "instrument only" mode

In "Instrument only" mode, the entire HUD is switched off.

At the end of the briefing, creative director Ian Frazier affirmed that the designers of "Star Wars Squadrons" placed great emphasis on reproducing the cockpits in the game as authentically as possible. This should provide a real nostalgia frenzy, especially for fans of the old "Star Wars" films.

For professional pilots there should also be an "instrument only" mode in which the user interface (HUD) in the cockpit is completely switched off. Players can then only read the status of their ship on the instruments.

Star Wars Squadrons will be released on October 2nd for PC, PS4 and Xbox One. The game offers crossplay between all platforms.